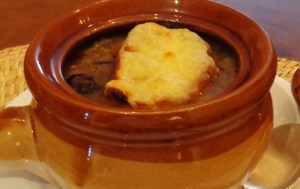 Onion soup with a cheese crouton

This is the perfect comfort food for our annual New Year’s Day adventure.

Each year, a group of hardy sailors venture over to our clubhouse on frozen Toronto Island. Some take the ferry to the other end of the island and walk for 40 minutes. Others take a water taxi, if it’s running and the harbour isn’t too full of ice. Some celebrate New Year’s Eve on the island and stay with friends who live there, so their morning journey might even be accomplished by bicycle if the road has been ploughed. The first group who arrive light our old wood stove and in minutes there is a nice warm fug. We all bring a pot-luck food item to share with everyone. Some years only a handful straggle over, usually due to inclement weather, and other years as many as 30 show up, members, family and friends. The location is one of Toronto’s best kept secrets, but here’s a hint: the Harbour City Yacht Club floating clubhouse is located at: 43° 37′ 15″ N 79° 22′ 53″ W.

I first came across authentic onion soup in Paris in the early sixties. Young Londoners would head over to the city of light for the weekend because London was still a dull city then and Paris was easy to reach on the train. We’d end up in strange gypsy bars on the Left Bank listening to sad songs, or in wild nightclubs like Le Crazy Horse Saloon (much more fun than the Moulin Rouge, until the movie “What’s New Pussy Cat” spoiled it for everyone, by putting it on the tourist map).

Then it was traditional to join the porters and other denizens of the night (whores, drunks and stray cats) for a bowl of steaming onion soup at a stall in the great market at Les Halles. The French government, with a strange disregard for tradition, pulled down the market and moved it out to the suburbs. Something of the atmosphere, and at five o’clock in the morning it was some atmosphere, must have permeated the soup, because I’ve never been able to quite replicate the exact same taste.

Soupe à l’oignon from “How to Eat Well and Stay Single” page 53, by Nigel Napier-Andrews

1. Peel and slice the onions thinly.
2. Heat 1/4 cup butter and 2 tbsp cooking oil in the pan until they are bubbling and the butter has stopped frothing. Add all the onions and immediately turn the heat down to low. Cook the onions very slowly for about 45 min, by which time they should be a golden brown. Sprinkle in the flour and cook for a further 3 min, stirring all the time to prevent burning. (TIP: To further brown the onions add a pinch or two of sugar to the pot and stir in well.)
3. In a separate pot bring the stock to boiling.
4. Take off the onions off the heat, add the stock and mix thoroughly. Add the wine and cook partially covered at a very low simmer for 30 or 40 minutes more.
5. The soup is now ready for serving as it is, or for serving with cheese (see below) or for keeping covered in the fridge until needed.

SOUPE À L’OIGNON GRATINÉE
1. Cut 8 to 12 3/4″ in slices from a French baguette loaf
2. Toast them thoroughly, or bake on a baking pan in the oven at 320°F/160°C for about 30 minutes until they are thoroughly dried out and golden brown croûtes. OPTION: halfway through the baking rub both sides with olive oil; after baking rub each piece with a cut slice of garlic.
3. Float one or two croûtes on each ovenproof bowl of soup, sprinkle on grated Swiss or Parmesan cheese and brown under a hot broiler before serving.

This article was originally posted on January 1, 2013.