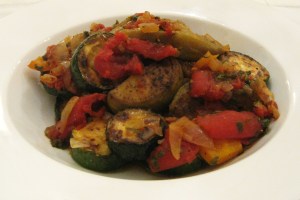 RECIPE: Ratatouille Niçoise, an aromatic veggie casserole from Nice in the south of  France.

DIARY: How to Eat Well and Stay Single, a cookbook for batchelors, gets published … long, long ago.

The air is redolent with the scents of southern France as I cook up a casserole of ratatouille Niçoise, a succulent, rich veggie dish. It takes a bit of time to prepare as all the ingredients are cooked separately and then assembled for a final baking to mingle the flavours. The wait is worth it. Ratatouille can be eaten as a main course, on its own or as an accompaniment to a simple meat dish, hot or cold, and is wonderful as a left-over the next day, when the flavours have, if anything, become more intense and integrated.

I’m thinking a lot about my readers these days, who is reading my blog and what they are getting out of it. After a month with more than a dozen articles published, recipes are running about equal in popularity with travel stories.

My credentials as a cook are simple. I’m not a chef, just someone who likes home cooking. Everything I do I’ve taught myself and what turns out well is usually the result of a lot of experimentation. I found cooking so much fun, and had such an appreciative audience for my earliest efforts, that I wanted to share some of those I made many years ago. Now I want to share more that I’ve come to enjoy since.

Not such a success, as it turned out

I started writing a food column for a Canadian magazine. It was called Success and it wasn’t, folding after less than half a dozen issues. But it did catch the eye of a publisher, who saw one of my pieces and asked if I would consider putting my columns together for a book. It was a stretch to jump from three or four columns in a pseudo-Playboy magazine, to writing a whole book. My friends had to endure months of trials and errors as I slaved away to produce simple food that would be easy to cook, with a guaranteed method of preparation.

I worked out a formula, based on what seemed to work best for me: lay out all the ingredients first to check that I had everything I needed, then lay out all the tools to ensure I had the right weapons for the battle ahead, and finally an easy-to-follow step-by-step list of instructions. Once the experimentation was over, I cooked the food again just from my recipe with no ad libs, to make sure it worked perfectly. The publisher liked my approach and after a lot more work revising and re-checking, a publication date was set.

The book still didn’t have a name, but I was meeting with the late Alan Edmonds, then at Maclean’s Magazine, and before his career as a television presenter, who was helping me fix a travel article that editor Peter Newman had savaged. We patched up the story and repaired across the street for a cheap Chinese lunch, where I told Alan about my planned cook book for bachelors. He wrote an idea on a paper napkin and pushed it across the table. “That will sell,” he said. The publisher and I both thought it was brilliant.

“How To Eat Well and Stay Single” enjoyed a modest success in paperback and though it has long been out of print, I’ve never stopped cooking.

Now about the girl on the cover, who the attentive reader will have spotted also appears on Success. The publisher, a woman I might add, thought it would enhance sales if we put a girl on my book. The art director had the idea of having her curled up on a plate, and naked. I imagine it was supposed to be an ironic comment on the sexual mores of the times. Who knows if it sold any more copies, but it certainly brought a rush of publicity to our book launch.

by Nigel Napier-Andrews, How to Eat Well and Stay Single © 1974
Shopping list
Preparation and cooking
Notes
Serve as a hot veggie appetizer, a veggie main course, as a vegetable accompaniment to simple meats, such as roast beef or lamb, roast whole chicken, grilled chicken breasts or thighs, or as a cold accompaniment to cold cuts… I taste test this recipe before, during and after photography. Honestly, the next day it’s even better.
As Julia Child would say: “Bon appetit!”

This article was originally posted on January 13, 2013.

Tagged as: How to Eat Well and Stay Single, Ratatouille Niçoise