Travelling far afield can be fun or a big pain. We’ll test our limits.

It starts as a casual conversation over breakfast. “Where shall we go this year?” Diane asks. We consider France again, Switzerland, Italy, Spain or further afield, Morocco, even Turkey. “Would you like to go back to East Africa?” she says. “Hmm,” I reply, quite uncertain.

We could start out in Nairobi, staying at the historic Norfolk Hotel, now run by that excellent Canadian company Fairmont. Evening sundowners on the Lord Delamere Terrace are a must. Then off in a couple of Land Rovers with a group of companions for the next couple of weeks to make the great circuit through the game parks. 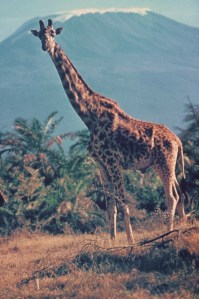 If you are very fit and have the stamina, the hike up Mount Kilimanjaro (kilima is mountain and njaro is shining in Swahili) is truly spectacular. The “shining mountain” stands 19,340 feet out from the dusty African plain, capped with a white rim of snow and ice, visible from a hundred miles away. Let the porters do the heavy lifting, because the altitude will get to you until you become acclimatised. Even Nairobi, the capital of Kenya, where we start our trip, is at 1,795 metres or nearly 6,000 feet.

The hike up the tallest mountain in Africa, and the highest free-standing mountain in the world, takes you through several wondrous landscapes from rain forest teeming with flora and fauna to bleak rocky slopes. There are giraffe and zebra on the plains around the mountain. Varieties of monkeys entertain as they swing through the trees.

The best way to make the final assault on the top is well before dawn. There are two reasons for this and the principal one is safety. As the morning sun heats up the frozen slopes, rock slides can occur, but if you are past the danger zone in the dark you will be quite safe. The other reason is the view of sunrise from the roof of Africa. You can see hundreds of miles in every direction on a clear day, even far off Mount Kenya to the north. The ascent takes several days, the descent but a day or two and you will be back in your lodge ready for a hot bath and a cold beer before you know it.

The contiguous Masai Mara in Kenya and Serengeti in Tanzania are well served by tour operators, and you can be guaranteed a sight of each of the big five game animals (buffalo, elephant, leopard, lion and rhino) as well as occasional sightings of cheetah and hundreds of deer, zebra, giraffe, wart hogs, hippos and more. The annual migration, when two million wildebeest and zebra set off, is a truly awe-inspiring sight, with many moments of drama as the animals are stalked by predators on the plains and attempt the dangerous river crossings full of massive crocodiles.

The Ngorongoro Crater is a spectacular sight in itself, the largest complete crater in the world, 16 kilometres wide. More than 25 thousand large animals live within the high, steep walls around the rim.

A lone old bull in the Serengeti

If you want to see thousands, even millions, of flamingo then Lake Nakuru National Park in the Rift Valley is the place to go. From the slopes of a nearby extinct volcano,you’ll see the constantly changing colours of the vast flocks of the scarlet, black and white wading birds. The park has been expanded over the years and is now also a black and white rhino sanctuary, giving you a rare opportunity to see one of these lumbering tanks up close.

Back to our wish list. Hot air ballooning over the Masai Mara sounds like great fun, but I’m not convinced Diane and I are up for the travails of travel through East Africa. Is there still time to see the continent of lions and elephants, of giraffe and zebras, crocodiles and hippos, birds by the zillion, vast savannahs, ethereal jungles, the largest, longest crack in the Earth’s surface, and given my fascination with sunsets, more of those that one can imagine?

The answer is: I’ve been there, done that and done it before the poachers really got going and colonialism collapsed into the modern morass of corruption and unrest. Diane thinks she will give it a pass. There are downsides too: first, the distances are vast, as they are in Canada, and it does take time to see what you want. Second, the political situation can be very fluid and sometimes dangerous, if the locals decide to get upset. Third, it is still third world territory and hygiene and  health standards are lower than you might be used to.

Having said all that, if you book with a reputable operator and check them out thoroughly, you can have the trip of a lifetime in East Africa. 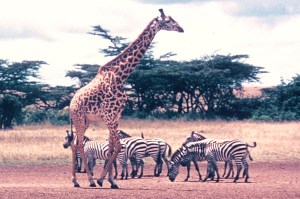 Great herds in the Masai Mara

At the beginning of my career I spent two years in the small Kenya town of Nakuru, in East Africa. Quite fortuitously, on my second day there, at the Rift Valley Sports Club I was introduced to Mervyn F. Hill, editor of the Kenya Weekly News and prolific author of books on Africa. He offered me a job and the following week I started as a very junior editor on his colonial newsmagazine.

I learned the writing trade editing the society notes and obits (known internally as hatches, matches and despatches) and covering very unimportant meetings of the council. Sometimes opportunities came in over the doorstep of the editorial offices that no one wanted to take up and these were handed to me.

A safari lodge launch took me north to the land of the Samburu, around Lake Baringo. Spectacular, raw landscape, accommodation only half-finished and the plumbing wasn’t working at all. We were advised not to drop the soap in the lake while bathing or the giant catfish would eat it, and only wash on Thursdays, since that was when the giant crocs went up to feed at the other end, by the fish packing plant. How do you write that review?

I wrote about the opening of Lake Nakuru National Park in the Rift Valley, when the great naturalist Peter Scott cut the ribbon. I wore my old school tie, which he recognized and singled me out of the crowd for a nice chat, mostly about Oundle School in England, which we had both attended in our day.

Boy reporter cleaning up garbage on the roof of Africa

The most gruelling job was to cover the Outward Bound School, on the slopes of Mount Kilimanjaro, by actually going through the three-week course and climbing to the top. We did it the hard way, carrying our own huge packs of supplies, without porters, starting from our base camp at Loitokitok on the Kenya border and climbing up to the rain forest in Tanzania and then through a variety of arid mountain climate zones to the peak above a glacier.  Some sunrise that was.

Experiences of a lifetime, as some of these original slides from long ago show. Perhaps best not to go back, but forward to new places.

If you go say Jambo, habari gani? (Hello, how are you?) for us. They’ll say mzuri sana (Very well). The only other Swahili phrase that is essential is Wapi choo? (Where’s the loo?) Have a good safari.

All photos (from 35mm Ectachrome slides) are originals by Nigel Napier-Andrews.