RECIPES: English trifle, and a quick sponge recipe to make it perfect, plus Zuppa inglese and Tiramisu, two Italian versions.

DIARY: Antics in a TV kitchen with Bob McLean.

For several years I shared directing duties on The Bob McLean Show, a live daily hour-long chat show on the CBC TV network. It was successor to Elwood Glover’s Luncheon Date, which I had produced and directed earlier in my career. Bob’s show had a bigger staff and a better studio, with a house band, a chat area,  another area for singers or live demos and a live audience. We worked one week in the studio and one week in the office preparing the following week, not a tough assignment as I recall the researchers and show bookers doing most of the work. Suffice to say, I had time on my hands and was asked from time to time, usually in an emergency when a guest had failed to turn up, to step in and do a cooking demo during my off week.

My other week colleague and the executive producer dreamed up a Cavalcade of Nations to feature guests and food from various countries. As the resident Brit and cook on the show, I was tasked to handle a segment to prepare some typically English food. It came with strings attached in the shape of three requirements. First, they wanted a main course and a dessert that complemented each other. Then they needed foods that could be prepared on a four-ring electric counter-top stove, warning me that only three of the rings were guaranteed to function. Finally I had 15 minutes with a two-minute commercial break somewhere in the middle. 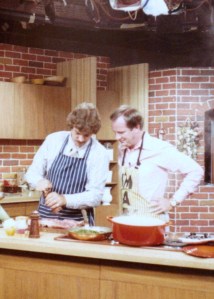 Thank goodness in television one can cheat. Even on a live show it’s possible to take short cuts that aren’t seen on camera. After much thought and careful research, I came up with the required dishes, which were then to be published in advance in a CBC booklet containing all the other contributions. There was no going back, once the recipes had gone to the printers. I had offered to prepare stuffed shoulder of lamb and other trifles.

Show day finally arrived. I had prepared all the dishes in the kitchen the night before. The braised stuffed shoulder of lamb looked succulent. It was accompanied by caraway infused cabbage, which added a touch of green. English trifle, a sherry soaked confection topped with custard and strawberries, would be dessert. Another complete set of ingredients was semi-prepared. When all was ready, everything was carefully packed up and delivered to the studio.

“Welcome, welcome,” effused my colleague. “We’re cutting you back to 11 minutes. We’ve had to fit in the Pearly Queen to sing a medley of cockney songs. So you’ll just have to speed everything up. OK?” And before I could reply he was off to huddle with the very smart gent from the British Travel Authority.

The night before, I had timed every move, just as Julia Child did before each of her French Chef performances. Even taking short cuts, I figured it was impossible to get through the three recipes in less than 20 minutes, so hearing the news of the time cut, a mild form of panic began to set in. 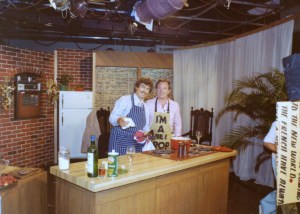 Still smiling during a commercial break

Once the “On Air” sign lit up, a real panic did set in. I was prepping my stuff in the kitchen set, half listening to Ms. Pearly massacre the English language with a phony cockney accent. Suddenly I realised that the dear lady had decided to add an extra round of choruses to her medley, egged on by enthusiastic participation from the audience. The gallant band had no alternative but to follow along.

“How long have I got?” I asked the studio director during the commercial break. “Nearly eight minutes, including Bob’s intro and wrap,” he replied, failing to notice the mad look in my eye. The show must go on, but I did seriously consider opening an artery in the tradition of Dan Aykroyd’s hilarious SNL Julia Child sketch, leaving Uncle Bob to carry on.

As you can imagine, it was crazy and I ended up throwing eggs at the studio director on live network television. Fortunately, the audience took it all in fun and laughed until they rolled in the aisles. To this day I have never cooked braised stuffed shoulder of lamb again, and for that and another reason, I’m not going to share that particular recipe with you today.

Let me explain the other reason for no longer cooking lamb. Diane grew up in one of those parts of England where the spring countryside is dotted with little lambs gamboling beside their mums on grass-green meadows. Then, the lambs are separated from the ewes. There is a pathetic bawling as the lambs call to their mothers from their fields on one side of the road and the ewes answer back from the other side.  One day, she recalls from childhood experience, a deep silence falls over this bucolic scene – the silence of the lambs indeed. The babies have all gone off to slaughter and the mums are left disconsolate and childless. This was all too much for a young Diane and to this day she has not been able to bear the thought of lamb as food. In the interests of domestic harmony, I go along with her preferences. I dare not get her started on milk-fed veal (Provimi) or pâté de foie gras.

Back to the show: after we were off the air, the crew descended on the kitchen, as was their habit, for free samples. The English trifle disappeared in minutes and was declared the triumph of the day, so I will share that recipe with you.

You seldom see this delicious and authentic English dessert on restaurant menus, except perhaps on buffet tables, but English kids look forward to it on high days and holidays without exception. Italian restaurants have long disguised their own take on this old favourite as zuppa inglese or tiramisu.

This is an easy recipe. The baking soda provides the lift and reduces the number of eggs.   TIP: Make this the day before, or at least a few hours, as it must be completely cooled to use.

1. Preheat the oven to 325°F/165°C or moderately slow. Separate the eggs into two bowls. Beat the egg yolks, hot water and vanilla essence together until thick. Slowly beat in 1/2 cup sugar and set aside when well mixed.
2.  Beat the egg whites until they are stiff, then add the salt until they will hold their peaks. Beat in the remaining 1/4 cup of sugar.
3. Stir 1/4 of the whites into the yolk mix. Using a sieve slowly shake the flour and baking powder into the bowl and stir. Gently fold in the remaining egg whites.
4. Spoon into the pan and bake 25 to 30 min, until a toothpick comes out clean. Invert over a rack and cool.

NOTE:
Zuppa inglese: Essentially the same, except half the custard is mixed with chocolate, and lady fingers are used instead of sponge. Sweet Italian fortified wine such as Marsala replaces the sherry. The jam is omitted.
Tiramisu: Here espresso coffee and mascarpone are whisked into the custard, the lady fingers are soaked in espresso and coffee flavoured liqueur and the topping is a mixture of finely ground espresso beans and cocoa powder.

POSTSCRIPT ON BOB McLEAN: Sadly Bob died in 2014. I was very pleased to be asked to contribute to his lengthy Globe and Mail obituary, by Susan Ferrier McKay, a former colleague and researcher on Bob’s show.

This story and these recipes were originally published on March 8, 2013 and have since been edited.