Our bucolic meanderings along England’s south coast bring us to the New Forest in Hampshire.

It is the oldest royal forest in England, created by William the Conqueror for deer hunting in about 1079 AD. It was seen as “new” at the time, I suppose. We’re here to visit relatives, recapture childhood memories and explore possibilities for future residence. Let’s dismiss the latter first. We are shown a number of over-priced, yet dilapidated properties. No one has heard of tidying up a house before showing here. Staging a property is an unknown concept. We are shown one place, where the former owner has gone into a home. “It’s in need of a bit of refurbishment,” says the estate agent. “With a bulldozer,” adds Diane. Actually, that’s an understatement. And they’re asking over half-a-million pounds for the dump. So we’re not going to come here to live, that’s clear. But what about a place to visit? That’s another matter. 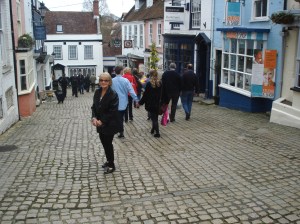 The New Forest lies just west of Southampton, an easy run down the M3 Motorway from London. There are two small towns in the National Park, Lyndhurst and Brokenhurst, and a number of villages. On the southern border is the lovely Georgian market town of Lymington, where we make our headquarters for a week. It’s on the water and has two decent yacht clubs, of interest to a sailor like myself. Visible across The Solent is the Isle of Wight, and car ferries depart every hour or so. To the west lie a number of seaside resort towns, a pleasant afternoon drive, with some good beaches, pubs and hotels to visit. 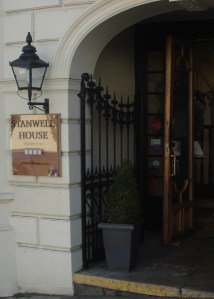 Stanwell House Hotel has a covered courtyard for breakfast, afternoon tea and cocktails, a small dining room and a smaller bar. We have a ground-floor room overlooking the garden, very private and decorated in pink and silver sixties furniture that looks like a Hollywood set. It’s quirky and unexpected in an 18th century establishment. Apparently every room is different. Parking is across the road through a lane with one notable curiosity. It’s a shop offering pedicures, where one’s feet are left for 20 minutes in an aquarium of tiny fish that eat off the dead skin. I have to try it. The fish tickle. Diane, who is very ticklish, declines. We are right in the middle of the main street, which closes for Saturday’s market, and there are several good pubs, coffee shops and restaurants as well as the ubiquitous Indian restaurant. We take daily walks along the quayside, where there are more good pubs. It is a hospitable and friendly town, a perfect base for our explorations.

Take a walk down Church Lane and look at the crinkle-crankle wall. The wavy wall is supposed to have been build by exiled Hanoverian soldiers during the Napoleonic Wars, who lived in the adjacent house. I was unable to find a mention of this type of wall on Wikipedia, so I thoroughly researched and wrote the entry. I believe my commemorative plaque is in the mail.

On another trip we stay in the forest village of Sway. The night before we have succumbed to driving fatigue and put up in a horrid place, so we fall on the mercy of the receptionist at the boutique Sway Manor Hotel and beg for a decent bed. She sees us into a huge room, with a massive bed which swallows us in downy comfort, overlooking the gardens. Cotton sheets. Heaven. The back of the old house has been enhanced with a dining room and bar in a glassed-in terrace where we enjoy several meals. Robert Towle, and his business partner Trevor Dymond look after us very well. 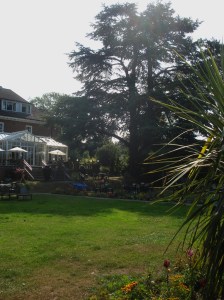 We venture into the New Forest for several expeditions. One is to have dinner at Hotel Terravina and visit owners Gerard and Nina Basset (see my blog of February 3, 2013). They are charming and hospitable and the food and wine outstanding, as one would expect of the official “Best Sommelier in the World.” Another is to have lunch with some of Diane’s relatives at a classic forest pub near Lyndhurst.

Diane is disappointed that the forest is more heath than trees. It’s dramatic, but not like her childhood Sherwood Forest. I suspect there were more trees here before the Royal Navy started building ships of local oak. During my childhood, my expatriate dad rented a home-leave cottage in the historic village of Beaulieu. The garden ran down to the river and we fed the wild ponies apples from the orchard. As locals, we were allowed in the back door of the abbey, which led to a rudimentary car collection and the Montagu family stately home. Now the National Motor Museum is an impressive operation run by a trust. It has a monorail running through it. 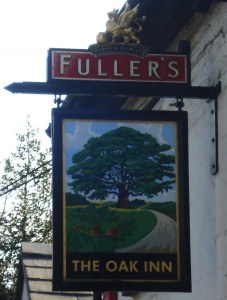 The James Bond car exhibit has been extended for another year until after New Year 2014 and is well worth a look for fans. Most of the 13th century abbey was destroyed during the dissolution of the monasteries in 1538, when the current Lord Montagu’s family took over. They still own most of the village and, curiously, the whole of the Beaulieu River, one of the last privately owned rivers in the world.

During motor rallies in the 60s, I’ve stayed in the quaint rooms at the Montagu Arms Hotel. We have lunch there in the much updated dining room, which now boasts a well-deserved Michelin Star. The hotel, which dates back to the mid-1700s still has a fire burning in the lounge, where we have after-lunch coffee, a cosy atmosphere and lovely gardens. 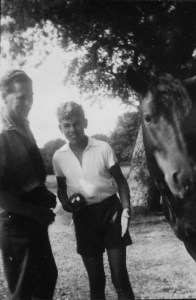 Our rented cottage is still there, just outside the back gate and the start of a brisk walk to Buckler’s Hard through the woods. This visit we drive and enjoy the recently renovated Maritime Museum and ship yard. There’s not much sign of the latter, but three great oak ships of the line which fought for Nelson’s victory at Trafalgar, were constructed here. It took 40 acres of 100-year-old oak trees to build each one, hence the location on the edge of the forest. The museum is a gem, as are the historic worker’s cottage and chapel. No sign of the raft I built as a kid for ferocious battles with pirates. Perhaps it is still being restored. Most of the houses in the hamlet are privately occupied, which gives the place a pleasant lived-in feel. The day is cool, or we would have enjoyed a river cruise to the sea and back.

Diane’s cousin lives on the coast, just south of the park, with the waters of the English Channel literally lapping the dock at the end of their garden. We have a hilarious afternoon BBQ there, eating well and watching the smaller members of the family swim in the freezing water from which they emerge covered in estuary mud. On our next visit they promise to take us to their exclusive bathing hut on the sand spit that protects the bay. The cousin hoses the grandchildren down in the aptly named mud room. Their town is even more aptly named Mudeford.