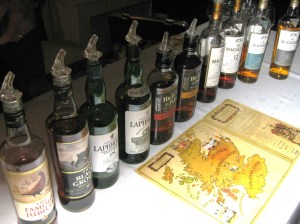 DIARY: A nosing of jolly good scotch in honourable company.

When I started blogging about the good life, I thought I would exclude boring old Toronto from my considerations. Now that our town has advanced to the fourth largest city in North America, after New York, Los Angeles and Mexico City, and ahead of our perennial Great Lakes competitor Chicago, I’ll have to change my parameters. In fact, of course, Toronto is not dull, else why would so many of us bon vivant Brits and Anglophiles made it our home for so many years.

At a social gathering the other night I chat to the son who is now running Toronto’s oldest restaurant (Barberian’s), a man involved in online gaming in Costa Rica, a professional Scotch ambassador and a charming woman wearing an ornate gold chain with the title Deputy Master. Hardly a dull crowd.  We have met under the auspices of an organization that has its only Chapter, outside the City of London and approved by the Lord Mayor, in TO. Take that NY and LA.

It has a long title: The Honourable Company of Freemen of the City of London of North America and one of our friends is a past Master of The Company, as they call it. In years gone by, I have sat on their Court and helped them with their events and communications. Members have links with London, England, although at the time I was a board member, I believe I was the only actual Londoner involved. I felt I already had the freedom of London by right of birth.

The Company supports a charitable scholarship which sends a student at the University of Western Ontario, London, to study in the other London. The Freemen are nothing to do with similarly named right-wing extremists. Their title refers to free men, as opposed to indentured serfs, in London in the middle ages, who formed guilds, or companies, to pursue their various trades. Current members are either inducted into the Guild of Freemen, or one of the other hundred or so Worshipful Companies, such as Goldsmiths, Fletchers, Launderers, Clockmakers and Grocers. The latter Company founded my old school, Oundle, in England in 1556, so their charitable roots run very deep. I’m very grateful to the Worshipful Company of Grocers for a fine education. It’s not onerous (or even expensive) to belong and the Freedom Ceremony at the Guild Hall in the City of London is historic. Benefits include the right to drive sheep across London Bridge free of tolls, a right not currently encouraged in the Exclusion Zone.

We are at a Company fundraising event held at the British Consul’s Forest Hill residence. We have been promised a Scotch tasting, or nosing, and I am unable to resist my friend’s invitation. After making pleasantries with the Deputy Master (contrary to my headline, she’s only the second woman to hold the masculine sounding role) and the Consul, who has so kindly made his home available, we head for the table set up by Scotch Ambassador Marc Laverdiere. No kilted Scotsman he. Marc hails from Quebec City, but clearly knows his stuff. He holds up to 200 Scotch tastings a year and is a fount of knowledge. He represents the Edrington Group who own a number of very fine distilleries in Scotland. I work my way down the bottles on display — two Laphroaigs (La-froyg), two Highland Parks, four from The Macallan and by way of a change, two blended Scotches, upscale versions of The Famous Grouse — an impressive sampling.

Marc explains that he has included two blends because, although by law they contain at least 51 per cent grain whisky, the balance is made up of some splendid single malts from their range. The exact proportions and ingredients are a secret, of course, known only to the distiller, but he hints that plenty of Highland Park and Macallan dresses up The Famous, with Laphroaig in The Black. I’m game to try these two blends, although they compete with my favourite Johnny Walker. Johnny claims to be the world’s favourite Scotch. Grouse claims to be Scotland’s favourite. It will be a close race. 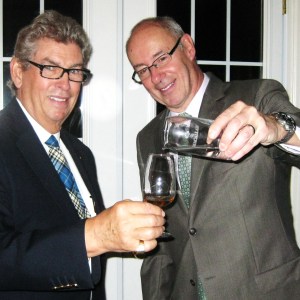 The Famous Jubilee Blend — not easy to find, but available in selected liquor stores, it’s quite different from bar grade Grouse. There are lots of flavour notes running around here, notably sweetness.

The Black Grouse — better and easier on the palate, and competitor, I suppose, to Johnny Black, the dominant note is peaty. For those who like this sort of thing, this is the sort of thing they like.

Macallan 10 and 12 — I skip these offerings and head for their elder brothers.

Macallan 15 — still light, like the 10-year-old, but less malty. Five more years in the cask adds more complex wood notes. Marc tells me to look for vanilla and orchard notes of apple and pear.

Macallan 18 — Another three years in the cask and the fresh orchard notes have melded into a Christmas cake dried fruit mode. Marc adds a drop of water and immediately a rich butterscotch flavour is apparent on the nose. An outstanding Speyside single malt.

Laphroaig Quarter Cask — matured for its first few years in old Maker’s Mark Kentucky Bourbon casks and then given a year in smaller casks where greater exposure to the wood ages it faster, this has more complexity than one would expect. Though the age is not stated, it’s probably a 10 year old whisky.

Laphroaig 18 — Saving the best for last I clearly identify notes of chocolate. This iteration is sweet and peaty, as you would expect from an Islay malt.

Highland Park 12 and 18 — I pass on these two single malts from Orkney, as I have them in my Scotch Bucket and know them well.

What I’ve sampled now adds up to more than two Gentleman’s Portions, so it’s time for us to go home in a taxi and let the Consul have his dinner. It was a signature Toronto evening with many old friends, both people and whiskies.

This article was originally published on March 28, 2013.