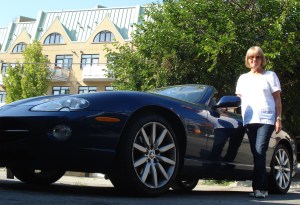 Nothing quite beats the fun of driving a convertible.

The last day of winter one year, I drive down University Avenue in Toronto, the sun shining brightly, the temperature hovering around zero. The wind whips through my hair, the heater sends a steady flow of hot air around my lower body and the seat heaters keep my bum and back warm. Driving my convertible Jaguar XK8 topless is an exhilarating sensation. I’m sure I have a silly smile on my face, happiness so complete, I cannot keep it inside. When I pull into the forecourt at the sparkling new five-diamond Ritz-Carlton a doorman and two valet parking attendants cluster around. Would sir like valet parking? Indeed, sir would. And would sir like a car wash? Good idea, I said looking at the few spots that had collected around the wheel arches. Lovely car, says the doorman, who has seen a few luxury cars come and go, I’m sure. It’s my last car, I reply, they’ll have to pry the keys from my cold dead fingers.Actually, the Jag doesn’t have keys. It has a clever little fob which I keep in my pocket. As I walk up to the car, it recognizes me and unlocks the doors. Nice car. Put the top up before you wash it, is my parting shot. Ha, ha! says the valet.

This luxury car, the purchase of which I cannot possibly justify on any economic grounds, may be my last convertible, but my first was about as un-luxurious as one can imagine. As a young journo, I bought a broken down old English Ford Prefect, fixed the engine, ripped the body off and covered it with a sport kit. Half way through the process, I read the instructions. Turns out I had removed an important part of the car’s structure, and ever after the car had a curious flexing quality when I went over 40 mph. Truthfully, it wasn’t really a convertible since it had no top, merely a tonneau cover for the passenger seat. No doors either. And just a sports windshield in front of the driver. Passengers, when any were brave enough to come with me, got the wind in their teeth. 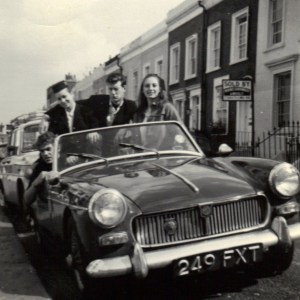 Later in London, my BFF Paul went on a BBC assignment  to Canada. Eventually, I took over and he returned to England. While he was away he lent me his MG Midget for the summer. He was a generous chap then, and he is still today (see my blog of December 6, 2012). Putting the top up and down was a labour of love on any Brit sport car, usually involving at least one crushed finger. Crossing a viaduct on the way to Canterbury, one rainy windy evening, a huge gust tore the top off, and it flew away, never to be seen again. Fortunately there was a tonneau in the boot and I found if I drove fast enough the rain swept over my head. Electrics were by Lucas, Prince of Darkness, so if I put the heater on, the lights dimmed and the wipers stopped, so it was a cold journey to say the least.

In Canada, nobody had convertibles, except Diane (we both emigrated within six months of each other, but in spite of many mutual friends, did not meet until four years ago). She’d had an Austin Healey Sprite and then a Triumph Spitfire in UK and, in Canada, an MGB and a progression of European sports cars, before settling down with a succession of Jaguars. Diane likes to go topless too. The joke about Jaguars used to be that the second seat was for the mechanic and the height of masochism was to own a 12-cylinder version. But after Ford took over, the strange Brit attitude to car making succumbed to Ford’s “Quality is Job 1” message. Meanwhile I’d gone the 3M route — marriage, Mississauga, mini-van. With three kids and a dog, the latter was the only sensible route. Thirty years later, I was down to a tiny apartment, a bicycle, and a small sailboat.

Diane wasn’t impressed by the apartment or the bike, but she liked sailing. For the first couple of days after we met at a party, we took taxis. I didn’t know she had a midnight blue Jaguar XK8 stashed away in the garage. The first time we took it out, for a Sunday brunch at Le Select Bistro, she let me drive, but insisted on putting the top down. It was a brisk March day, exactly four years ago. Nice car, offered the parking lot attendant. It was.

That summer, the lease was up on the Jag. Jaguar Leasing was going out of business with the Tata takeover and I decided to ignore common sense  and buy the lease out myself. However, we couldn’t come to terms, so we started looking at Mercedes convertibles, when the salesman at Grand Touring Auto phoned. A rich lady, whose husband drove a big Roller, had turned her Jag in with only 2,000 K on the clock. The boot was too small to take her golf clubs. Were we interested? Since neither Diane nor I have ever played golf, the size of the trunk would not be an issue. 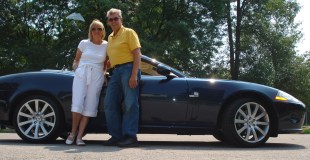 En route to Connecticut in the new 2009 XK

For me, it was love at first sight. The paint was a metallic indigo that looked as deep as a star field.  The interior was butter smooth caramel leather with a glossy burled walnut fascia. We took it out for a test drive. The top folded down into the boot, using up most of the space, unlike the existing model, where the folded top sat outside. The high performance tires gripped every corner.  The muffler had a distinctive masculine growl, unlike Diane’s Jag which purred in a ladylike fashion. Good car, it likes me. The deal was right and I bought it on the spot.

Our inaugural run is down to Norwalk, Connecticut. The boot will only take a small overnight bag, but it’s summer and we are dressing light. We set off before dawn, top down of course, heater on and wind in our hair. We pass by the glorious Finger Lakes region and then through the winding hilly Poconos, crisp green country. We pull into our friends’ circular driveway in time for cocktails. Eight hundred K. Eight hours driving. If we average 100 K an hour, then we must have been going a little bit faster when there was no one in sight, but I wouldn’t admit it in court. In the whole journey no one overtook us. The speedometer goes up to 270 K and I didn’t even do half of that. Honest.

The next day other friends take us out to lunch with their family and we head back to their estate for a visit afterwards. I’m feeling very chirpy as I pull my almost new convertible into his driveway behind his Ford Explorer. We talk convertibles. He invites me to the garage to see his. It’s a Bentley Continental GT. Convertible. Beside it is another one. His wife’s. 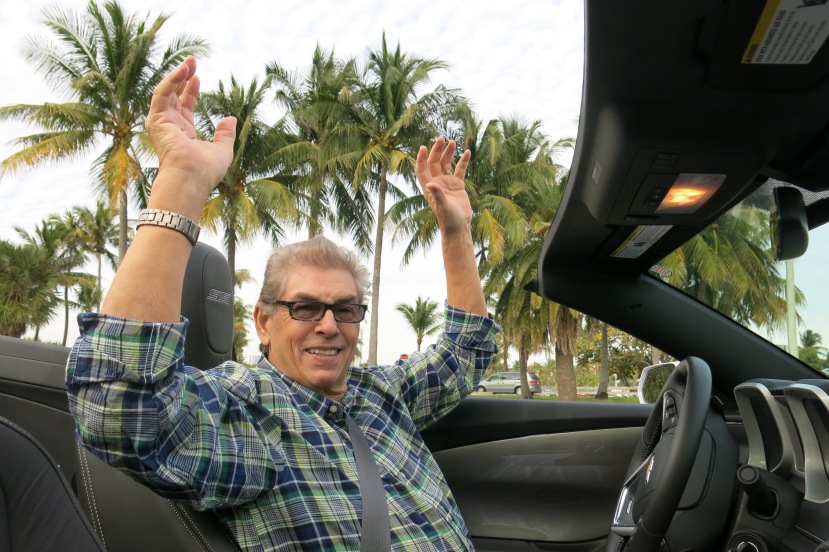 Featured image – topless again, in a rental this time, in South Beach, December 2014