THE END OF THE ROAD 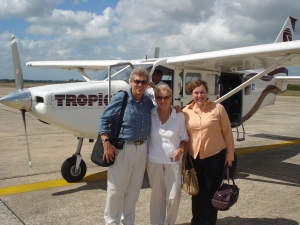 Travel to smaller countries, dare one say third world ones, can be an adventure in itself.

Flights seldom go direct and Belize is no exception. We endure the dreadful turmoil of Miami International Airport, though it turns out to be worse on our return journey. Coming off our plane we are directed to put our luggage in a particular spot by a really large Latino woman. She’s got curly orange hair and long painted talons in clashing red. She bulges out of her uniform in all the wrong places. Without hesitation, we put our bags where she tells us. Not there! There! She screams. I hope I never have to go through MIA again. Indeed, this may be the last trip I make where I have to change planes. It’s a thought.

Outbound, we stay at Belize City airport no longer than necessary and find our way onto our six-seater puddle jumper. I enjoy little planes, even though they react to every puff of wind. I can see the wings and the propellers. I can talk to the pilot. We are low enough that we are in touch with the ground. As we fly south along the coast, the spectacular 350 mile long barrier reef draws a distinct line across the horizon. The crystal clear water is every shade of blue and green. I can hardly wait to jump in.

Tropic Air delivers us, after a bumpy ride through the clouds, to the grassy strip in Placencia. The runway crosses the main road down the peninsula and the locals know when not to risk a crossing.

We are spending a few days in the village before picking up our chartered catamaran for a week cruising the lagoon inside the barrier reef, second only to Australia’s Great Barrier Reef. The taxi drops us under ‘The Tree of Wisdom,’ the only landmark the hotel has given us. Placencia is a backpackers’ haven, the end of the road, if you can call it a road. Some parts of it are no better than a river bed. Apparently the government has promised a new road. They’ve also promised a new airport. The locals don’t seem to rely much on government promises. 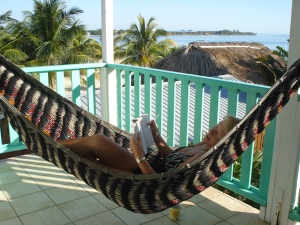 One benefit of visiting the former colony of British Honduras, is that everyone supposedly speaks English, except for our taxi driver who speaks a patois that is almost impossible to understand. I don’t think the Brits did much for the education system before they left. Or the roads. Or the phone system. They left the beaches alone, thank goodness. They’re perfect.

We haul our bags along a path between some shacks until we come to the main drag, another sidewalk that runs from one end of the village to the other. It’s just over a kilometre long, about a paved metre wide, and according to the Guinness Book of World Records, it’s the narrowest main street in the world. There are gift and clothing shops, restaurants and beach bars along its length, but apart from no cars, it doesn’t have much to recommend it.

We check into the Seaspray, on the beach with a small snack bar attached, picked somewhat at random from Trip Advisor. Our room is primitive, with a king size bed and a small balcony with a hammock. The sheets are well worn polyester. Less good for sleeping. The sand is golden. The sea is lukewarm. There are palms for shade. North of the village are some bigger hotels, one owned by Francis Ford Coppola, with film star prices. But we want to be close to our charter base, so the village is it.

We’ve brought Kat with us. She’s a highly experienced professional sailor with a lively sense of humour. She’ll help me get accustomed to driving our chartered catamaran, which is a bit like a large motor home, but all that is available for hire here. Kat and I walk down to where the Moorings base is shown on the map, only to find that it has just moved to the upscale hotel strip, a taxi ride north of the airport. So much for our carefully laid plans.

Apparently a storm took out all the docks, so they’ve moved to a new marina on the lagoon. Returning from the largely abandoned native fishing boat docks, we pass several cheerful ladies cooking over BBQs made from cut in half oil drums. Normally, I never eat street food in the third world, but the ladies assure me the fish is fresh caught and fresh cooked, and very cheap. I buy a snack size container of spicy fish and it is delicious. Another lady is selling homemade coconut macaroons. I can’t resist, but save these for later.

Diane and I, along with Kat and another friend in our party, who has flown in a day earlier from Calgary, meet up and head for a very late lunch and early cocktails at the Cozy Corner beach bar, then stagger back to Seaspray for a long nap in hammocks under the palms. In the evening we wander along the sidewalk and discover The Secret Garden, which is both a restaurant and a spa, an odd mixture. The staff seem to be Canadian and they are very friendly, like everyone in Placencia. We are introduced to a popular fish called a snook, caught locally and quite delicious. We have it grilled with veggies and feel very healthy.

Once the rest of our crew has assembled, cousins from Calgary and Toronto, we head out for a celebration dinner. There’re lots of places to eat in the village, but Rumfish y Vino is highly recommended. Diane immediately spots red and white pasta sauce on the menu, a sure sign of the Philadelphia influence, and sure enough one of the American owners is from there. The place is upstairs with a balcony to watch the passing scene below. Our first table doesn’t suit and they are obliging in moving our group of seven. Diane has more snook and veggies and I try snapper Napoleon, an interesting preparation piled up with some sort of deep red potato-like substance at the bottom. Whatever it is, it’s delicious. Rumfish imports its own wine, so I buy a case of a good white for our sea voyage. After dinner, Diane and I sit on the beach under a canopy of stars with our feet in the lukewarm water. Very romantic.

I’ll write about our sailing experiences in another story, suffice to say we had a lot of fun and survived.

After our week on the water we need a few days to get our land legs back. This time we choose the Maya Beach Hotel. Owner and chef John is an Aussie and his wife and co-owner Ellen is American. They offer us a warm welcome. Breakfast, lunch and dinner in the bistro are delicious. John has cleverly taught local cooks to prepare a few dishes very well, and the quality shows. We hardly leave the property to try anything else. Our room looks over the sea, above the restaurant, with a wide open balcony. The rest of our gang have booked in at a villa on the property and we join them for a BBQ one night and a dip in their private pool.

Kat is long gone, to another charter, and the cousins have decided to take a run up river. It sounds very buggy and as Diane is seriously affected by bug bites, we book a trip inland to the Cockscomb Basin Wildlife Preserve and Jaguar Sanctuary. We don’t expect to see a jaguar, which is typically nocturnal, but we are promised plenty of wildlife including macaws, great curossows and keel-billed toucans.

The closest we come to a sighting

We leave early and the first leg of the trip up the peninsular is brutal on the van springs, and our bums. In places the road has boulder size rocks everywhere. Near the new airport there are occasional signs of road construction, mostly large earth movers parked on the side of the road with the driver enjoying a smoke break. Not much actual work going on. Not much progress on the promised international airport. Check your listings ’cause if they ever do fly in here direct it will be a marvellous way of avoiding Miami airport. The long-term idea is to attract the European tourist. Eventually we meet up with the fully paved Southern Highway. What a relief.

Along the way we see endless orange and banana plantations. All the oranges go to concentrate, our guide tells us. Bananas grow in blue bags to protect them from bruises and insects and all ship by Fyffes to the UK. Later in Placencia, we watch a banana boat leave Big Creek deep water harbour, a big Fyffes logo painted on the funnel and I’m reminded that pre-WWII my grandfather was shipping manager for the line. He arranged for my teenage dad to travel as supercargo around the Caribbean on company ships. For a moment I’m sad that I never really knew my grandfather. He was killed by a bomb just before my second birthday.

At the Maya Centre Village we buy tickets to the park. Then we take an even worse track into the reserve. We pass a Caution Jaguar Crossing sign. It’s the closest we come to seeing one, but I take a picture and send it to our Jaguar dealer in Toronto. Not sure he appreciated the humour.

Basilio, our guide, gives us perhaps too much information on the flora and fauna and we don’t see much of anything before we break for lunch. We enjoy baked chicken, rice and peas and salad under a palapa. Then we change into swimsuits for tubing. I’ve been white water rafting before and this is nothing like it. We get our bums into large black inner tubes in the South Stann Creek in ankle deep water and drift off, sometimes scraping bottom. No piranas or crocs in these waters. It’s a magical drift in refreshing water along a lazy river through a lush rain forest. Every now and then we make a faster run down a rapids, occasionally steering around deadheads. About a mile downstream there’s a rope across the river marking the end of our trip. Truly a great gentle experience. On the way back to base we pass a pretty 30 foot waterfall, where the adventurous ones take a dip in the icy pool. Not me. Back at the van, we find Diane has been eaten by bugs. The bug spray has washed off. Apparently I’m immune. Not one bite.

We check in with the cousins. They’ve seen a few birds, a lot of bats and a couple of crocs.  The macaws, great curossows and keel-billed toucans have been marked by their absence.

Placencia was a pleasant interlude, by no means a luxury holiday, but priced right, with wonderful sailing, snorkelling and diving. For the latter reasons I’ll go back, but not for the toucans or the polyester sheets.

This article was originally published on April 21, 2013.