There’s lots to visit in my ancestral home of Lewes, East Sussex.

Lewes Castle looms so high above this historic market town, it’s hard to believe it’s constructed on an artificial mound, made of chalk blocks. It was built only three years after the Normans arrived, by William the Conqueror’s brother-in-law, also William, and 1st Earl of Surrey. The last of his line died in 1347 and is buried in Lewes Priory, another local crumbling ruin, except that one was torn down by Henry Tudor during the dissolution of the monasteries. Although the town was sacked by the French in 1377 and the castle damaged, worse destruction was to come in 1620, when parts of the fabric were removed and the stone sold off. Since 1846 the castle has been owned by the Sussex Archaeological Society which is responsible for restoration, and running the museum and tours. For a ruin, it’s in pretty good shape.

It was my father who first took me to the top of the one remaining tower, a hearty climb, with the reward of a spectacular 360 degree view of the surrounding countryside. I was at a boy’s boarding school in nearby Battle, actual site of William’s defeat of the English. It’s hard to go anywhere in Sussex without bumping into history.

All around one can look down on ancient buildings clustered in the castle’s shadow, built right up to the walls along Castle Ditch Lane. Leading away from the ditch are a number of steep narrow alleys called twittens, used in the defense of the castle, when large boulders could be rolled down on the surprised attackers. Climbing up one of these lanes from the car park, one can imagine the invaders going down like bowling pins, when the rocks came roaring down, bouncing off the cobbles and banging off the flint walls.

The Barbican is the gate house and in much better shape, with a road to houses behind running through it. The small museum has interesting highlights of the history of the area, the ubiquitous video and a room with dress up clothes for the kid in all of us.

The area draws me back again and again when I’m in England. Mostly because my 90-something-year-old mum lives there, but also to renew Sussex roots. Mum’s maiden name is Lush (not a reference to her daily medicinal Scotch) and when she signed up as a motorcycle despatch rider during the mid-century disagreement with the Germans, she was known to one and all by her last name. Lieutenant Dad came back on home leave in 1941 and they were married, but Lush stuck as a nickname. In her 10th decade, she drives a Smart car around town, and works a few days a week as a volunteer at the local Red Cross charity shop, where everyone still calls her Lush. She has a town house down by the River Ouse, which occasionally floods, the water so far stopping short of the front door, and a postage stamp garden, where there are always chores for me to do. Lush is that indomitable type of Englishwoman exemplified by Mrs. Crawley in Downton Abbey, and I’m proud to be her son. 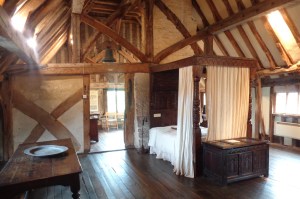 My late father’s grandparents had a farm only four miles from Lewes, in Glynde, now famous for the opera performances at the Glyndebourne Festival. We have never been able to discover the exact location of the farm, but I sometimes visit my great grandparents graves in the tiny dilapidated church in nearby Bedingham. The churchyard has seen better days and someone has been sensible enough to put a flock of sheep in there to hold back the grass and weeds. The ancestors are in a corner surrounded by an almost impenetrable thicket of nettles, so I bring gardening gloves and clippers and hack them back. The legend carved into the stone has almost disappeared, but years ago I brought two of my kids here, so the location will not be completely forgotten.

Glyndebourne is an excellent reason for a visit to the area, if you like classic opera at its finest. The Christie family opened the Festival here in 1934 and 75 years later it’s still a family enterprise. Originally only Mozart operas were presented, but since then the repertoire has expanded to include Britten, Verdi, Rossini and more. The theatre has expanded from the early 300 seat affair to a 1,200 seat opera house 20 years ago. Guests still dress up and come by train from London to Lewes, where there is a coach service to Glyndebourne. I always found it amusing to see the toffs in their tuxes in the early afternoon, hauling picnic baskets off the platform. But the performances are timed to have an extra long intermission so a repast and champagne can be enjoyed in the gardens. The curtain calls last only long enough for the crowd to catch the train back up to town.

The spare room at mum’s is tiny, with a narrow single bed, even worse than the ones at boarding school, so now we elect to stay in a B&B or a hotel when we visit. Recently Diane and I have discovered Pelham House, in a lane off the high street. It’s a gorgeous Georgian mansion with extensive gardens and a fine restaurant. In the friendly bar we’re offered a glass of local sparkling wine. Apparently the area has a similar climate and terroire to the Champagne area of France, and Breaky Bottom winery seems to have got the process down just fine.

We’ll also be back in November to celebrate bonfire night, which in Lewes is a very big deal. The bonfires and fireworks not only commemorate the traditional Guy Fawkes Night, but more importantly the Lewes Martyrs, 17 Protestants who were burned at the stake by “Bloody” Mary, Catholic daughter of Henry VIII. Over the centuries six major bonfire societies have developed to dress up, parade through town, light a huge bonfire on the Downs around the town, and set off the biggest fireworks display. Mum watches the parades from her upstairs living room, but Diane and I will be in the thick of it, to enjoy the throng of smugglers, Mongolians, Greeks, Romans, Tudor nobles, maidens, monks and more dragging burning tar barrels through the ancient streets and carrying burning crosses advising “No more Popery.” Pelham House has a very good bonfire package and we’ve had to book almost a year ahead to take advantage of it.

We support the Waterloo Bonfire Society which meets at The Lamb of Lewes, a traditional pub, though more popular with the young and noisy music loving crowd than I would like. This year, Diane and I will dress as smugglers, the original costume adopted by the once illegal Bonfire Boys to avoid being recognized by the forces of law and order. The Waterloo crowd wear wide red and white striped sweaters to distinguish them in the parades. A local lady is going to knit ours this summer.

Another of my favourite pubs is The Snowdrop Inn, over the river in Cliffe. It’s name doesn’t celebrate the tiny spring flower but a disastrous avalanche in 1836, the worst ever in English history. Cliffe, not unsurprisingly, has a huge chalk cliff, visible for miles around. An unusual accumulation of snow slid down onto the cottages nestled below and crushed the occupants. The pub had become a bit run down over the years. I recall one winter visit where the ice machine had broken. Insisting on ice for my Scotch, the bartender just went outside and broke an icicle off a drainpipe. However, two chaps from Brighton bought the place in 2009 and have brought it back to life, winning awards for pub food and beer in 2012. Tony and Dominic source all their food locally and even raise their own pigs on a local farm. Not your usual pub fare. The beer is excellent too. In addition, they host gatherings of the South Street Bonfire Society, founded in 1913. This is their 100th anniversary and we’ll be looking out for their brown and cream smuggler’s uniforms in the parades.

A further Lewes link to the Tudors is to be found at the Anne of Cleves House, a 15th century timber framed hall. The house was given to Anne by Henry VIII after their unconsummated marriage was annulled, due to her ill-favoured looks. It’s a good name to bring in the tourists but she never actually visited her property. Nevertheless, the house provides a great snapshot of life in those times. I love the kitchen with its collection of weird iron implements. In a back area is a fascinating display of cannons and cannon making equipment. The garden features a few rare trees from Elizabethan times and an espaliered quince tree. If I ever find a quince at the fruit market, I’ll make some quince jelly. 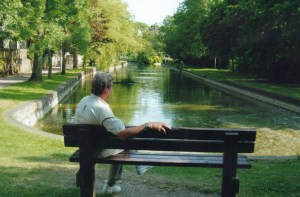 Contemplating dad by the pool

The Pells Pool, built in 1860, is the oldest freshwater lido in England. It’s been rebuilt since then, but the water still comes from a freshwater spring. There’s a gentle walk down to the river and along the banks that takes you between the lido and a decorative pond, fed by Pell Brook, where ducks and moorhens roost on little artificial islands away from predators. My dad loved to walk this way and a commemorative bench in his name has been set up at the north end. I always sit there and take a quiet moment to remember him, though his ashes were scattered thousands of miles away off the tall ship Tenacious, in the Atlantic near the Canary Islands. That’s a sailing yarn for another day.