INTO THE VALLEY OF THE LOIRE RODE WE 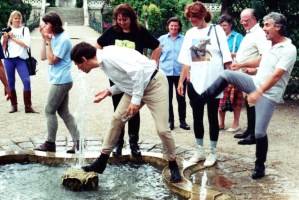 Birthdays come and go, but the really big ones every 25 years need a serious event to mark the occasion and my number 50 was no exception.

So it was I found myself on a TGV (Train à Grande Vitesse) with group of companions from our stables in Ontario, riding the rails smoothly towards our rendezvous in Tours, France. As we munched on suitably French snacks we excitedly discussed our forthcoming horseback ride down the Loire Valley. I’d been in training for weeks so I could endure up to six hours a day in the saddle. I was more than ready for anything our chef de mission could throw at us.

At the station we were met by the man himself,  Jean-Paul Bonétat, who would be our guide for the next six days. JP is still going strong with his successful tours more than 20 years later at Les Ecuries des la Vallée des Rois. He loaded us into his van for the somewhat more bumpy ride to his farm, where a glass of champagne awaited. Then we were introduced to our horses, and three English ladies who were joining our ride. Right away we tacked up, and learned about our French cavalry saddles. Fortunately, we all rode English style, but the thin leather which was all that separated our bums from the horse took some getting used to. Some of the smarter riders had brought padded sheepskin saddle enhancers. JP took us on a walk-trot-canter routine for about an hour across the fields, mostly to judge our skill level and see what sort of riders we were. He’d taken one look at me and put me on a tough former trotting horse named Kassius. Once I’d got over the horse’s love of galloping ahead, with his tongue lolling out, we became best friends. 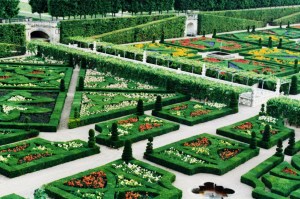 Our first stop was the wonderful Château de Villandry where we wandered through the restored ornamental Renaissance gardens. No time for the inside tour of the palace. JP assured us we’d see lots more châteaux on our ride and besides we were due back for an enticing swim in the pool and a family style dinner. The swim was interrupted by a monster thunderstorm and dinner was by candle light. The wet hung around for the next three days, the first rain they’d had in France for six weeks. Lucky us.

We were up with the sun the next morning, continental breakfasted and packing just enough clothes to fit in a saddle bag. Our suitcases with the balance of our clothes would meet us mid tour, so we could change. A saddle bag is the size of a small briefcase, so we were down to a couple of pairs of socks and underwear, a couple of clean T-shirts, a sweat shirt in case it got cold, and minimum wash gear. A rain jacket would be strapped on the back of the saddle. Clearly we were going to be a smelly bunch. 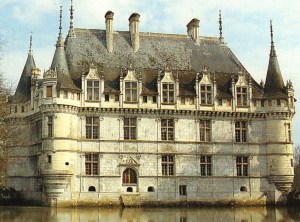 The floating chateau at Azay

We quickly settled into the daily routine, riding through the beautiful countryside along the banks of the Loire river until it was time to stop for a long continental lunch, then a tour of a château, museum or winery, another long ride in the afternoon until we reached a stables or field where we could un-tack, groom and feed the horses, then dinner, lots more wine and exhausted to bed. We rode across vineyards and drank the wine they produced (in substantial quantities). We cantered along royal rides among the majestic trees of state forests. We clip clopped through pretty little villages, geraniums popping their red heads out of every window box. We picnicked beside fields full of glorious golden sunflowers. We ate and drank in a coaching inn hundreds of years old. We climbed over sleeping cyclists in dormitory-style accommodation. In spite of eating and drinking like starving cavalry soldiers, we all lost weight.

Day 2 we rode to Azay-le-Rideau, a picturesque château built 450 years ago on an island in the river. The morning was marred by rain showers, so we were more than a little damp when we toured the place. I enjoyed JP’s story of where the aristos of yesteryear went to the bathroom in a building with not a single loo. Yes, behind the tapestries, which are still conveniently hung three feet away from the wall. No odiferous surprises back there now, thank goodness. 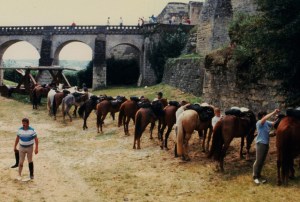 Caught changing in public in the moat at Chinon

Day 3 we get to Château de Chinon, a spectacular edifice where Joan of Arc met the Dauphin before setting off to teach the English a lesson. Once again we were drenched by a shower just before we hitched the horses up in the huge dry moat. Thinking I was unobserved, I changed out of my sopping wet riding britches, only to find a whole gallery of Japanese tourists taking my picture from the battlements above. Caught in my undershorts again. The castle is built on a rocky promontory above the river and is an extraordinary place, filled with history. 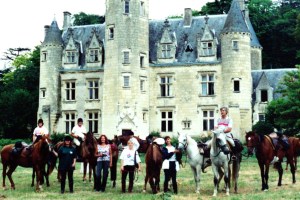 We ride on to Château de Coulaine, a private château and winery, which has extensive stables and where we will spend the night. We dine with the owner and his family, who have lived there since 1300. Some of Etienne de Bonaventure’s ancestors headed for Canada where they have a plaza in Montreal named after them. I chat in my broken French with Mme B the senior, who tells me about having to take in boarders to keep the historic listed château in good order. On the wall is an original Bruegel, which they are not allowed to sell by the authorities. If they could, they could fix up the whole place with the proceeds. The wine is fine and Kassius enjoys a night in a substantial stone stable. 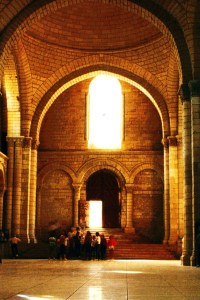 Day 4, after a mad gallop down twisting forest paths, we ride into Abbaye Royale de Fontevraud, site of a double abbey, once populated unusually by both nuns and monks. A well-locked door kept them to their own quarters. At the time of Napoleon it became a prison, and that’s probably when the body of English King Richard the Lionheart got lost. Only his tomb remains, a reminder that this area was once part of the English dominion. When we found our tour group’s pension was overbooked, my roomie and I took pity of the ladies who were looking forward to a shower and volunteered to stay elsewhere. After a ride with our saddle bags around the perimeter of the Abbey in a cramped Citroen Deux Cheveaux and with very low expectations for the night, we pulled up at a luxurious five-star hotel. Hostelleire du Prieure St Lazare is a former leper hospital, but completely modernized. Walking through the marbled lobby in our dirty riding britches and boots, we felt like the guys in the Amex commercial. I pulled out my card for incidentals and presented it to the snooty clerk sitting behind an exquisite Louis XV desk, and all was well. Heaven. There was a mini-bar, a real shower and even TV. We were given instructions for the short cut through the churchyard, changed and joined the others for dinner. Returning, much later, I realized I’d left my camera in the restaurant, so headed back for it.

Finding my way back through the short cut alone proved much more challenging. For one, all the lights had been turned out and with no moon, the  night was pitch black. A strange howling noise was coming from somewhere close by, but I knew it wasn’t the ghosts of the hundreds buried there. No, I don’t believe in ghosts. But when something brushed against my leg, I confess to jumping out of my skin. It was just the churchyard black cat, glad to have company. More prosaically, I discovered the ghostly howling was the cleaners power washing the public toilets. 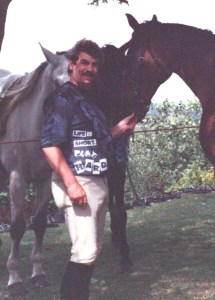 Nigel living up to his motto at Saumur

Day 5 and we are at Saumur, home of a fabulous horse museum and the National Equitation School. The former had amazing relics of the days of armour, but sadly the school was closed, so we miss the displays of horsemanship for which it is famous. After a champagne lunch, we cross the river on a very long bridge, with trucks thundering by. The horses have done this before, so they are unmoved, but we were all a bit nervous. From our seat in the saddle, there’s a straight drop over the railing into the Loire about 50 feet below. Not survivable for rider or horse. I’m given a tree branch and ride at the back, slowing down the traffic by threatening to whack them on the bonnet if they come to close. Seems to work. We make it across and turn back east for the home-bound leg of our randonnée. 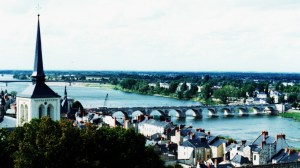 A bridge to cross over the Loire

Day 6 we have been sleeping in a farmhouse and are woken by crowing cocks. Shortly after setting out we pass a vineyard and are invited in to try their wine. We enjoy a bottle of St. Nicholas de Bourgueil, a cab franc typical of the area and when we praise that, they produce a bottle of Champagne. This is all before 9 am, but we’re getting used to it. In the evening we visit some historic wine caves, where wine has been stored and racked in the constant temperature below ground since Roman times, but by then I was too mellow to really take it all in. 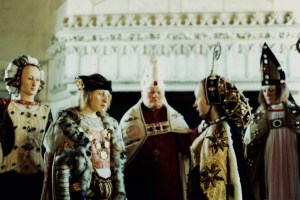 We knew our last day on the road was going to be a long one. We stop for lunch at a farmhouse with a watermill where a long table is groaning with food. Afterwards, I sit on a chair beside the mill pond and am impaled on a rusty fish hook. Everyone laughs as I jump up, but removing it requires the application of brandy both internally and externally. One of the English ladies volunteers to do the torture with a pair of pliers. I think she had been a nurse, and all I can say is I endured it. I sit on my fleecy for the rest of the ride. We ride into the town of Langeais for our last château visit. It’s interesting but we’re too bagged to care. In one of the many rooms, we marvel at a tableau showing the marriage of the young King Charles VIII to the Duchess Anne of Brittany, uniting their two kingdoms and helping establish the boundaries of modern France. They’re tiny people, or it’s a two-thirds scale model. I’m not sure. Slightly rested we ride on.

We get back to JP’s stables after 8 pm, very tired but elated at our accomplishment. It’s hard to be exact, since we were off-road so much, but we probably rode almost 150 kilometres. We have long showers, change into our last clean clothes, and enjoy a celebration dinner, with wine, outstanding filet mignon, songs accompanied by JP on the guitar and silly speeches of thanks to our host for such a chevauchée fantastique. Tomorrow, it’s back to Paris and home.

I was thinking about this amazing trip this summer as a minor birthday looms and then wondering what I’ll be doing for my next big landmark at 75.