Life in a small village in England has its own charms.

We have been staying in the small village of Thorpe Salvin in South Yorkshire. I’m relieved to learn we are actually in Yorkshire, since our postal address indicates Nottinghamshire. At Shireoaks, a couple of miles away, the borders of those two counties meet with Derbyshire, so as we drive along narrow country lanes which twist and turn hither and thither, we could easily be in any one of the three. I’m relieved because folks around here speak with a distinct voice that I had always identified as a Yorkshire accent. I doubt I would be able to identify a Derby or a Nottingham accent.

Derbyshire has much to recommend it. The spectacular Peak District National Park, splendid stately homes like Chatsworth, home to the Dukes of Devonshire, and pretty towns like Bakewell. Nottinghamshire, of course, has Sherwood Forest and Robin Hood. But Yorkshire has so much more and even in this tiny portion of the county on its far southern edge, the rolling hills and poppy-filled fields evoke other memories. Diane’s childhood was spent here and she speaks of Yorkshire like a true native daughter, though her accent has long disappeared. Coming back to stay in her mother’s little retirement bungalow is like coming home. 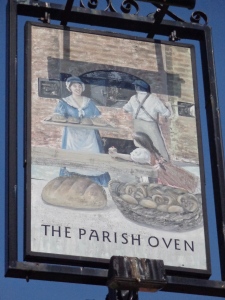 We have been to the Parish Oven, the friendly village pub, for the monthly gathering of the lunch club. We meet neighbours who remember her father, gone for 25 years, and tell us all the latest gossip. Carol, the publican, who always welcomes us warmly on our flying frequent visits, says this is the only village group who regularly come to the pub. With pubs closing all over England, a way of life is passing, and she is right to be worried. But today the dining room is full and the bar is packed. In one corner nine vicars are having lunch at a long table, an extraordinary sighting in itself, but even more fascinating is the fact that eight of them are ordained women.  I presume they’ve come from the 12th century parish church, emblazoned with Norman carvings, and noted for its unusual Saxon doorway.

Our group of a dozen or so ploughs its way through steak pie with mushy peas, fish and chips, roast beef and Yorkshire pudding, and other pub delights, all really excellent. Who needs wine bars when the delights of country food are so readily available?  But the locals should give their hostelry better support, for if they don’t use it, they may lose it. 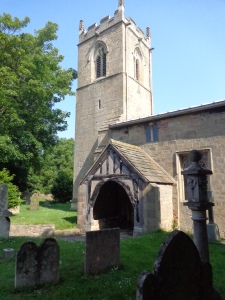 Earlier in the day we had a trio of workmen at the house, which has been neglected for some time. The builder has come and gone and the new windows no longer let in drafts, or sag in their frames. Paint glistens on the exterior, the sagging chimney has been rebuilt. The gardener has mown the grass and trimmed the hedges. Diane has bought white and green perennials at the garden centre and the flower beds are populated with decent flowers, not orphaned poppies and marigolds seeded by the wind.

Our busy morning starts with the man who has come to change the electricity meter, which is a 1969 model and out of date. He has a strong accent, but I believe he tells me that the polarity is reversed on the wires in the breaker panel. He cuts the power. While he has his bum sticking out of the hall closet, the plumber arrives and squeezes in. He’s here to fix a leaking tap and a blocked drain. He cuts the water. No sooner has the meter man left than the chimney sweep arrives. He’s a very careful worker, but there’s a distinctive smell of soot in the house as he works. Probably hasn’t been cleaned in 10 years, he offers. As I sign the bill, he gifts me the pen, which announces that he’s a member of the Guild of Master Sweeps. Power and water back on, and soot swept up, we can shower and head out.

Library in a phone booth

Thorpe Salvin is a pretty village and the Thorpe in Bloom garden club has put decorative tubs of flowers on the grass verges down all the lanes. Ours is missing and, suspiciously, our neighbour has two tubs, but in the spirit of village harmony, we say nothing. In the fields which march right up to our back hedge and surround the village, wild poppies proliferate. In the middle of the village a large wheel barrow has been planted with a profusion of flowers. For several years this was voted the prettiest village in England, until the organizers asked the village to retire from competition and let other spots have a chance. Next to the barrow a solitary red telephone booth stands on guard, long disused, but freshly painted and repurposed as a lending library. Bring a book and take a book. A splendid idea now that the travelling library van no longer visits, victim of council cutbacks.

A large for sale sign stands outside Thorpe Hall, a grand Georgian residence which sits on top of a hill looking down over the village. We do not know the squire, or why he is leaving, but we hear a lovely tale of a Christmas long ago. My lunch club neighbour tells me of her first Christmas in the village when a carolling group make the long trek up the drive in a grey drizzle. Instead of having to perform outside, they are welcomed inside to partake in seasonal treats and wine. Lots of wine, she says. After warming up and drying out by a roaring fire, they sing carols around the decorated tree, and then feeling they have outstayed their welcome, they head to the door. To their surprise the drizzle has turned to snow and the grounds are covered with a pristine white blanket. Black tree branches are outlined with crystal, the bushes look like snowmen, not a footprint mars the driveway. It was a magical moment in village life. 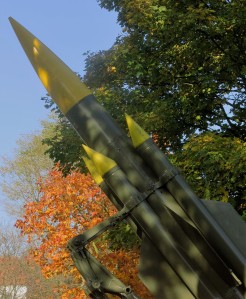 Serious SAM missiles in the village of Woodsetts

Across the little valley are the ruins of the original Thorpe Hall, built in 1570, on the site of an even older manor house. In 1636, the hall was bought by new owners, who were eventually rewarded with a Dukedom and moved to grander quarters. The hall was simply abandoned and then partially demolished in the 1820s. Only the windowless, roofless south front still stands, somewhat dangerous and closed to all. We pass it every time we drive into the village from Harthill in the west and long to explore.

When we drive into the village from the east, we cross over the Chesterfield Canal, now restored and where we can hire a canal barge by the hour for group outings. Just before we come to the house we pass a grassy airfield, home to the Sheffield Aero Club. The small planes that occasionally buzz the house are no bother.

Just to the north, we visit the area where Diane grew up. Driving down a lane, we come to a high brick wall and imposing gates marking a grand estate. Looming over the wall, stands a huge array of surface to air missiles in a launcher. We don’t know if the owner has raging paranoia or if it’s just an odd souvenir, but I think every village should have one.

This article was originally posted on July 6, 2013. 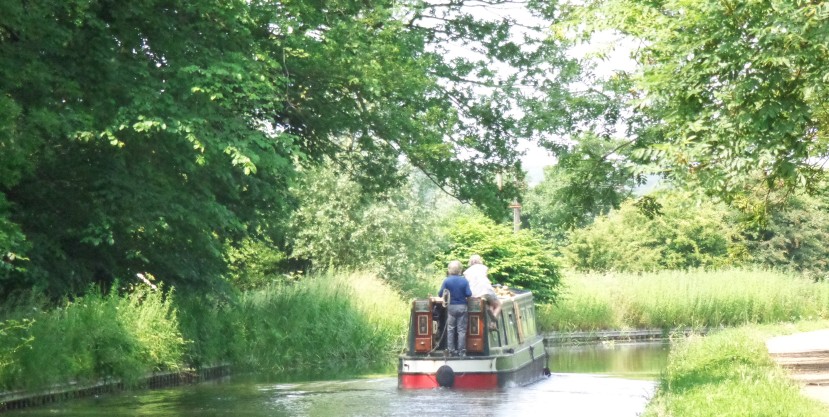 Featured image – A narrow boat on the restored Chesterfield Canal