At barely seven feet wide, it’s quite a trick to get a six foot eight inch narrow boat through the canal lock, leaving only two inches clearance on each side. It’s the other end of the scale to the giant Panama Canal locks.

There are 2,200 miles of navigable canals in England and Wales, and a few in Scotland. The English and Welsh canals are mostly interconnected, but the Scots, as is their way, have kept themselves separated. This is the story of 46 miles of that network.

We first became aware of the local Chesterfield Canal when Carol in The Parish Oven pub pointed out the retired lock keeper at the end of the bar. There’s a canal here? I ask. Oh, yes, she says. You can walk down to it at the end of the lane. So off we go one sunny spring morning, until at the end of a long lane we come to this piece of water: well charitably I would call it a ditch. Not much impressed, we trudge back to our cottage in the village.

Ready for the lock

The next day, newly aware, Diane points out the canal running alongside the road into another local village; slightly larger than our village, it has shops. And sure enough, round a corner comes a narrow boat, in this case very narrow. There’s traffic so I can’t stop to take a photo, and in a moment it’s gone. Little by little we become more aware of the canal, being lovingly restored by a bunch of volunteers. 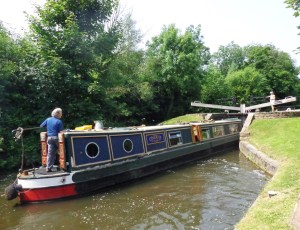 About three-quarters of the two century old canal runs from the River Trent, but it stops short, near the Kiveton Park railway station. Here the canal was damaged by mining subsidence and filled in. At the Chesterfield end, a new marina has been built and the canal runs for about eight miles up to Stavely Hall, a stately home, where the canal was filled in and partly covered with development. In 2003, the Worksop to Norwood Tunnel stretch of the canal was reopened, with 30 restored locks, one new lock and three new bridges. The stretch from the tunnel to Stavely will be the toughest to restore, and the canal may be rerouted, with new locks being added if the tunnel cannot be repaired. 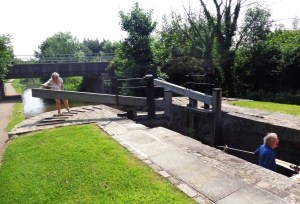 People say, though I have to take their word for it, that the Chesterfield Canal is one of the most beautiful waterways in England. It runs through green fields, lush forests and verdant farmland, with a couple of towns on the way. There’s no sign of the former collieries and industry it once supported. We spot little bits of the canal when we go shopping in Worksop, or to catch the London train in Retford, but mostly it meanders through lovely English countryside. For hikers, ramblers and strollers — like Diane and I — the towpath can be walked the entire route, although I have not checked out this assertion myself. I’ll take the guide book’s word for it. Almost until the end of the canal’s industrial life, horses were used to tow the boats. Now, small engines do the work. The speed limit is four miles an hour.

The lock starts to fill

Near our village of Thorpe Salvin there’s an impressive series of locks which lift the canal boats up the hill.  On a recent hot summer’s morning, I’m taking garbage to the local dump when I spot a narrow boat coming up the canal. I park at the side of the road and wait at the lock to speak to the skipper and crew. The skipper drives the boat fearlessly into the narrow entrance to the dock, while his lady crew darts off and unlocks the sluice. Then she takes a winch handle they have carried with them and releases the water in the lock until the lock and the canal are level. With a great deal of effort she pushes the first lock gate open and the skipper uses the nose of the boat to edge the other one open. Interesting technique, which accounts for the dents and dings on the front of the barge. I wouldn’t like to try that with my plastic boat. The locks are so tight to the boat that there’s no room for fenders.

This boat is even skinnier than a traditional narrow boat, as the barges on the Chesterfield Canal developed independently from other systems. They were as wide as they needed to be for the work at hand. There was usually only a crew of two, who slept ashore in their own homes. These boats do not come with the colourful decorations associated with those on other wider canals, where barge dwellers had time for fanciful works of art.

While the lock fills with water to lift the barge up to the next level, I ask the skipper if his good lady always handles the locks. She doesn’t like to steer, he replies. However, when I chat with her she’s more than happy to let me help with opening the other end of the lock. My word, it’s hard work. By the time I have one gate open, I’m exhausted. I’ve been pushing on the long lock arm from an almost horizontal position, toes dug into the rough bricks usefully positioned in the arc of the swing. The skipper barges the other gate open and I tell the lady crew to hop on and that I’ll close the lock after them. Once they’ve gone through, it’s slightly easier to close the gates, the water levels now being even and the current helping me rather than fighting me.

Only three locks to go

Their destination is the Shireoak Marina, with only three more locks to go. To get to the top and final stretch of the canal there are 20 or more locks. Some of these are double and treble staircase locks. One of these stairs, though I don’t know which, is among the earliest ever built in England, over 240 years ago.

The canal was once used to haul away coal from the extensive local mines, and good Yorkshire limestone from the quarry in South Anston, returning with corn and timber for Derbyshire. The quarry supplied the stone for the Houses of Parliament in London.

The Chesterfield Canal Trust has three narrow boats available for charter. Details are on the links. The John Varley operates on the Chesterfield end of the restored waterway, running the five miles between Tapton Lock and Stavely. The Seth Ellis is based in Retford and can be taken upstream to the head of navigation at Kiveton, or downstream towards West Stockwith and the junction with the River Trent. The newest boat, the Hugh Henshall, is based near us at Kiveton. It’s named after a famous canal builder.

We missed the Thorpe Salvin Lunch Club charter just before our last visit, but on our next visit to UK we’ll get more organized and sign up for one of their tours. I look forward to visiting some of the old pubs along the canal: two are called the Lock Keeper, then there’s the Canal Tavern, the Rum Runner, the Boat Inn and the Waterfront Inn. All aptly named. I think we’ll enjoy a beverage in many of them soon.

And please read my new contributor David Moorcroft’s amazing story of a passage through the somewhat larger Panama Canal in The Path Between the Seas.