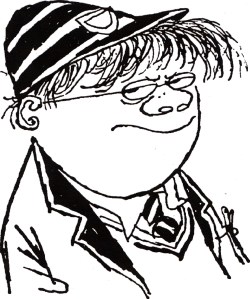 Living with one’s name can be a burden, but let’s not obsess about it. Or shall we?

‘Name of Shame: The Importance of Not Being Nigel,’ reads the headline in a recent edition of The Spectator, the 185-year-old British weekly magazine of politics and culture for the right. In it the writer, also named Nigel, posits that Nigel Farage, the leader of the very far right UKIP party, will never be taken seriously because of his name. What cheek! Personally, I’ve always felt kind of special, with a distinctively English name, not given to every Harry, Oliver or Jack — to name the top three UK boys’ names for the past four years.

My first inkling that there was another Nigel on the planet came at a small boys’ boarding school in Sussex, England, when my best friend laughed out loud during reading hour. Ronald Searle, my favourite cartoonist, had illustrated a very funny book called ‘Down with Skool!’ allegedly written by an heroic chap named Nigel Molesworth, “As any fule kno.”

My classmates teased me about my resemblances to the anti-hero (there were none, I swear) but I was secretly proud to have been discovered. The name Nigel had not been popular when I was Christened. My father was absent, being a POW in Burma, and my mother’s first choices of Torquil and Rupert were soundly rejected by my wonderful Godparents. I imagine they caved into her third suggestion. It’s possible she was influenced in her final choice by my illustrious distant relative Nigel Napier, who became the 14th Lord Napier, and hereditary chief of Clan Napier, in 1954 and died in 2012. It was the only given name I had. I suppose the fact that I had two last names meant I didn’t need a middle name. Anyway, the name gained in popularity throughout the 50s and 60s, but pretty well died out by the 80s. It was never popular in the U.S. or Australia. Indeed, in the land of Oz, being a Nigel is a euphemism for someone with no friends.

Apart from Nigel Molesworth, my early literary icons were Sir Walter Scott’s Nigel (published in 1822, a book I have not actually read, merely heard about, but who hasn’t admired the heroism of his Rob Roy or Ivanhoe?) and Sir Arthur Conan Doyle’s Sir Nigel (published in 1905 and yes, I did read it, though it wasn’t nearly as good as his Sherlock Holmes stories). 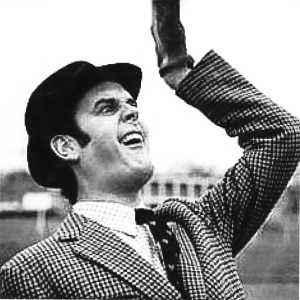 The name was originally thought to come from Roman times, and the Latin word ‘nigellus’ meaning black, but this turns out to be a false lead and the name is more likely an Old Norman name from the Norse root Njáll. This is quite appropriate as my mum’s ancestors were Norsemen,  later called Normans, who settled in Wiltshire, near the Somerset and Dorset borders, so long ago they were mentioned in William the Conqueror’s Doomsday Book.

I didn’t think much about my name throughout my early adult years. Certainly there were some laughs when the Monty Python gang named their Twit of the Year Nigel Incubator-Jones, played by John Cleese in the original Flying Circus television sketch and by Terry Jones in the 1971 film, And Now For Something Completely Different. Locally, there was a small role for a Brit butler in a long forgotten CBC 70s kids’ television show. He was named Nigel Napier-Napier, after whom, I shall never guess.

In the 80s there were more laughs when Rob Reiner’s mockumentary about the fictional heavy metal band Spinal Tap came out. Lead guitarist Nigel Tufnell, played with an atrocious fake English accent by American actor Christopher Guest, has the famous amplifier which goes one setting beyond 10, to 11. 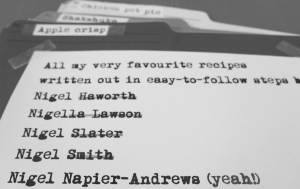 There’ve been two Nigel actors playing Sherlock Holmes’ sidekick Dr. Watson. First, Nigel Bruce, in Basil Rathbone’s 40s film series and then Nigel Stock, in the 60s BBC television series. Nigel Havers, among many roles, was in Chariots of Fire, and more recently Coronation Street. Nigel Hawthorne was brilliant as Sir Basil Humphrey in Yes Minister, and the king in The Madness of King George. In the music world, the best known is probably violinist Nigel Kennedy, but in their own circles Nigel John Taylor, bass player with Duran Duran and Nigel Olsson, drummer for Elton John carry some weight.

In the food world there are a number of extant Nigels, including the popular ‘cook who writes,’ Nigel Slater, whose Kitchen Diaries I read and admire. I’m trying to emulate his success by being ‘a writer who cooks.’ Chefs Nigel Haworth and Nigel Smith have their following in the UK as does the almost Nigel, tv chef and author Nigella Lawson. 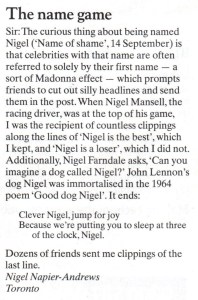 In politics there’ve been a few Nigels, most notably Nigel Lawson, Margaret Thatcher’s Chancellor of the Exchequer, the father of Nigella and a former editor of The Spectator.

Now along comes author and journalist Nigel Farndale, writing this column in The Speccie, disparaging the name Nigel. It’s a comedy name, he says, quoting the Monty Python and Spinal Tap examples above and goes on to ask how Nigel Farage expects to be taken seriously with a name like Nigel. “Another good test of the ridiculousness of a name is to see if it works on a dog. Can you imagine a dog called Nigel?” he asks. “Of course not.” John Lennon’s dog Nigel must be spinning in his grave.

Absolutely quivering with outrage at this point, I write a letter to The Editor of the august publication.

Now I’ve not had much success as a letter writer of late. When I was a National Post reader, my name would often find its way onto their letters pages. They seemed to like my sense of the ridiculous. But since I’ve switched to the venerable Globe and Mail, I’ve not managed to hit the same stride. Perhaps they have no sense of humour? Zero letters published. Anyway, imagine my pleasure this week to discover my epistle tucked away at the end of The Spectator letters column. Who needs the Mop and Pail when I’m in The Speccie?

This article was originally published on October 17, 2013.