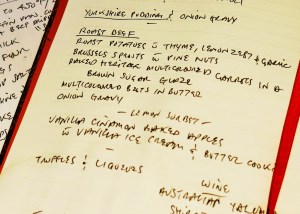 DIARY: The perils of finding building contractors in England.

The maple tree outside our Toronto town house has turned a spectacular red. It has snowed early in Calgary, even before the leaves have fallen from the trees. Hurricane winds are bashing Europe, but have departed England, where we are visiting our little cottage in Yorkshire. All is well in the village we learn, when we trot along to The Parish Oven where an Extraordinary Meeting of the Thorpe Salvin Luncheon Club has been arranged in our honour. We enjoy a bite, a beverage and gossip with old friends and new.

Since our last visit, Simon, the amiable building contractor, has been busy doing some much needed interior renovations. ‘Oh yes, rising damp,’ he said wisely, looking at the dark patches in the built-in cupboard. ‘Wardrobe should never have been built on north wall,’ he further advises, leaving out all the definitive articles in local style. So we’re enjoying our new bedroom, much enlarged but wardrobe-less. He’s also been fixing up the outside.

Last year Simon and his lads replaced the windows, fixed cracked stucco, painted the exterior and re-pointed the chimney. He did such a good job, we engaged him again to do the bedrooms while we were absent. He’s the third-time-lucky builder for us. The first contractor came highly recommended and bustled over to do a quote, but then never could get around to doing the work. ‘I’m struggling,’ he told Diane, meaning, I think, that he was too busy to bother with our little job. On to builder number two, whom Diane met in a pub and seemed a reasonable sort of fellow. He came and gave us a very reasonable quote, but then we found out he’d only take cash. Hmmm. Finally we stumble across Simon. Chatting to Ben at the garage, and explaining our builder problem while he tunes the mighty Corsa, he gives us the name of a local chap in the nearby village of Harthill, and Simon works out just fine. 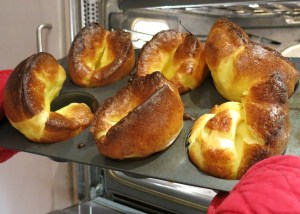 Yorkshire pudding, hot from the oven

Back at the pub, it’s Quiz Night, so we join our friend Stephen’s team and help them to another stunning defeat. No matter, the following week in our absence they come first. Still jet lagged, I’m in need of comfort food and order braised steak and Yorkshire pudding. The braised steak is really just like roast beef and comes with lashings of dark brown gravy, mushy peas and the mandatory pud. This is the first taste of really well made Yorkshire pud I’ve had for a while, so on this trip to England I vow to try it whenever I see it on the menu. I do and put on a few pounds, but it’s worth it.

In spite of all my research, I can’t find the definitive answer to the creation of this classic dish. The best version has it named as Yorkshire Pudding no earlier than 1747, mentioned in a cookery book called The Art of Cookery Made Plain and Easy, by one Hannah Glasse. Her recipe was based on a much earlier kitchen staple, known as dripping pudding after the juices of the roast which dripped into the roasting pan. In Yorkshire, the pudding was often served, with thick gravy, as a savoury dish before the meat course. Allegedly, in the neighbouring red rose county of Lancashire, pud has been eaten as a dessert with syrup. The War of the Roses lives on. The rest of England has it with the meat and veggies. 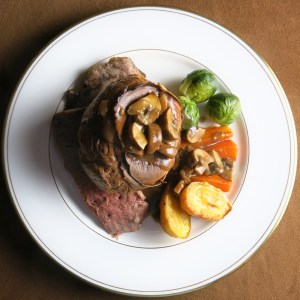 However, the most likely explanation has nothing to do with the county of Yorkshire, and will infuriate all its white rose sons and daughters (such as Diane). In early English cookery parlance, ‘york’ is just a word used to describe a batter rising. Let the debate continue as we chow down on this delicious, light and fluffy accompaniment to the traditional Sunday roast, encouraged by one politician who has campaigned for Yorkshire pudding to be given the same protected status as Melton Mowbray pork pies, Roquefort cheese and Champagne. ‘The people of Yorkshire are rightly fiercely proud of the Yorkshire pudding,’ says MP Anne McIntosh, it is something which has been cherished and perfected for centuries in Yorkshire. So far as I know, the Eurocrats in Brussels aren’t yet listening.

Enough of the debate, the trick to a really good rising Yorkshire pudding is simple – equal measures of milk, flour and eggs made into a batter, left to sit for a while at room temperature and then cooked in a really hot oven. The marvellous convenience of this dish is that it happily goes into the oven as the roast comes out to rest awhile before carving.

Here’re my recipes for traditional roast beef and a foolproof Yorkshire pudding.