Sometimes I chuckle, sometimes I laugh out loud and sometimes I have a look of studied concentration when I’m catching up with news and opinion from across the pond.

I’m reading my very favourite weekly magazine: The Spectator; and especially the back section with their five Life columnists. There’s High Life, written by Taki; Low Life, by Jeremy Clarke; Real Life by Melissa Kite; Wild Life, by Aidan Hartley; and Long Life by Alexander Chancellor. Week after week they contribute witty, erudite and insightful stories on the fascinating and somewhat different lives they lead.

Take Taki, for example, a 75-something multi-millionaire Greek paleo-conservative journo and socialite, who lives in New York,  Switzerland and London, has the inside track on all the right people and places, and literally says anything he wants. Jeremy Clarke is a mystery, except for his hilarious observations about life in his drunken pub world. He recently suffered mightily from dysentery on a  safari to East Africa and even made that sound funny. Melissa Kite is an author and journalist who often writes from the country person’s point of view and life with her builder boyfriend, who is currently not speaking to her. Politicians scuttle away when she starts ranting about the desecration of the English countryside, especially by the proposed new High Speed train. Aidan Hartley is a Kenya-born foreign correspondent, who has recently returned to his family’s farm to live among the poachers and terrorists in the former White Highlands bordering the Rift Valley. In the midst of fighting off men with guns and castrating bulls, he always makes life seem better. Alexander Chancellor, 73, is a distinguished columnist and former Spectator editor who went to Eton (Berkshire) and Cambridge (Cambridgeshire), and now lives in Northamptonshire.

Every Sunday afternoon we take a brisk walk down to the international newspaper shop, pick up the just-arrived copy of the ‘Speccie,’ plonk ourselves down in one of a number of excellent local coffee shops and catch up on what’s happening in dear old Blighty. Canada is seldom mentioned and Toronto not at all, at least until recently when the buffoonish mayor of our city and his latest stupid remarks made the diary section. Not exactly how we would wish the fourth largest city in North America (Mexico City is the largest) to be recognized by the chattering classes.

I’m thinking of offering them a column on life in Canada to redress the issue. I would call it Dominion Life. 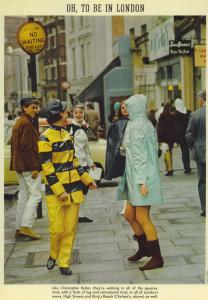 When I arrived in the Dominion of Canada almost exactly 47 years ago, it was a dull old place. Fresh from a youthful appearance in the Swinging London section of Time Magazine, I was appalled by the fact that bars were closed on Sundays, curtains were drawn in the windows of the Eaton’s department store and liquor had to be bought by presenting a ticket to a dour faced man behind a barred wicket at a provincial government monopoly store. There were still Ladies and Escorts entrances in what jokingly served as pubs,  and a generally grey tone to life. Then there were the winters to contend with. My first summer in Canada, it snowed (briefly I admit) at Niagara Falls in June.

But as England sank into the mire of the early ’70s, with the coal-miners’ strike, an energy crisis, IRA bombs in London, and more, quiet Canada began to look very good. The transition through the decades in the Dominion went unremarked by the ‘Speccie.’

When we walk back home along fashionable Bloor Street, where all the world’s top brands are now glitteringly represented, and then into the peaceful tree-lined streets of the Annex, it’s obvious how our city is under threat from rapacious developers and useless city planners.  At the intersection of Yonge and Bloor Streets, where a venerable men’s store is the last low-rise hold out, a 65-story monster is finally rising from the hole in the ground that has sat empty for a few years. Somehow, it only seems slightly better than the 91-storey building proposed by the Kazakhstan-based former developer, who fell afoul of the financial crisis. On the opposite corners are two ugly concrete monsters from the brutalist design period that would not themselves look out of place in the former Soviet republic. 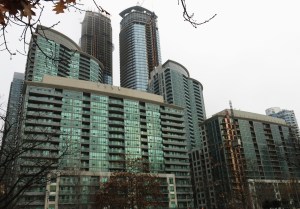 During the summer, guests we took over to Toronto Island where lies our delightful boating escape from overheated sidewalks, were simply astounded by the number of cranes looming over the city. It would not be unusual for a guest to count 20 or more active cranes. And what are they building so fervently? Why condos, condos and more condos. One report has it that there are more condos being built in Toronto this year, than in New York (second largest city), Los Angeles (third largest) and Chicago (now fifth largest) added together. On a trip to Chicago last week, my better half counted one crane. I rest my case.

These Toronto condos are not really evidence of a housing boom in the downtown, although people are certainly moving into the towering new hamlets, but more a symptom of a foreign investment boom. Large chunks of these condos have been presold to investors from China, Arabia and Russia even before there’s a hole in the ground. Regular folk seldom get the prime spots. They also complain about quickly built, shoddy construction and that old favourite, developers not delivering on their promises. The worst horror visited on us by flawed materials was the rain of glass that descended from faulty balconies onto the unprotected streets below. Two years later, it’s still raining crystal shards. A radio report today has a luxury downtown hotel shedding its skin on the sidewalks. For all its much hyped luxury, the condos above the hotel are largely unsold. Even for foreign investors, there’s such a thing as too much. 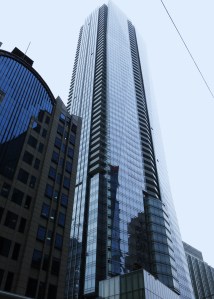 It’s not all bad. The downside of Toronto’s two seasons – winter and road construction – is that it’s hard to get about for all the endless digging. The upside is that the roads are finally getting fixed. The new subway may or may not materialize, but the cross-town street car lines seem to work well, bringing more commuters into town. One of the benefits of living near the core is that our house has what’s called a good ‘walkability index.’ It’s the new way real estate agents use to promote properties within walking distance of facilities, something which most suburbs lack.

Toronto is the largest, and by some standards the most vibrant city in the Dominion. It’s also the second most reputable city in the world, according to the Reputation Institute, one behind Sydney, Australia. In case you were wondering why a good reputation is important, it attracts tourists, trade and talent. Stockholm, Vienna, Venice, Edinburgh, Zurich, Florence, London, and Copenhagen round out the top 10.

According to Intelligence Unit of The Economist, Toronto is also the third most livable city in the world.

None of these criteria really explain why people want to come here, to live, work or play. On my own list of reasons the first would be that it is a safe city. Apart from its crack head mayor, most of the town is relatively druggie free. There are a few places one might not go, but then one wouldn’t want to go into those benighted neighbourhoods anyway. I don’t know anyone who has been murdered, mugged or burgled, or even had their car broken into. In most of the downtown area, visitors and residents alike can wander where they please with no risk of mayhem.

The great actor and humorist Peter Ustinov once joked that Toronto was like New York, only organized by the Swiss. It has the tall-building, big-city vibe, but without the litter blowing down the streets. All film makers have to do to turn Toronto into New York, when they come here for a shoot, is add fake steam vents and a few bags of imported garbage.

Unfortunately, along with safe and clean, comes a reputation as a dull place. Those of us who live here don’t see it as a dull place, but others could be forgiven for having that view. I suppose with Taki writing  about the excitement in New York, there’s no place for a Spectator column about its seemingly dull neighbour to the North after all.

This article was originally published on December 3, 2013.