Nigel and the Angels get refreshed

DIARY: Exploring the delights of Saint-Martin/Sint Maarten with a side of St. Barths.

The beach lounging chair with two drinks included rents for $10 a day and seems a very good bargain. Stretched out in the hot sun on a stretch of glorious golden sand, after an hour I beg for a beach umbrella. At the same time as the next round of rum punches arrive, a lithe young Quebec woman offers a beach massage. Not what I’m looking for, but she has a little sign which advertises her skills and includes reflexology. I don’t believe a word of reflexology practitioners’ claims, but you get a hell of a foot massage.

We’re on Orient Beach in Saint-Martin on the French northern half of the island, perhaps the most famous of the 37 beaches, and certainly one of the longest and most popular. At the southern end, there is a nudist beach, where I have never ventured, dreading the sight of folks my own age exposing their sagging leathery skin to the sun. In fact, apart from an elderly couple with remarkably fit bodies, but wearing ridiculous matching thongs, most of the topless people parading down from the full-Monty end are nubile young ladies. After a while, the sight becomes commonplace.

Later, we cool off in the sea and, after changing, head to the other side of the island for evening cocktails, to catch the setting sun in Grand Case. Here there are 55 restaurants on both sides of the main street, and all the ones on the sea side face west, where we watch for the mysterious green flash. Whenever we arrive after dark, we give the east side a try. You can’t get a bad meal in this gourmet spot. During many visits, I’ve eaten in at least a dozen of them, from formal restaurants with table linens and immaculate service, to a little hole in the wall BBQ place, down a sandy path between two other dining spots, where we sat barefoot at picnic tables on the beach and were served everything on unbreakable plastic ware.

Three Canadian women on day one in the sun

A week in a rented villa, courtesy of a very good friend, seems like a wonderful way to escape the icy grasp of winter, still hanging on at Easter.  Villa Sunrise, with three bedrooms, a huge shady patio and a plunge pool is in Dawn Beach on the Dutch side, but overlooking Oyster Pond. It’s high up the hill to catch the breeze. The beach is small and secluded and there are several good restaurants. The Westin Hotel and Casino has changed the atmosphere somewhat, but we just ignore it and pass by. As with much of the island, the road is dreadful. 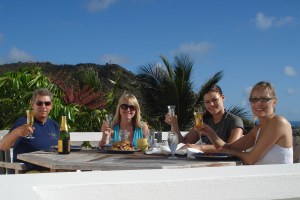 My companions on this trip are three young women, my younger daughter and two of her girlfriends. Even though I snag the master bedroom, I’m alone because my new love (soon to become the next Mrs.) cannot get away at short notice. As a consequence, I’m happy to enjoy early dinners, then a good book and a gentleman’s portion of Scotch, while the three angels head out until the very small hours nightclubbing.  We meet each morning for a very late breakfast on the villa’s balcony and then hit a different beach for the day. What a splendid routine.

Without doubt, my favourite holiday island in the Caribbean is this curiosity split almost equally between its French and Dutch owners – Saint-Martin/Sint Maarten. The French side is known for its aforementioned nude beaches and the cuisine in its plentiful restaurants. The Dutch side has the airport and the casinos. The capital of the French side is Marigot, while Philipsburg serves that role for the Dutch. The border between the two is invisible and that’s really all you need to know about the division, since everyone speaks English.

Just in time for the lift bridge at Simpson Bay

Since I was last here, the Dutch politics have apparently changed slightly, but I doubt it will make even a ripple of difference to the tourists, more than a million each year, who support most of the economy. Suffice to say, the relationships between the six islands of the Netherlands Antilles and the motherland have changed somewhat, but not enough to disturb the umbrella in your rum cocktail. French politics on the island continue in a state of ennui.  The only interesting fact is that, unlike the newly independent formerly British islands, both halves of the island are actually considered parts of the mother country. 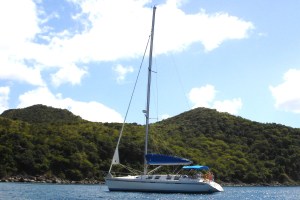 Of the many times I’ve been here, several visits have centred on Oyster Pond, directly across the island from Princess Juliana International Airport (SXM). I’ve chartered out of the Sunsail base in the sheltered yacht basin. Other visits, I’ve done private charters out of the Simpson Bay Lagoon and stayed at little hotels, good and not-so good.

Sailing trips are always fun, and one can have the best of times with a gang of friends cruising round the island and sleeping in your own cabin every night. There are several islands close by, such as Anguilla (English) and Saint Barthélemy (French), and others a long day’s sail away and suitable if you are using the island as the starting point for your cruising trip. The furthest I’ve sailed from here is St. Kitts and Nevis, but that’s an adventure for another day.

Megan at the helm

A local friend charters me his yacht for an overnight trip to St. Barths, as my young companions want to see the nearby playground of the rich and famous. Carnival is a 45.5 foot sloop, and we leave Simpson Bay marina in time to catch the 1100 am lift bridge. If we miss it we’re stuck until the afternoon. The boat sails well, but the wind is contrary for St. Barths and we arrive after sunset. Fortunately I’ve been here before and can deal with the dark anchorage. On the way back the next morning the engine overheats, so when we finally arrive back at the lift bridge it is closed for the day and we have to anchor under sail outside the lagoon. No matter, we are rescued by water taxi, return the keys to the boat, and hit the nearest decent drinking place. The boat owners will pick the boat up the next morning, fix the engine and navigate through the lift bridge.

Another bar, another Scotch

Action at the Red Piano Bar has barely got started. It’s an interesting spot which stays open to 3 am. I’ve yet to personally experience this phenomena as my eyes usually shut around 10 pm, but the three angels tell me they have a good time there.

Did I mention the weather? It’s always balmy. In April the temperature is 84°F (29.9°C) and there might be a few sprinkles of rain. It’s hotter and there could be a bit more rain in the hurricane season. The sea is always warm as well.  The last major hurricane was Lenny in 1999. Since then, touch wood, they’ve stayed away.

Our week is quickly over, but there’s plenty of time left for shopping. The whole island is duty free, so I buy some pretty gold ear-rings for the one I left behind. The ladies have bags full of merchandise.

On our last day, our flight being in the evening, there’s time for one last adventure before we return our rental car. Just past the airport is Maho Beach, right at the end of the runway. We have a good lunch and lots to drink in a bar where you can watch the jumbo jets fly in, close enough to reach out and touch them, it seems. There’s a big sign warning bathers not to stand too close or they might get blown away.  Lots of foolhardy folks try out for the thrill. Not me.

This article was originally published on February 6, 2014,