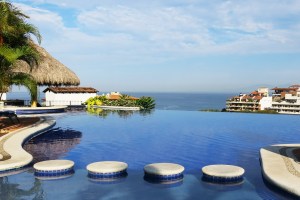 Watching the sun set from the edge of the salt water infinity pool at our condo in Puerto Vallarta, Mexico, is sublime. It’s a perfect time for Sundowners and to watch for the elusive green tropical flash milliseconds after the huge golden orb sinks below the distant horizon across the Bahía de Banderas.

I’m up to my shoulders in body temperature water, a plastic glass of icy cold Pacifico beer to hand, a group of like-minded acquaintances alongside. To one side are an older couple who have been coming to PV every year for more than 30 years, on the other a younger couple who are back for the ninth time. We are here for the second year in a row. We liked it so much last year, that we signed up again before we left. In fact, the condos that we are in are so much in demand that favourite suites have to be booked at least a year ahead. 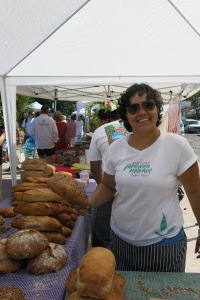 Buying bread at the Farmer’s Market

The four-year-old Selva Romantica complex is at the top of a hill, like all hills in PV, a very steep hill. Advantages: spectacular view, breezes to keep the bugs away. Disadvantages: climbing the hill to get home, more stairs. There are no elevators in the complex. Every suite is up or down a couple of flights of stairs. Not much trouble for most people but heck on aging knees. We walk to the market and get a return ride. It’s only a few blocks, but uphill all the way back and the taxi is ridiculously cheap. Carrying groceries in the heat is unusually taxing, so the taxi is a good investment, even though it lacks suspension or air conditioning.

Just before we left, I went to the dentist for some serious work, not wanting to get caught in pain whilst away. Isn’t Mexico very dangerous? — asked the dentist. ‘Ot ‘eally — I replied, for his hand was in my mouth at the time. In spite of the recent horrendous robbery-murder of a Canadian couple in nearby Ajijic (A-hee-heek), Puerto Vallarta is extremely safe. We can walk the cobbled streets late at night without fear. We can sleep in our gated complex in complete confidence of an undisturbed night. The windows are barred, so even if a villain could get inside the walls, we have an extra level of security. Our private patio is flanked by a precipitous drop which would need an expert mountaineer to ascend. 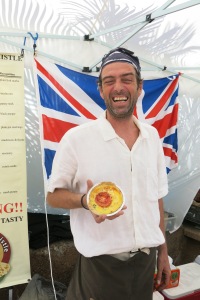 We been here just a few days, but we’ve already been in touch with friends from Ontario who winter here and friends we met last year. It’s a very friendly place. We are enjoying getting caught up on the news and local gossip and re-visiting some of our favourite restaurants and vendors at the Farmer’s Market.

The question is: will we want to return next year? Will we feel that coming back for a third year is getting stuck in a rut, or simply treading the old steps of familiarity, which can be a comfort in a world where travelling has become much less fun.

We have so many destinations we still want to visit and we do have to consider the budget, so the number of places we can see every year is finite.

Here are some of the spots we want to see or re-visit.

The easiest of these to visit, from our other little home in England, would be a trip to Scotland. I’d like to go there before the politicians ruin it with votes for independence and separation. The talk of independence washes very lightly on our colonial shores, and even in England they seem impervious to the threat of separation, from what I read in The Spectator.

Though my paternal ancestors hailed from Scotland, I have only been there twice and that a long time ago. I have researched my distant relatives and find that my namesake Lord Nigel Napier, head of our clan Napier, died in 2012, so a visit with him is out. The current Lord Napier allegedly lives in England, another vote for the Scottish diaspora. I suspect that more Scots live in Canada than in Scotland, and a quick fact-check reveals this to be so. There are 4,719,850 people of Scots descent in Canada and only 4,446,000 in Scotland. The US claims another 6,006,955, all outnumbering the homeland. If we all went for a visit at the same time, the Highlands would sink. One of the points the independence debaters make, is that this is all the fault of the English anyway, what with the forced clearing of the Highlands and the Battle of Culloden, to name a couple of beastly acts. Perhaps the English should give Scotland back to the Scots and be done with the whole thing. At least it would stop them sending wretched socialist Members of Parliament to Westminster.

Only one of the spots on our wish list is a good winter destination.  Bueno Aires, variously described as the Paris of the South or the Capital of Tango, is the second largest city in South America. It’s wildly mixed population, with heavy European influences, have led it to be jokingly described as a city of Italians, speaking Spanish who think they’re English. I suspect with that little disagreement over the Falkland Islands, the English influence might have waned. No matter, all is forgiven, and English-speaking tourists are welcome again. The warmest month is January, when most days see temperatures in the 28 to 31 °C (82 to 88 °F) range, perfect for a getaway from the frozen north. Benefit for us is that though it’s 5,520 miles or 8,885 km south and more than 11 and a half hours flying time (if you can find a direct flight), it’s still in the same time zone, cutting out the jet lag issue.

Time will tell, so we’ll have to wait and see whether the adventurous spirit yearning for new paths wins out over the old familiar steps of the past.

This article was originally published on February 27, 2014.