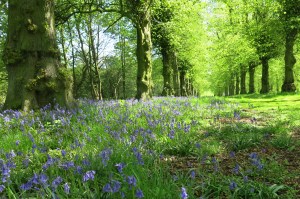 Driving down the extraordinary long lime tree avenue in Clumber Park, Nottinghamshire, in the very first days of spring, when the fresh buds have just begun to produce their bright green leaves and a carpet of bluebells stains the undergrowth, I cannot imagine what this countryside must have been like when four posh ducal families lived on their great estates in their palatial houses in close proximity, staffed by an endless supply of obsequious serfs. The fabulously wealthy estates were a combination of greedy acquisition, seizures of monasteries, grants from grateful royals, and the great good luck of having easily accessible coal beneath the ground and surly peasantry to haul it out. Because their lands were contiguous, this area wedged between the former mining town of Worksop to the north and the famed and much shrunken Sherwood Forest to the south, is known as The Dukeries. To have four Dukes living as neighbours was unusual, as throughout most of English history there were only a couple of dozen of these aristos at the top of the heap to spread around the whole of kingdom. Nottinghamshire got more than its fair share. 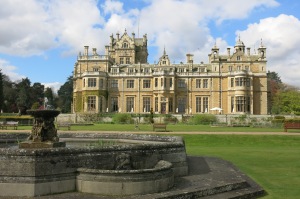 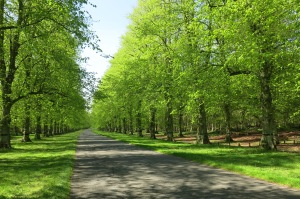 A week or so after our first visit to Clumber Park we are back to see the lime trees in full bloom with massive carpets of bluebells colouring the ground beneath. Clumber was mentioned in the Domesday Book, William the Conqueror’s round-up of all the wealth in his new land, and was originally a monastery. Well we all know what happened to the monasteries and this one came into the Holles family. John Holles, who revived the extinct title as another 1st Duke of Newcastle enclosed the 3,800 acres as a deer park in 1709 and built a hunting lodge, but subsequent dukes fancied it as their principal seat and expansion started. Much of the house was destroyed by fire 160 years later, so the 7th Duke rebuilt an even grander spot, but another fire in 1912 combined with the effects of WWI and the Depression left the mansion abandoned. It was demolished in 1938 and the park was left to the people of Worksop.

The 7th Duke’s church has survived, along with the 87-acre lake, which has had to be rebuilt several times due to coal mining subsidence. The 5th Duke’s crowning achievement, the longest double avenue of lime trees in Europe, with 1,296 common limes planted in 1840, extends for more than two miles. The visitor centre is in the old stable block with a restaurant (where I have yet to eat), but the four-acre walled kitchen garden is worth a peek. Among other curiosities are 101 varieties of local apples and 121 varieties of edible rhubarb. 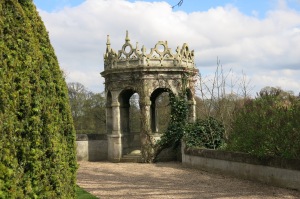 On the grounds of Thoresby Hall

Not far away is Thoresby Hall, now a 200-bedroom convention centre, hotel and spa, where we have not been able to book a room for a special night out since only packages are offered. Determined not to be packaged, we do enjoy a walk in the grounds. The land was acquired by the Earls of Kingston, who built the first grand house, which was remodelled by the 4th Earl, who also managed to swipe some of Sherwood Forest to add to his own park. The 5th Earl became the 1st Duke of Kingston in 1715 and so on  … history … another fire … another house … pull that one down and voilá, here we are sipping afternoon tea in the Great Hall of the 1874 creation. And what happened to the aristos, you may ask? The last of the line died in 1955 and the family, fearful of more coal mining subsidence, sold the property to the National Coal Board in 1979 and, after passing through a number of hands, it opened in its present form in 2000. 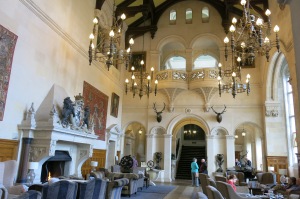 Afternoon tea in the Great Hall at Thoresby

Now Welbeck Abbey, which we can’t visit, is another story. It too was mentioned in the Domesday Book as a monastery, and after their dissolution by Henry VIII was acquired by the 7th Earl of Shrewsbury, who sold it to the son of Bess of Hardwick, (of Hardwick Hall and Chatsworth fame) whose own son became the 1st Duke of Newcastle — not to be confused with the other Holles family 1st Duke, over at Clumber next door, who picked up the line when it became extinct. Anyway, the property descended through the Cavendish family, who continued to add to the building, until it passed into the Bentinck family to become the seat of the Dukes of Portland. During WWII the army leased the main property as a training college. The unmarried elder daughter of the 7th Duke, lived on and owned most of the 17,000-acre estate, until her death in 2008, shortly after the property had been returned by the army. Her younger sister had married an Italian Prince, so her son William Parente inherited the estates from his aunt and lives there with his family. We won’t disturb him today, but we can visit their Dukeries Garden Centre and the School of Artisan Food in the former stables, an art gallery and the Welbeck Farm Shop in the former gasworks and some craft workshops off the former kitchen garden.

I’m sorry we can’t visit the house because it is said to be simply vast, with the added attraction of a huge underground ballroom and a tunnel network which allowed the 5th Duke to cross his estate by carriage entirely underground. The family are dabbling in the music business and have opened the grounds for a concert, so perhaps one day we’ll be able to share what they call home.

Another ducal palace we can’t visit is Worksop Manor. Since the 14th century it was owned by the Talbot family, later the Earls of Shrewsbury, and for a while served as Mary Queen of Scots prison, as she had been put in charge of the very wealthy George Talbot, the 6th Earl. Eventually the house passed by marriage to the Dukes of Norfolk, who built extensively.  After a fire in 1761, a vast new house was started, which would have been one of the largest houses in England, had it been completed, but the 9th Duke died and the title passed to a distant cousin, whose family never lived on the estate and it became neglected. It was later sold to the Duke of Newcastle, yes, the one next door at Clumber. He demolished the main wing with gunpowder and added the land to his own properties. Later the surviving parts of the house were formed into a new mansion and, along with part of the estate, eventually acquired by Sir Thomas Robinson, the High Sheriff of Nottinghamshire, and a distinguished breeder of thoroughbreds, whose descendants live there still, operating the Worksop Manor Stud.

If I thought they’d be impressed with the mighty Corsa pulling up in the driveway, I’d attempt a visit. But I suspect I’d be turned back by forelock-tugging grooms long before I got a sight of the house.

This article was originally published on May 18, 2014.