THE KING OF PORK PIES 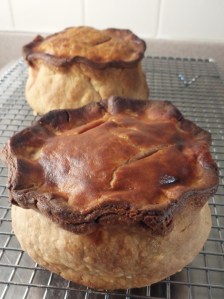 One tasty morsel you can hardly find in North America is a decent pork pie. I’m not talking any old pork pie, but one filled with succulent chopped pork meat, not too fatty, not too lean, and a delicious jellied pork stock, in a thickly crusted pastry. As soon as we arrive in England for one of our regular visits, we head to a good food shop, usually Marks & Spencer or Sainsbury, and buy a pork pie. Traditionally served cold, with some tangy Branston pickle or chutney on the side, this is often our first picnic style meal, eaten on the run, while we are unpacking at our little South Yorkshire cottage.

The king of pork pies is the Melton Mowbray original and producers there have recently gone as far as registering their product with a Protected Designation of Origin status, like Champagne, or Parma ham. In the shops, a Melton Mowbray pie commands a premium price, and I’d say it’s worth it. The pies are slightly bowed out at the sides, which comes from being baked without a mold, and particularly delicious inside. 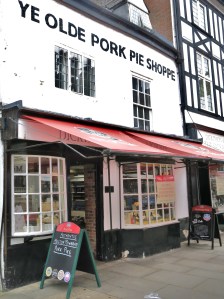 Over our first few days, I sample pies from both the top food chains mentioned earlier. They’re good pies. But the pork is minced, not chopped, and the casings are clearly factory, not hand, made. So on a long trip back from the south of England, driving north on the M1 motorway, just north of the county town of Leicester, I spot a road sign to Melton Mowbray. On a whim we turn off the main highway and head east. We pass through little villages on a winding minor road, with signposts to quaintly named places such as Barrow-upon-Soar, Burrough-on-the-hill and Frisby-on-the-Wreake. On the outskirts of Melton Mowbray, Diane asks innocently enough, how we are going to find a pie shop, and it’s a good question because I haven’t done any research, and have no idea. I’m just about to admit that when I spot a sign to Ye Olde Pork Pie Shoppe, and then another. We park and it’s an easy walk through the busy market day stalls to the shoppe. How clever of them to know we were coming. 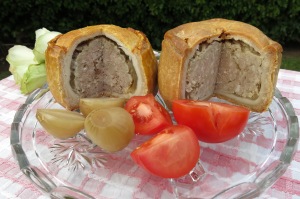 In we go, buy an authentic hand-made pie, and ask for the recipe, which they decline to share. They point to a wall of photographs of the pies being made on the premises, which I study. It’s late in the afternoon and most of the pies have gone, so as they seem keen to close up shop, we head out without further questions. On the way back to the car, at another butcher’s shop, offering a different brand of equally authentic pies, I spot a series of curious wooden forms. They’re round, like half of a short, fat rolling pin. The friendly butcher sells me a small one, suitable for making an approximately one pound pie. He warns me that the pie is easy to make but the secret is in the pastry. The dollies, as he calls them, are all out of date, which is why they are cheap, EU rules having forced metric measurements even on Melton Mowbray pies. I treasure my dolly all the way back to Canada, where she will be put to good use. 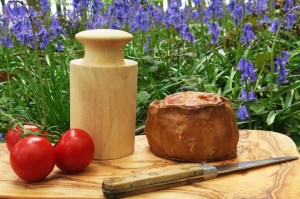 An authentic Melton Mowbray pork pie in the bluebell woods, posing with my new dolly

Meanwhile, the woods are full of carpets of bluebells, as we head the 50 miles to home. Feeling a bit peckish, we stop for an impromptu picnic, lay a blanket in the cool shade and devour our pie. It never makes it home. And it is truly an outstanding pie. The pastry is a wonderful, slightly lardy texture, the filling simple and tasty. The mighty Corsa delivers us home with full bellies. 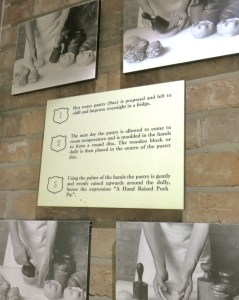 Secrets on the photo display at Dickinson & Morris

Mission accomplished, I’m intrigued by the history of the pie and why this little town in the middle of England should become so famous for such a singular product. It turns out that over the centuries, the Melton Mowbray area has become equally famous for Stilton cheese. The development of the dairy industry was largely a result of land being enclosed by wealthy landowners in the 1700s, which coincidentally also produced a perfect landscape for fox hunting by the gentry, while the serfs milked the cows. Whey is a by-product of cheese making and is perfect food for pigs, so pork became a big part of the local diet.

Agricultural workers would take a parcel of pastry wrapped around a pork filling for their lunch, discarding the pastry before eating. Three famous local hunts —  Quorn, Cottesmore and Belvior (which we all know is pronounce ‘beaver’) – made Melton the capital of fox hunting and visiting hunters discovered the local pies when they saw grooms and hunt servants eating them. By then the pastry had been made edible, and the pies filled with jelly to prevent them collapsing during the rough ride during the chase. Ye Olde Pork Pie Shoppe is run by butchers Dickinson and Morris, founded in 1851. It is the oldest bakery and last one to actually make their pies in Melton Mowbray. I was sorry not to have been able to watch one of their demos, but the photographs on the wall gave me a few hints on how to form the pastry round the dolly. 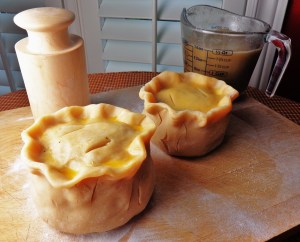 Back in Canada, with an idle couple of days ahead of me between other assignments and chores, I decide to tackle the production of a couple of pies. First, I head down to the St. Lawrence Market where Pat Gasparro, my favourite butcher at Brown Brothers, cuts me off the requisite amount of fatty pork shoulder and lean loin. The two different meats are essential to make the filling just right. Too much of one and it will be too fatty, of the other too dry. The Melton Mowbray recipe calls for fresh pork, not smoked, like ham. The resulting filling, when cooked, will be grey, like a roast pork, rather than pink. I ask him for some bones, to make my stock and jelly, and he sells me a big bag for a buck. I promise him a pie if it turns out well.

Step one is to make the stock and let it set into a jelly. This is an overnight process. The pastry also needs to rest in the fridge overnight. Then I make my pies, the pastry is like play dough and easy to handle. The thick disk is hand raised up the dolly and then carefully removed. This was a tricky part, but by the second pie I had the hang of it. Using a measuring scale, I weigh out the requisite amount of filling and roll it into a ball, then drop it into the casing. A lick of beaten egg helps the lid seal onto the sides. To make the pie authentic, I scallop the edge with my thumb and fingers. It looks good so far. Then they have to sit another night in the fridge. Finally, I bake them, allow them to cool, fill them with the stock and put them in the fridge to set, another day gone by. By the fourth day, we’re taste-testing them. My word, they’re really good. I might have cooked them a little long in a too hot oven, so the pastry is a little dry, but otherwise they’re delicious. We down the pies in no time at all. Pat will have to wait for his free sample until I make another batch.

PS: Since writing this article in the spring of 2014, I notice the newly renovated local Loblaws supermarket in Toronto is offering what they call Melton Mowbray Pork Pie. They’re locally made, claims the butcher, and I expect he doesn’t know he’s violating the naming rules. Oh well, we are in the colonies. The taste test does not go well. It’s a pork pie all right, but made with smoked pork, not in the genuine Melton Mowbray style at all. It could have made the summer of 2015 profound. Black mark to Loblaw. 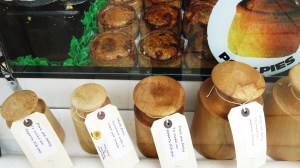 Home-made pork stock will jellify in the fridge
Ingredients
Instructions