The greatest joy of driving around the countryside looking for good stories to tell on the next season of my television series Escapes with Nigel, is the really interesting people one meets. At a little farmers’ market in East Gwillimbury, just north of Newmarket, Ontario, on a recent Thursday afternoon, I meet Leslie Forsythe, who has a farm in Uxbridge. I’m attracted first to her rhubarb, as I have every intention of making a wonderful rhubarb crumble with a bunch of these succulent stalks when we get home. She tells me about the Forsythe Family Farm, which for years they’ve opened up for all sorts of activities.

This year their leased property in Markham has had to close. The developers want to pour more concrete all over it. Now their activities, mostly for school tours, but for the whole family during special events, are based at their home farm and forest. They allow kids and adults to appreciate the farm life and encourage all of us to reconnect with farming and food production. It’s important, she says, for us to know and care where our food comes from, and I concur.

Farmer’s markets abound during the summer, and some run year round. If you’re fed up with standardised produce from a supermarket chain, check out what’s around you. You’ll be amazed at the variety and you’ll meet some interesting farm people too.

Having spent many school holidays parked on various relatives and long suffering friends of my expatriate parents with farms in the south of England and Wales, during my childhood, I’m very familiar with farm life. Diane is a bit more squeamish, which is why she won’t eat lamb or veal, and utterly draws the line at foie gras. I tease her about carrots screaming as they are pulled from the ground.

The reality is that there’s much about raising animals for food that seems brutal, but as long as the beasts are treated kindly and don’t suffer during their brief lives to market, I accept the fact that we do eat once living creatures. That’s a debate for another day. 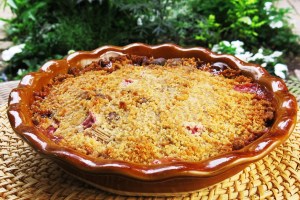 Whatever farm I was staying on, in  the early summer, and again in the autumn when there’s a second crop, rhubarb was a staple dessert. Often served steaming from the oven, with rich hot yellow custard poured over the top, this was the food of the gods to a post war boy. My godmother Pam had a carefully fenced in vegetable plot on her pig, chicken, duck and apple farm in Hampshire, wherein grew vast swathes of bright red stalks, topped with huge green leaves. The fence was to keep stray livestock from eating her produce, and any escaped pigs from sampling the tempting rhubarb leaves, for they are quite toxic and will kill a greedy porker. When we tired of rhubarb pie, stewed rhubarb and rhubarb crumble, she would let me assist her in crushing the cooked stalks through a sieve for an amazing rhubarb fool or coulis.

So when I see the succulent stalks stacked up at the back of Leslie’s stall at the East Gwillimbury Farmers’ Market, those happy memories come rushing back. I check my recipe book and realise that though I’ve written before about apple crumble, rhubarb crumble has somehow been missed. So without further ado, here’s my favourite recipe. Try it now while rhubarb is in season.