Once I was considered an ‘early adopter,’ one of those people who have all the new business toys before everyone else. I was one of the first people I knew to have a mobile phone (the battery weighed about 20 pounds and had to be slung over the shoulder, or left in the trunk of the car), a laptop (a Radio Shack TRS80, known affectionately as a Trash 80), an electronic organizer (a Sharp, I think), a touch screen smart phone (I loved that Palm Pilot) and other gadgets – but now I’ve been left behind by inevitable progress. Even clinging to my beloved Blackberry makes me seem outdated and I suppose that will be the next to go, along with my desktop PC. I barely manage to keep up to date on Facebook, and I’ve never learned to Tweet. I read a daily paper, magazines and books printed on real paper, not on a screen. I’m amused by the note on a bookmark given out free by the Book City shops, which reads, in part: The new Bio-Optik Organized Knowledge device, or B.O.O.K., is a revolutionary breakthrough in technology … no wires, no electric circuits, no batteries … compact and portable, it can be used anywhere … never crashes or requires rebooting. Will the touch screen generation get it? I doubt they will even see a bookmark or know what it’s for.

With all my book-age disadvantages, it’s amazing that I manage to communicate at all. I insist on writing down ideas with a fat Montblanc pen in an unlined Moleskine notebook, with a built-in elastic to keep random bits of paper from escaping. There’s no search function, so I have to re-read words I have written before to get to the information I need today. Curiously, re-visiting past events is often a great pleasure.

Taylor and I escape the design studio to go sailing

In the last week the Moleskine has become somewhat less pristine. Wet whisky rings have impressed themselves on the pages as new Scotch delights have been sampled, and perhaps over sampled. But imagine the damage to a smart phone or an electronic notepad, its circuits sparking as they fight the onslaught of premium Scotch as a drop or two spills from the neck of the bottle. It’s not to be contemplated, unless one has had the forethought to purchase a Scotch and waterproof device. The last time I got a phone wet enough for it to stop working, the kind clerk in the phone store revealed that they guard against phone abuse by inserting a little piece of Litmus paper in each phone, which obligingly turns pink at the tiniest sign of moisture, instantly invalidating the guarantee. Now, when I’m out sailing, perforce a damp sport at the best of times, the phone stays in its clip just inside the cabin, where I can hear it ring and ignore it easily.

This all leads me by a circuitous route to the redesign of my website, originally a do-it-yourself affair using the excellent and modestly priced Word Press program and under the fun title Gentleman’s Portion. It was doing well, with a story posted every week for nearly a year, but I was greedy and wanted more: more design, more links, more functionality and more readers. All this I was promised by an expert, who expertly lifted some more funds from me, changing the design and the name of the blog. Sadly, along with a design I didn’t care for, the added links and functionality came with a marked drop off in readers.

Well, let’s leave that chapter behind. Diane said: “If you want my expert advice, never trust an expert.” I couldn’t have said it better. After two more years of blogging, it’s time to turn back the clock. Salvation is at hand, because my good sailing buddy and expert graphic designer Taylor David has taken my website in hand and restored the original name with a new, clean design, while at the same time allowing me to manage the content myself. What you see today is the result. I hope you like it.

Now what, you may well ask, has this to do with whisky? Everything, because the re-design and content meetings have all been conducted in parallel with Scotch tasting sessions. Why not kill two birds with one stone? The first meeting was conducted under the influence of the youngest bottle in the famous Scotch bucket. 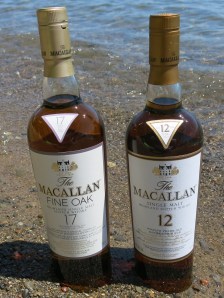 The Macallan, 12 years old, is a lovely drinkable single malt, perhaps one of my favourites, medium and balanced on the tongue, rich straw in colour. The original bottle retailed at $CAN90 for the 750mL bottle and I see it’s now sold out at the LCBO. I should feel guilty as one of the crew and I finished off the remnants of a bottle at our host’s house after our “Escapes with Nigel” wrap party the other night, but I don’t! Tasting notes show that we found strong hints of fruit and honey. Back at the more recent tasting we moved on to The Macallan, 17 years old, which I had in the Scotch bucket for a while and probably bought in duty-free at an airport as it’s not available at the LCBO. The 750 mL bottle compares in price across Canada at $CAN158.00, and the 15 years old version is available at $CAN149.95 . The colour is light amber and it’s softer on the tongue, but richer in spice and peaty, wood smoke flavours.

One Balvenie standing, one fallen soldier

Ever gluttons for punishment, the next meeting we started with another youngster, The Balvenie Signature, aged 12 years. The LCBO price is about $CAN84.95. Once again we noted honey, this time with overtones of vanilla. For comparison, we moved upscale to The Balvenie New Oak, aged 17 years. I couldn’t find this at the LCBO either in  my research, so it must have been a gift, but the price compares with The Balvenie Doublewood at $CAN199.95. The 17 year old has a richness and complexity missing in its younger self, with deeper vanilla flavours and a hint of toffee. This year master blender David Stewart, a nice and knowledgeable man, whom I met a few years ago in Toronto – he was the one in the kilt – celebrates 50 years with Balvenie. Let’s fill the glasses again and toast him: Sláinte!

Saving the best for last … smoking!

For our final meeting, close to an important anniversary, a very generous friend had presented me with an exceptionally fine bottle of Highland Park, aged 25 years, which comes from the most northern distillery in the British Isles, in Orkney. This was deemed a sufficiently auspicious occasion on which to open the bottle. Before we broached the 25, we started with a younger version I already had in the Scotch bucket. Highland Park, aged 18 years, retails at the LCBO for $CAN179.95. This is a serious single malt, bright gold in colour, with flavours of flowers, syrup and peat smoke.  This Scotch gets rave reviews from whisky writers around the world and one can see why after just a taste or two.

We’ve saved the best for last. To launch the website and finish our orderly progression through my Scotch collection, we open a lovingly crafted wooden casket, wherein lies the singular treat: Highland Park, aged 25 years. As this was a gift, I did not check out the price, but I suspect it’s more than double the 18 year old. If you want a taste, don’t expect to find it in the Scotch bucket. This one stays under lock and key and away from the casual guest, for very special occasions. It has a higher alcohol content that the 18 year old and has been matured in first fill sherry casks, which not only impart a wonderfully rich, spicy, dry smoky flavour, but also an intensely dark colour. The hints of toffee, and even fudge, make this sweeter than you’d expect, but exceptionally pleasant.

After just a wee dram, we consider Gentleman’s Portion well and truly launched. And to my loyal readers, welcome back.

PS: Whisky Galore was the title of the 1949 Ealing Studios comedy film, featuring the heroic efforts of a bunch of Hebrides islanders to acquire the washed up cargo of Scotch from a shipwreck, a story which inspired my photography which accompanies this article. A rare screening of the film will take place at Toronto’s TIFF Bell Lightbox on Saturday, August 1, 2015 at 12:45 pm.