GETTING READY FOR BONFIRE NIGHT

One month from tomorrow it’s the biggest night of the year in Lewes, East Sussex, unblemished by PC revisionists or the spoil-sports from ‘Elf and Safety.

If you need a reason to travel to England in November you need look no further than the events that are about to unfold on November 5th in Lewes, in East Sussex. It’s officially known as Guy Fawkes Night throughout England and Bonfire Night in this little town of about 15 thousand residents. Sure Lewes has an 11th Century castle, a 14th century Tudor house belonging to one of the wives of Henry VIII, a ruined priory and a maximum security prison. Lots of little towns in the south of England have this much history, places of interest and more, but what they don’t have is the biggest bonfire celebration in England, possibly the world. Up to 40 thousand spectators attend from all over the south and perhaps even further afield. People who haven’t been have no idea what they’re missing. It’s more fun than a burning barrel of tar. Oh, wait, they have those too.

It all started when Guy Fawkes and some Catholic chums tried to blow up the House of Lords during the Gunpowder Plot of 1605. The plot foiled, an act of public thanksgiving was to be celebrated in every parish in England every year, in perpetuity. Along with that annual event, Lewes also had 17 Protestant martyrs to remember. These souls lost their lives to public burning mostly in June 1556 and June 1557, during the tumultuous reign of the Catholic Mary I, who fortunately kicked the bucket in 1558, which put a stop to the awful conflagrations.

Commemorative parades were held intermittently over the years, and banned altogether by that big spoil-sport Oliver Cromwell, but really got going in the 1820s when large groups of Bonfire Boys started celebrations, more like riots apparently. This led to special police forces being drafted in from London during the 1847 affair, to put down the exuberant excesses. After that run in with the law, the existing Bonfire Societies were formed, the oldest still extant being the Cliffe group, founded in 1853, with competitions between them to see who could have the best parade and the biggest fire. To mark the sacrifice of the 17 martyrs, 17 burning crosses are still carried through the town by each society and commemorative wreaths laid at the War Memorial in the town centre.

At the same time another tradition got going. The official costume for the Bonfire Boys is a smuggler’s outfit, with each of the seven societies having a different coloured stripe. The purpose was to make everyone look the same and help prevent individuals from being arrested by the police. Now things are much more under control and there are strict safety rules in place about the handling of fireworks. 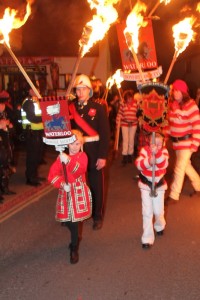 Along with the smugglers in various colours of striped sweaters, there are groups of “pioneers,” with each society picking a couple of themes. If you have a yearning to see folks dressed up as American Civil War soldiers, Ancient Greeks, buccaneers, English Civil War soldiers, mediaeval folk, Mongols, monks, Moors, native Americans, Romans, Siamese dancers, Tudor ladies and gentlemen, Victorian military, Vikings or Zulus, this is the place to be. I heard of one Roman, who switched to another costume because he was tired of being cold, parading around town in November in sleeveless armour and a drafty leather kilt, but these are hardy folk and the parades go on regardless of the weather.

Because my mum lives in Lewes in the Waterloo Bonfire Society area, that’s the group we’ve joined. We’ve been in touch with Val, to get our red and white striped smugglers’ sweaters knitted to size along with our warm knitted red caps. We picked these up in June. To complete the outfit we’ve got white trousers, boots, sturdy wide brass-buckled belts and authentic red spotted neckerchiefs. Mandi, who sends out regular electronic newsletters and notices, keeps us in touch with events leading up to the big night. Unfortunately we won’t arrive in England in time for some of the out-meetings. The bonfire season runs for a month or more, with lots of little villages around the county hosting a precursor event and the Waterloo Bonfire Society sends participants to many of them. Leading up to the big night are lots of other society events and we’ve been invited to a few of these. If we get there in time, we’ll lend a hand with the bonfire building at Malling Brooks Field or torch dipping at an undisclosed location, where we might also get an advance peek at the highly secret parade tableaux. These are hand-made effigies depicting very current events which are pulled through the town to the fire site, where they are blown up.

On November 5th, we’ll dress early, visit mum’s little house less than 100 yards from The Lamb, headquarters of the  Waterloo Bonfire Society, to get her blessing. Then it’s off to The Lamb where the WBS torchlight processions start. There are several and the last one is near midnight. Next week I’ll be able to write all about it.

The excitement, the costumes, the flames, the fireworks, and the sore feet. I can hardly imagine how much fun it’ll be. Mandi tells me it’s a one-of-a-kind experience. Of course, being visitors, we’ll slip away from our hotel the next morning for the long drive back to Yorkshire and miss all the fun of the two-day clean up. Perhaps next year we’ll stay for that too.

This article was originally posted on October 31, 2013.