ESCAPES – ON THE ROAD AGAIN

With Lisa Burrows of Pat-a-Cake

Now that there is a frost in the air, it’s almost impossible to remember how hot it was shooting new episodes for the second season of my television show, but that was better by far than the conditions on the first season. The original episodes, which can still be seen on Bell’s video-on-demand channel, were shot in the very cold weather of late winter and early spring, though on brilliantly cloudless days. It’s no fun pretending to be warm while wearing only a sports jacket, scarf and gloves while the crew are bundled up in their Canada Goose jackets watching me stumble through lines as my face slowly froze.

Once again, apart from the temperature, we were extraordinarily lucky with the weather. Only one shoot was delayed an hour while we waited for the early morning rain to clear. All the rest of the days had mostly sunny weather, hot yes, but perfect for videotaping.

Getting ready to fly in the Sopwith bi-plane

Through weeks of research we’d finally nailed down the locations we wanted to cover in the next eight shows — and what a range of stories we had planned. The one I was looking forward to the most was flying in a World War I bi-plane at The Great War Flying Museum, but sailing a luxury Catalina yacht, driving a 1910 traction engine and a horse drawn wagon were all adventures I was anticipating with excitement, and some trepidation. Then there was the dressing up: in a mediaeval tunic, as an 1850s gentleman, in beekeeping gear and as a yachtsman. And what a wonderful range of people I got to meet and chat with.

I’ve already written about the beekeepers, who feature in our first show, and the knights and their ladies of the Society for Creative Anachronism, and the costumed folks at the Pickering Museum Village, as well as the ace flyers in their replica planes. Everyone opened their doors to us and gave of their time with the utmost generosity, and I hope their enthusiasm and passion comes across in their stories. There wasn’t a dull one in the bunch. 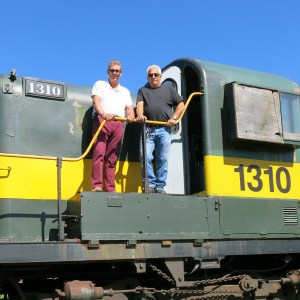 With engineer Denis Godbout on the York-Durham Heritage Railway

We had great fun on the York-Durham Heritage Railway, where I rode in the cab with the engineer in the 1950s diesel locomotive, had great fun cranking the engine up a notch to a terrifying 25 miles an hour and especially blowing the iconic horn. Later in the show we checked out the historic sights of Uxbridge including the fascinating Foster Memorial and the Leaskdale Manse, home to Anne of Green Gables author, Lucy Maud Montgomery.

We sailed into Frenchman’s Bay, where a splendid new harbour entrance is almost complete and visited the merchants of the Pickering Nautical Village. I stuffed my face with chocolate ice cream in take after take – it was so hot it kept melting – but sadly that scene got left on the cutting room floor. But in the bakery I was presented with an Escapes with Nigel chocolate zucchini cake. We saved that for the crew supper and it was delicious.

One episode was devoted to the farm-to-table movement, which we re-christened farm-to-market-to-table so we could include a farmers’ market. The folks in East Gwillimbury were great, and though their Thursday afternoon market has closed for the season, our show will run for three years, so they’ll benefit from the exposure next spring. I was presented with another logo cake too — yummy chocolate. We met farmers who run a community supported agriculture (CSA) program which provides customers with a weekly box of produce all season, and a wonderful chef who let me prepare an appetiser in his kitchen. 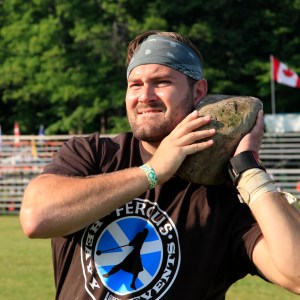 Heavy events at the Fergus Scottish Festival and Highland Games

At the Scottish Festival and Highland Games in the picturesque little town of Fergus, every facility was made available to us and we camped all day in the thick of the so-called Heavy Events (caber tossing and that lot) to the thrilling skirl of the pipes. Apart from meeting really large men, throwing impossibly large objects around, we watched highland events from dancing to sheep shearing. It all ended with the massed pipes and drums.

Finally, we investigated the geology of the Niagara Escarpment and I got to drive the convertible up the tricky hairpins of Rattlesnake Point, before descending to the Country Heritage Park in Milton for their Heavy Horse Days. I got to bond with the beautiful big Percheron plough horses and help shoe a patient miniature horse.

It was a busy summer, but with an excellent crew we made it through without any major trauma. Then the shows were edited and there were some regrets as favourite bits got cut out for time. Now they’re all packaged up and awaiting broadcast and I hope the participants feel we’ve done their stories justice. The shows are all available on our Escapes with Nigel website along with all sorts of extras and location photographs, and for those with Bell Fibe TV, they’re worth watching in full-screen high definition, with the first episode starting on Sunday, November 2, 2014, and a new show airing every Sunday after that.

Check it out and let me know what you think, and more importantly, get out of the city and find one of the hidden treasures we’ve discovered for you in the country around southern Ontario, in Barrie, Caledon, Cookstown, East Gwillimbury, Greenwood, Hillsdale, Leaskdale, Milton, Minesing, Pickering, Uxbridge and Zephyr.