We are very lucky to have inherited a little home away from home in Yorkshire, England’s largest county. The cottage is tiny, located in a small village on Yorkshire’s southernmost border, where it touches Nottinghamshire and Derbyshire. Less than a mile away, according to Google Earth, the three counties touch. Nothing marks the spot on the ground. Local lore has the spot a couple of miles away in the neighbouring village of Shireoaks, where once stood, they say, a massive oak at the triangulation point of the three shires. Google wins the day, but I’d like to go and plant an oak sapling at the spot my GPS marks. Perhaps I will.

Meanwhile, we enjoy the bucolic countryside. From the patio at the back of the place we look to the horizon and there’s not a building in sight. At night, not a home brightens the darkness. From the front we look over our posh neighbour’s lawn, carefully manicured by a weekly gardener who makes sure the stripes in the lawn are properly aligned. Our living room view makes it seem their lawn is part of our property. We get the benefit without the work. Our own, closer, lawn is spotted with moss. After a good application of weed killer, the moss is brown, but scarification and reseeding will improve the look by next spring. 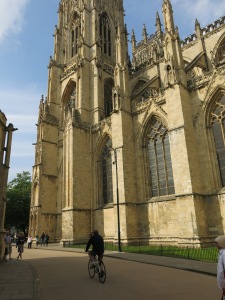 This is a great base from which to launch expeditions around Europe. We’ve left here to spend weekends, for instance, in Provence and Basle, just a short flight away from a local airport. But we have not explored much of Yorkshire itself. Sure we’ve made day and overnight trips to nearby stately homes – Chatsworth, Haddon Hall and Hardwick Hall – in Derbyshire. We’ve explored Nottinghamshire’s Dukeries, where several dukes traditionally had their estates, and enjoyed a spa visit at Thoresby Hall where the Duke of  Kingston once lived and is now a hotel and resort. Everywhere else in Yorkshire is north, so on a bright late summer day we head out for a three-day expedition.

Only 90 minutes away, not much by North American standards, but a significant journey in England, lies the ancient city of York. It’s straight up the A1, almost as good as a motorway. We find our way into the town, with the historic Minster looming over the houses as we get closer, acting as a beacon. Stuck in heavy traffic and wondering whether our hotel is close, I happen to look right and spot the entrance beside us. Diane, the brilliant map reader, has brought us right to the door.

We check into the York Hotel du Vin, one of a chain of boutique spots located in historic re-purposed buildings across Britain and with a clear focus on the joys of wine. Our room is named after Raul Collette, a distinguished bubbly. There’s lots of day left to explore, which on the advice of the receptionist we do on foot, parking being very limited in the old town centre, she says. It’s a pleasant 15-minute stroll to the first signs of York’s historic roots.

Traditional Royal entrance to the city

Mickelgate Bar is the most important of York’s gateways and as far back as Roman times there was an entry to the city here. The present building, which straddles the modern road, dates back to the 12th century. Traditionally this is the way monarchs have entered the city, though some unfortunate aristocrats have ended up with their heads on a spike, especially during the bloody Wars of the Roses.

Stretching out each side of the gate and up some steep steps, are remnants of the mediaeval wall that encloses the original city limits. York has more miles of intact wall than any other city in England, and most of the distance can be walked. Heading north east we walk about half a mile along the top, looking down over the grassy mound below the wall and imagining what it would have been like to storm the city. Hell, I imagine. This stretch of the wall brings us to the River Ouse, which we cross into the old town proper. 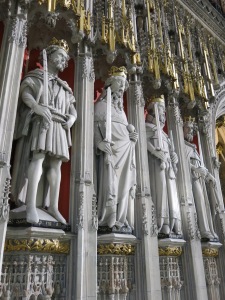 There’s almost too much to see in York, but we have been able to see the Minster towering over the rooftops for most of our walk, so that’s where we head first. York Minster is the largest Gothic cathedral in Europe and has the widest nave. One of the highlights is the noted Great East Window, completed in the 13th century, the largest mediaeval stained glass window in the world, but it’s being renovated. However, they’ve cleverly put up a massive scale reproduction of the entire work of art and behind this the restorers toil. There’s a good interactive section on what they are doing.

The only royal buried here is the infant son of Edward III, who died in 1337, when the minster was already several hundred years old. My favourite spot is the Quire Screen, which helps support the great Tower, as well as separate the choir from the rest of the minster. It shows the 15 kings who reigned during the Norman and mediaeval construction of the cathedrals, a splendid piece of portraiture. Our visit would have been enhanced by a guided tour, but we had just missed one and another didn’t start for a while, so we wandered around with the purchased short guide book and discovered most of the highlights of this splendid edifice.

Back in the sunlight, we head for the nearby Shambles, an authentic narrow mediaeval street. At one time most of the premises were butchers shops, but the only one left is The York Sausage Shop. In my search around the Midlands and North for a perfect pork pie, this establishment has long been on my shopping list. The pies are made on the premises and come in many varieties. But they are not hand formed, like the traditional Melton Mowbray style pie. In the back the baker was forming the pies in one machine and capping them with crust in another, making for a very standardized product. The filling is smoked pork, or ham, and the one I sampled very salty and greasy. No more York pies for me. Back to the authentic variety with chopped cooked pork.

After as few more purchases, it must be time for tea and we cannot do better than Betty’s Tea Room.  We stop at this Danish/Yorkshire institution in the middle of the afternoon rush. Our wait isn’t long and we are shown to a pleasant table where we can watch all the activities as well as the passing scene. Our proper loose leaf tea and warm scones come quickly, nicely served by a traditionally uniformed waiter on a classic tiered silver cake stand. The tea is robust, for once the tea pot doesn’t leak and the scones are fresh and tasty. We debate whether the cream goes on first and then the strawberry jam, or the other way round. Either way our tea time break is delicious. When we leave, the queue is out the door and the waiting customers are speaking many languages.

We’re anxious to discover York’s Viking heritage and Jorvik Viking Centre is the place to go. The entryway is jammed with schoolchildren, so we skip the displays (there were displays under the floor, but it was hard to see through the kids sitting on them) and head straight for the discovery ride. Comfy seats hold six, but we get a pod to ourselves and are whisked back in time through a Viking village. Our personal audio guide gives us the lowdown on what we are seeing and can be heard in several languages of choice. The animatronic folk are a little stilted in their movements but realistically done, especially the chap grunting and groaning in the outdoor privy.

The ride takes just a few minutes, and wends through the village efficiently, much more so than allowing people to wander on foot at their own pace, and also prevents anyone touching the exhibits. The lighting is very dim which covers up any deficiencies in the displays, but adds a dramatic feeling. After the ride, we are in a series of displays showing Viking relics dug up in York. There aren’t many, there’s too much to read and it’s poorly displayed, so this section  is traversed quickly. A charming non-Viking lady makes me a couple of replica coins the old-fashioned way, then we are out in the gift shop and the sunshine.

One fact we did learn was that the Vikings rebuilt much of the city abandoned in Roman times due to flooding, so our last stop of the day is in a little spot that is famous as the pub that floods. The Kings Arms sits on the quay side of the River Ouse. Inside the door is a measure showing how high the waters have risen, one major episode only a couple of years ago. The staff resignedly haul everything upstairs when the flood threatens and then power wash the establishment when the crisis is over. The river is behaving when we drop by for a late afternoon beverage. We take our drinks to benches outside on the waterfront and watch tour boats loading and unloading their passengers. The boats seem to come back quite quickly, so I don’t imagine there’s much to see, although they advertise an “entertaining and informative” trip. Little red motor launches for hire scurry up and down the river for do-it-yourself boaters.

After eating and drinking our way around York, the brisk stroll back to the Hotel du Vin is essential before the next round. We arrive in time for cocktails, which we enjoy on the patio with a friendly American couple as the bar seems reserved for wine and whisky snobs only. The weekly offering — Battered Smoked Haddock flavoured single malt. No sign of a blended Scotch for me. Oh well, lots more exploring tomorrow.

PS: Please leave a comment if you found something useful or interesting in this story. Or please add your own experiences with these destinations for others to share.