DIARY: Kitchen renovations in Yorkshire and lunch at the Devonshire’s.

I love cooking, but the kitchen in our little inherited cottage in Yorkshire is hopeless. The ancient electric stove has died and turning it on causes all the fuses in the house to blow. Not wanting to mess around with the lethal 220 volt UK power system, I turn the stove off and leave it dormant. It’s not worth fixing, but replacing it will have to wait until we renovate the whole kitchen, the project we are planning with Simon, the friendly local contractor. Alternatives at hand are an ancient electric frying pan, a toaster and a microwave. The first day we are back, I try for a bacon ‘sarnie.’ The toast part is easy, but as soon as I get the bacon frying nicely, the pan starts to spark at the handle and then dies. The bacon gets finished in the microwave, never a very satisfactory method, the pan ends up in the rubbish bin and we devour my less than excellent effort. The next day I buy bacon on a bun in the village bakery, while picking up the morning paper at the Co-op. It’s not nearly as good as the Canadian back bacon on a bun, with loads of mayo, we get during our frequent Saturday peregrinations to Toronto’s St. Lawrence Market. 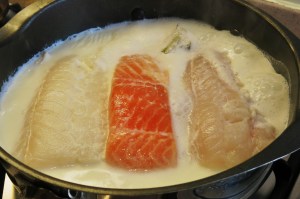 Since we’ve just blown the renovations budget on some of the Danish mid-century modern that is suddenly fashionable again, and for which Diane has developed a new passion, starting early on the new kitchen is out of the question. We’ve bought new lamps and ceiling lights, suited to the 50s look.  Gently used teak furniture – a coffee table, book case and desk – is on the way from various online second-hand dealers. Prints we’ve brought from artist Michael Whitlow in Puerto Vallarta have been framed locally and hung. While we’ve been away, Simon has ripped off the hideous Anaglypta 3-D wallpaper and replastered extensively, fixed the rising damp and the cracks, and painted most of the interior. It’s looking fabulous, but clearly we’re not going to be doing much entertaining until the kitchen is completed. 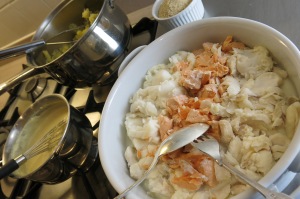 Fortunately there’s wonderful food at Marks & Spencer and Sainsbury’s in the nearby town. Their ready-to-eat selections should make Canadian supermarket chains ashamed. With only the microwave functioning, and lots of other chores to occupy our brief visits to the UK, cooking at home is clearly going to be reduced to what is microwaveable. England’s favourite food – tikka masala, not fish and chips – works well with sides of rice and steamed veggies. Butter chicken is as good as you can get in an Indian restaurant. But one dish stands head and shoulders above the rest: Cumberland fish pie. It’s rich and creamy, packed with fish and a cheese sauce, and topped with mashed potatoes and golden bread crumbs. We have this fish pie several times and slightly prefer the one from M&S over the offering from Sainsbury’s.

Back in Canada, I don’t even bother to look for it in the supermarket, but I do go online to try and find a good recipe. Nothing. Nada. Zilch. According to the Internet, Cumberland pie is interchangeable with shepherd’s pie or cottage pie, a minced meat and veggie pie with a mashed potato topping. Well, I beg to differ. So after some experiments in the kitchen, here’s my version (and apparently the ONLY version) of this tasty English treat. 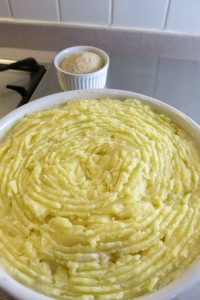 Now to sprinkle on the breadcrumbs

For the mashed potatoes

Instructions
Step 1: Make the mashed potatoes.
Cook the potatoes in a saucepan of lightly salted boiling water for 15-20 minutes, until tender. Drain well, return to the pan and mash with the butter and milk until smooth. Season well and set aside.

Step 2: Make the filling.
Put the milk and bay leaf in a wide, deep frying pan over a medium heat. Bring just to simmering point, then add the salmon, haddock and cod (halve to fit in the pan, if necessary). Poach for 5 minutes, then transfer to a baking dish using a slotted spoon. When cool enough to handle, flake or cut the fish into bite-size pieces. (This is a good time to check for any errant bones or pieces of skin you missed earlier.) Strain the infused milk into a jug, discarding the bay leaf.

Step 3: Make the sauce.
Preheat the oven to 200°C (390°F). Melt the butter in a saucepan over a medium heat. Stir in the flour and cook for 1 minute. Gradually stir in the warm infused milk and bring just to the boil, stirring constantly. Simmer for a few minutes until thickened. Remove from the heat and stir in the mustard and grated cheese until it melts. Return to the heat if necessary. Season well.

Step 4: Assemble and bake.
Gently mix the sauce with the fish in the baking dish. Top with the mashed potato. You can just spoon it on and make furrows with the back of a fork, or you can get fancy and pipe it on using a piping bag and a wide star shaped nozzle. Sprinkle with breadcrumbs all over the topping. Place the pie on a baking sheet and cook in the oven for about 35 minutes or until turning golden and bubbling hot throughout.

Tip
To freeze and reheat: You can freeze the pie after assembling and before cooking, covered, for up to 1 month. Thaw in the fridge for 24 hours or until it is completely defrosted, then bring up to room temperature. Preheat the oven to 200°C (390°F) and cook for 50 minutes until piping hot throughout.

POSTSCRIPT: Fast forward a year to May 2015, at The Devonshire Arms at Pilsley, Derbyshire, not be confused with The Devonshire Arms at Beeley, a mere three miles away, but still on the Duke of Devonshire’s vast Chatsworth estate, Diane is served an excellent fish pie. I decline to taste test it as it has shrimp within. The Duke’s version is covered with grated Cheddar cheese and makes a delicious difference. As soon as I get back from this road trip and into a functioning kitchen, I’ll post the Devonshire version (sans shrimp).

If you enjoy this recipe, and please let me know how it turns out, you might also like my SEAFOOD PIE, originally published on June 28, 2014.