ART AND WAR IN MIAMI

We missed Art Basle in Basle last year and, by only a day, we miss Art Basle in Miami Beach. Such is life, but if one knows where to look, there’s plenty of art to discover in the Greater Miami Area. We need a good dose of culture for balance during an otherwise hedonistic getaway from Toronto’s cold and snow.

The Wolfsonian in Miami Beach is top of our to-do list and we are not disappointed. Just two blocks from lively Ocean Drive in South Beach, the museum presents a startling spectacle in pink and black geometric designs. Miami Beach artist Michelle Weinberg has interpreted the camouflage patterns used on navy vessels during WWI in a temporary mural to introduce the wider war themed exhibit within. The dark grey and Mountbatten pink ‘dazzle’ technique will adorn the exterior walls until mid-April 2015.

I cannot imagine how the odd pink came to be associated with Mountbatten, but it is a curiously frivolous colour to associate with the carnage illustrated within the museum. More on that later.

At The Fairchild Tropical Botanic Garden south along US Highway 1 in Coral Gables, the Chihuly installation is at the opposite end of the emotional spectrum. It’s filled with colour and light and fun. To see the magnitude of the 83 acre site, we take a comfortable tram tour with an expert guide on the mike. He’s one of 700 volunteers who keep Fairchild humming, on a day which sees the parking lot overflowing into lowland fields, adjacent to the largest of 12 manmade lakes, one with a resident croc.

After our tram tour we walk back to the Chihuly pieces we liked the best. Some of them are spectacular. Some extraordinary. All beautiful. In one of the principal lakes a boat filled with blown glass spheres seems ready to launch into the air. Close by a series of floats are scattered amongst the water lilies. In the background, across the water, a tower of blown glass spirals fancifully skyward. On our walk we come across a forest of purple glass stalks in the Madagascar spiny cactus forest, one of the botanical areas which highlight endangered plant species. 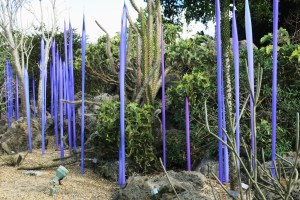 Neodymium Reeds, 2014, by Dale Chihuly, exhibited in the Spiny Forest of Madagascar

By a small waterfall and pond a towering lime-coloured glass pillar of light is displayed. In the pond huge glass blown spheres reflect in the wind rippled water. On a point of land a mass of tall pink spikes look like a flock of flamingoes on the move, although, as Chihuly says in a video screening in the gift shop, that’s too much of a literal interpretation for him to feel comfortable.

Dale Chihuly has created an avant-garde niche for himself in which he is pre-eminent. He has a studio in Washington State and travels to glass factories in Finland, Ireland and Mexico to create his sculptures. For once we have timed our visit right, as his show opened only a couple of days before we arrived in December and runs through May, 2015. In the gift shop a small Chihuly blown glass bowl goes for about $US6,500. I can’t imagine the value of some of his monster installations.

There’s almost too much Chihuly glass on display to appreciate the honest labour needed to create this amazing living repository of tropical plants. One mustn’t forget that the exotic trees, lush rain forest and endangered palms are what Fairchild is all about. The place was founded by a philanthropist in 1938 and named for the botanist Dr. David Fairchild, who introduced many species to America, including soybeans, pistachios, mangos, dates and flowering cherries. Part of the site is well situated on an ancient coral hammock, or slight rise, and the balance is the lowland area where the lakes are all that is left of the drained mangrove swamp. It’s ironic that The Fairchild, having destroyed 50 acres or so of swamp, are now in the forefront of the fight to preserve Florida’s mangroves.

Poster art from the Great War

The destruction portrayed in the Wolfsonian exhibition is of an entirely different type. We know what we are in for when we walk into the lobby across a carpet of poppies. It’s not quite ‘Blood Swept Lands and Seas of Red’ which saw thousands of poppies spill around the Tower of London this summer and fall, but it sets the tone. The top two floors of the old Washington Storage Company building are devoted to temporary exhibitions, this one titled Myth and Machine: The First World War in Visual Culture. You can tell it’s a serious show by the length of the title. Most of the images on display are artists’ attempts to make something of the war, by giving the battles heroic meaning, by sanitizing its horrors or memorializing its sacrifices.

Now that I’m a member of The Great War Flying Museum, I’m naturally drawn to images of aerial combat, impossible to photograph or film with the primitive equipment of 1914, but easy for artists to imagine. And they do so with chilling accuracy and in their art is beauty too. The striking play of light and dark in dogfights among the clouds, whether in full colour paintings or black and white woodcuts, adds movement to briefly glimpsed moments. In one amusing sketch for a ceiling mural, the artist has shown a biplane flying across the sky, while a crowd of folks look up at it. Only thing is, the plane is seen from the top so it must be flying up-side-down. In the final rendering the artist apparently got the plane the right way up.

Illustration from a French WWI folio

The exhibit shows lots of pictures of other war machines as well as planes. Several galleries show the human side of the conflict, ghastly pictures of anonymous masses of soldiers cheerfully tramping off to war or officers on horseback reviewing their cannon fodder before sending them ‘over the top.’ Most of the works are on paper, with some oil paintings and watercolours and a few sculptures.

Entrepreneur and philanthropist Mitchell Wolfson Jr., who started the collection in the 1970s and amassed several hundred thousand works before donating the lot, and the storage building he eventually bought to hold it all, to FIU – Florida International University – seems to have had an endless ability to pick up wartime ephemera.

The collection includes works from the US, of course, but also British, German and Italian sources. It all looks much the same but it’s all fascinating stuff and a pity the show won’t be touring after this installation.