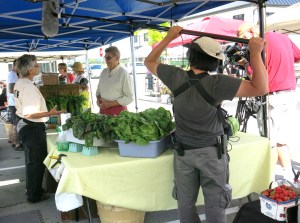 DIARY: Travelling through the back roads of the Ontario countryside to check out the farm to table movement, for another episode of Escapes with Nigel.

It was a brisk spring-like day in early summer when we first drove up to the East Gwillimbury Farmers’ Market, just north of Newmarket, Ontario.  We were on a search for an interesting little outdoor farmers’ market to feature on the second season of my television series. We’d been very successful with an indoor market during the winter taping for the first season when we visited Barrie. The vendors were interesting and varied and the Barrie Farmers’ Market has been going a long time at City Hall. What intrigued me about the East Gwillimbury story was that the market was relatively new, but in the middle of farm country.

The location was a bit of a surprise. I’d expected something more rural on this stretch of Yonge Street just south of Holland Marsh, but developers have moved in and paved over the farm land, so the market is being held on a brand new parking lot in a brand new plaza, having relocated in 2014 from nearby Sharon. We met some interesting people we knew instinctively would make good interviews for the show. One farmer was Leslie Forsythe who sold me some fresh rhubarb, which I featured on my rhubarb crumble blog in June. Another was Lisa Cooper, who invited me to visit their farm in nearby Zephyr.

By July, our shoots were under way and in the manner of these things we filmed the show out of order and on different days, which meant not only keeping continuity of clothing under control, but also differentiating between what we would have already talked about, but hadn’t, and what we had already actually shot, but would appear later in the episode. I always did have a hard time with past participles and pluperfect subjunctives, but somehow my brilliant director and editor pulled it all together in the right order.

On the appointed afternoon, another scorching hot day we yearn for in the cold winter months, we pulled our production caravan into the Cooper’s farm. Steve showed me around their mixed garden and animal farm, explaining how weeds and pests are managed with very little use of chemicals, by having trained spotters checking out all the veggies as they are growing and reporting on bug and disease sightings before they become problems. He introduced me to his big black Berkshire hogs, a couple of sows and their many piglets, who were much more interested in rooting for grubs than me, fortunately.

Selfie with Lisa Burrows and the cake

Later, Lisa brought out a box for the weekly Community Supported Agriculture (CSA) delivery. I contributed a couple of pickling cucumbers and tasted the fresh strawberries, which were like candy, while she explained how the system worked. Consumers, who either have the boxes delivered to their homes, or pick them up at the market, pay for the season’s worth of boxes in advance and get a guaranteed box of mixed seasonal fruits and veggies each week in return. The cash advance allows the farmer to buy seeds and plant crops without having to borrow money from the bank and to grow for a known market. The consumer gets the benefit of really fresh food, picked and delivered the same day.

We caught up again with Lisa a few days later at the farmers’ market, where her boxes were flying off her stand. We saw some old friends from our previous visit and met some new folks, including Lisa Burrows who baked an Escapes with Nigel cake (absolutely delicious), which she showed off at her Pat-a-Cake stand. Liz Gorzo offered us a selection of greens grown in the Holland Marsh, just to the north of the market, and in return we spelled her name wrong on the credits (sorry Liz) and we picked up fresh baked goods from Marjo Niemi, one of the market’s founders. 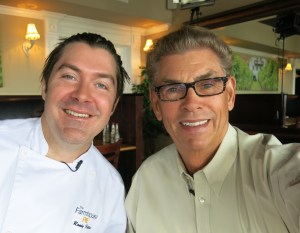 At The Farmhouse with Chef Randy Feltis

Finally we travelled back to Barrie, where we visited with chef Randy Feltis, who has three restaurants in the town. At The Farmhouse Restaurant, we had a very early start as chef had a charity golf game to attend (I guess he has his priorities right) but we had a lot of fun prepping appetisers for lunch and chatting about farm to table and 100k food.

I hope you enjoy watching the show as much as we had eating our way through it.

Watch the Escape to East Gwillimbury episode on Bell Local, Channel 1217, if you subscribe to Bell Fibe, or on our website. The featured image shows farmer Steve Cooper in his garlic patch.