An Egyptian courtyard and fountain

I’m looking at an astrolabe from 14th Century Spain. The excellent quality of the Latin inscriptions, our guide tells us, shows an inscriber trained in the Western tradition. Later inscriptions have been added in Arabic, and still later in Hebrew. This exquisite little navigation instrument shows that, around the Mediterranean and in that century at least, Christians and Muslims and Jews mixed quite happily in commerce.

The Islamic world’s influence on the science, culture and art of the Christian world is probably greater than the reverse. Another precious artifact is an 11th Century encyclopedia of medical knowledge, inscribed in Arabic on vellum, and one of two volumes in the collections. It was translated into Arabic in Spain in the 13th Century and, until the 18th Century, became the go-to reference book for the Western medical profession.

In the suburban wilderness, just north of Toronto’s mid-town and not far from the long-established Science Centre, His Highness the Aga Khan has built a jewel of a museum for his extensive collections, separated by a small park from a new Ismaili Centre, itself a modern architectural landmark. In the spring, evergreens will be unwrapped from their winter sacking and the reflecting pools filled, but at the moment the site is a bit stark, not the least because the museum is an unadorned white sugar cube of a building. Inside, symbols of Islam dominate with repetitive designs replicating ancient carved screens around a central courtyard, where the tiles on the floor, laid in a traditional pattern, include semi-precious lapis lazuli.

A tapestry made from gold pins

At the entrance to the galleries a large tapestry of animals and plants has been commissioned. It appears to have been sewn with tiny gold stitches, but closer inspection reveals it is really made with tens of thousands of gold pins, stuck through the fabric, the heads creating the images. It is just the first of many wonders to come.

The museum experience starts with the usual video, this one showing vast close-ups of jewels, ceramics and illustrated manuscripts we will see later under glass. Stepping into the main gallery, one is confronted with cases filled with beautiful and ancient books, many versions of the Muslim’s holy book, the Qur’an, which I’ve always anglicised as the Koran. Some of these masterpieces of calligraphy are truly beautiful and all are intriguing. Other works are poetry from many places and eras, miniatures wonderfully illustrated, including a 13th Century version of A Thousand and One Nights. 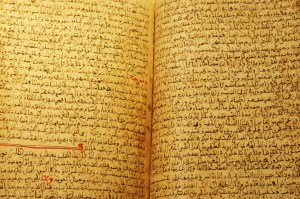 A Thousand and One Nights from Arab Spain, 1235 CE

My eye is drawn to a dry fountain, surrounded by its original tiles, from an Egyptian courtyard, where the fountain kept the wealthy homeowners cool in the heat of summer. Curiously, the decorations around the fountain have six-sides stars. Is there some religious significance here, or is it just decorative art. The latter, our guide assures us, and at only $10 more than the modest entry fee, the guided tour is well worth the extra. 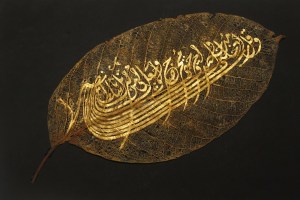 At the other end of the scale is a perfectly preserved leaf, inscribed with an Arabic poem, the gold lettering arranged to look like a boat with a rower. There’s a large 16th Century Safavid carpet, from a very wealthy man’s palace, with all sorts of birds and beasts arranged to represent Paradise. An ivory drinking vessel, carved with sinuous serpents and possibly, but I can’t be sure, desert hares, has been adorned with silver added in Victorian England.

A pendant showing the Order of the Lion, glitters with diamonds, rubies and garnets. And everywhere there are ceramics covered with stylized lettering, bowls galore and tiles and other architectural details made of fritware, also known as faïence, more popular in the Middle East than porcelain, where the requisite kaolin was not available.

The exhibits have been selected from the permanent collections of the Aga Khan, world leader of Ismaili Muslims, and although items have been seen in various museums around the world, this is the first time the entire trove has been collected in one place. All the pieces seem to have survived the journey from storage in Geneva. The museum was supposed to have been built in London, but for various obscure reasons which our guide is unwilling to relate, was eventually erected, as a cost of about $300 million, in Toronto. Their loss is our gain.

Gold, diamonds, rubies and garnets on an Order of the Lion. France 1840-60

Upstairs temporary exhibitions provide a reason to return from time to time. The Lost Dhow, with literally thousands and thousands of perfectly preserved artifacts from a 9th Century shipwreck, runs through April and is well worth a visit.

As I wander from one exhibit to the next, I ponder on the contradictions of the news of more atrocities from the world of Islam. Here beauty and peace; there terror and horror.

Those of us who live in the Western world cannot help but be shocked by the latest jihadist violence. We cannot afford to be politically correct and ignore the fact that these acts are being committed by people who are, yes, Muslims. Politician after politician claiming that people who punish other people by killing them for blaspheming Islam, has ‘nothing to do with Islam’ are just being cowardly. As Douglas Murray says in a recent edition of The Spectator: ‘The violence of the Islamists is, truthfully, only to do with Islam: the worst version of Islam, certainly, but Islam nonetheless.’

The President of Egypt, Abdel Fattah al-Sisi, has bravely spoken out: ‘Religious discourse is the greatest battle and challenge facing (us). We need a modern comprehensive understanding of the religion of Islam,’ rather than ‘relying on a discourse that has not changed in 800 years.’

In her remarks at the official opening last September, The Honourable Shelly Glover, Minister of Canadian Heritage and Official Languages, said: ‘… the Museum will reach out to speak to Muslims and to non-Muslims alike about the peace, creativity, beauty and pluralism of Muslim history and in these tumultuous times, those values are needed more than ever.’ I concur.