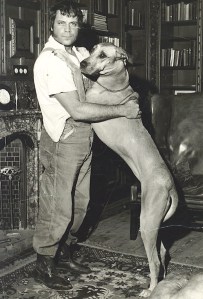 Oliver loved the country life and his dogs

Today, February 13, 2015, would have been the 77th birthday of my late cousin, the actor Oliver Reed, famed for his tough-guy roles and his hard-drinking ways. Sadly, on May 2, 1999, at the age of 61, he succumbed to a heart attack on the floor of a tavern on the island of Malta, in the arms of his wife. While on a hiatus from the gruelling shoot for Ridley Scott’s Gladiator, Ollie had fallen off his self-imposed wagon and taken on a bunch of sailors in a drinking game. He won the contest, but lost his life-long battle against alcohol. 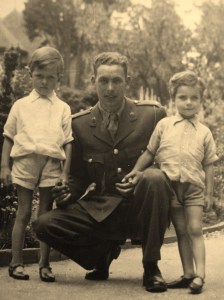 David and Oliver with my father before his departure for Singapore, the last we were to see of him for four long years

Ollie was born in our hometown of Wimbledon, also known for tennis, which took place just down the road from our granny’s house, where we could sit on a summer afternoon and hear the sound of the crowd at Centre Court. His mother was my Aunt Marcia, who led a turbulent life herself, with several husbands along the way. As a result Ollie, and his elder brother David, were often between parents and frequently stayed at our place, a rented cottage on the then private estate of Cannizaro. Being a few years older than me, they thought it great fun to tie me to a tree during pirate games, then abandon me, while they hid nearby to see how quickly panic would set in. I remember that early incident very well, so I can only assume it was truly traumatic. 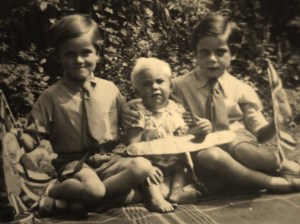 Equally traumatic was an occasion when I was staying with them, still a very small boy, at a rambling country house. In residence was their father Peter and their step-mother Kay, both of whom were very kind. Skylarking around in the vegetable garden, I put my foot through a cucumber frame and immediately started squirting copious amounts of claret. Ollie, not yet a toughie, passed out and it was David who read me a story, to distract from the application of stitches. I have the scar to this day. It goes half-way around my ankle. So went our childhood from scrape to scramble and with many happy memories of afternoons spent chasing around on Wimbledon Common. In those days kids were sent out after lunch to play and told not to come home until supper.

Many years later, my father had purchased a mews cottage off the Portobello Road, for use during home leave. While Dad was abroad for years at a time, in Benghazi, or Nairobi, or Johannesburg working as an ex-pat, the house stood empty. Ollie, just back from army service, was offered the place, with the caveat that he would have to look after me (or possibly just put up with me) during short holidays from boarding school. Ollie, who was at the time trying various jobs and attempting to break into modelling and film work, taught me some very interesting life lessons. On one occasion, he borrowed sixpence from me to buy a single razor blade from Boots, the chemist, so he could shave for an audition. He landed his first, non-speaking and uncredited part in a movie as a result, and often told the story of my role in starting his movie career. Ollie was already a hard-drinking chap and proposed that we head out from our mews for a beer at the Six Bells, Chelsea, a mere five-mile walk … via every pub on the way. The first one was The Portobello Star, the second was The Earl of Lonsdale and the third was The Windsor Castle. Then I forget. By the time we arrived at our destination hours later Ollie was in fine form and I could barely stand. I’m not sure he was a great influence on me, but I loved him like a brother. At 18, I went travelling and our paths crossed less often as he went from success to success.

I was heading for Canada on an assignment for BBC television, and stayed. Ollie was heading back from filming The Trap. Our planes passed in  the sky. We later met when he was in Toronto filming David Cronenberg’s The Brood. This was the occasion for more high jinks. We planned a family lunch in Yorkville, attended by my then-wife, her sister, my sister and myself. I got them settled down and left the party at a few minutes before noon to direct a live daily television chat show at a nearby CBC studio. Returning just after one, the show over, I found they had not yet eaten but had consumed several bottles of wine. I went in search of Ollie, who had disappeared to the loo, but missed him somehow. In the men’s room I found his clothes and fearing the worst rushed back to the table, where he was sitting calmly drinking a glass of wine, buck naked. The maitre d’, who clearly knew his stuff, had put screens around our table. We got Ollie to put on his shorts and shirt before we left, explaining that it was snowing outside, but he refused the rest of his clothes. We got his shoes on but his socks had vanished. The staff eventually saw us off with relief, though he paid the bill and tipped them with a handful of hundred-dollar bills. On the way back to the hotel, just steps away, we passed a police car. The officers completely ignored us staggering down the sidewalk, arm in arm. 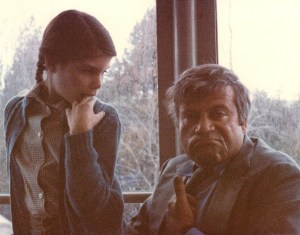 Oliver and Sarah at the Millcroft Inn

There are two follow-ups to this story. The first is that I have had exaggerated versions of the  incident recounted to me countless times by people who claim to have been there. Sorry guys, none of you were.

The second is a stunt we pulled after we were back in the hotel, sniggering like schoolboys. In a mischievous mood, I phoned the late Sid Adilman, then entertainment editor of The Star. Sid loved a scoop and I told him a much fictionalized account of our lunch, leaving out the detail that Ollie had put some clothes on for the walk back to the hotel, and ending with the fabrication that Ollie had been bundled into the police car, which had actually ignored us. Sid checked the story out with the police, who refused to confirm or deny that Ollie was incarcerated, which to a reporter hot on the trail of a story, meant he had indeed been arrested. Sid got the front page the next day and the story went round the world. The only interview Ollie gave was on The Bob McLean Show the next morning, myself directing. When Bob asked him why he’d done it, Ollie replied: “A few weeks ago I was in Barbados walking down the beach in my overcoat. What’s the difference?” 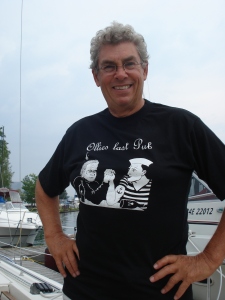 A not very tasteful souvenir – but at least he’s remembered

Ollie came to Toronto a few more times and we always had a splendid reunion. He came with Jacquie and his daughter Sarah, who as a young girl bore an amazing resemblance to my daughter Rebecca. He came with his new wife Josephine, whom we immediately liked. A hot summer afternoon in the garden of our house was spent chasing baby grass snakes. Our cat had found a nest and insisted on bringing Ollie souvenirs. I received numerous late night calls from Ollie over the years, usually pretending to be someone else with an absurd story. I recognized his tricks, but the give-away was always some partner in crime giggling in the background.

I phoned Ollie the year before he died, to wish him a happy birthday. Josephine said he was out walking the dogs, but would pass on my good wishes. I never saw him in life again. I watched Gladiator alone in a cinema in San Francisco. It was the best role of his life and I shed a silent tear when the credits rolled. The film was dedicated to his memory. 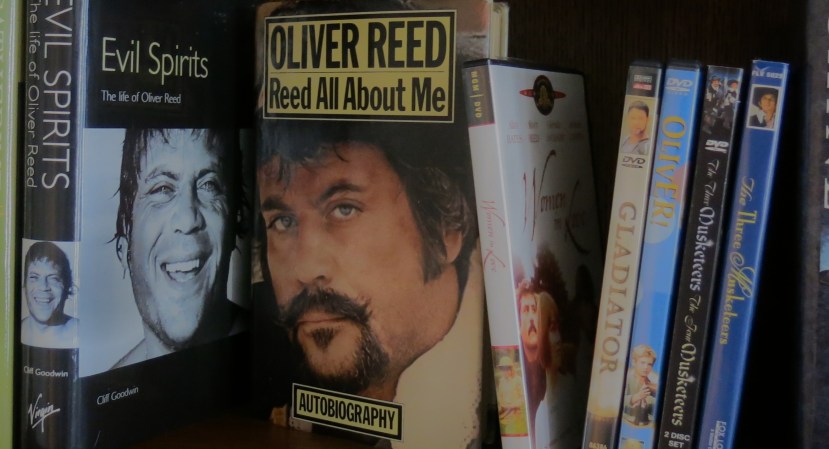 The featured image shows books and videos featuring Oliver in my library.

This article was originally posted in 2013 and has been slightly edited.