WIND IN THE WILLOWS 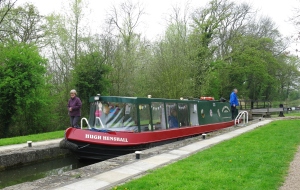 Yorkshire narrowboat in the lock

Spring hasn’t decided whether it has really arrived in South Yorkshire. The daffodils brighten the narrow country lanes, bluebells carpet the woods, and wild plum and crab apple trees are heavy with pink and white blossom, but the weather is still cool and cloudy. In our favourite local pub, The Parish Oven, I’ve been talking to a retired British Waterways worker, Trevor “Fred” Froggat, who spent most of his career working on the restoration of the Chesterfield Canal. BW is now gone, to become a charity called the Canal and River Trust in 2012. I can imagine Fred on the riverbank, like a character from “Wind in the Willows” happily working away in the reeds to dig out the overgrown canal. At several places along the canal weeping willows hang right over the water, brushing the tops of the narrow boats as they pass slowly by. 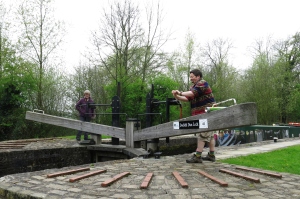 Fred has some good stories. I especially like the one about a tour operator on the canal telling tourists the history of Albert’s Dock, named in the Victorian era after Prince Albert. ‘Noooo,’ cries Fred, ‘It were named after my chum Albert, who always used to moor his narrow boat there.’

The Chesterfield Canal was built under the direction of Chief Engineer Hugh Henshall and opened in 1777. It ran 46 miles between Chesterfield and the River Trent at West Stockwith, through the towns of Worksop and Retford and villages with names like Killamarsh, Harthill, Thorpe Salvin and Shireoaks, but for long stretches the narrow boats travelled through pristine countryside. The canal was known locally as Cuckoo Dyke, and the narrow boats are called cuckoos, so it’s only reasonable that the restored footpath is called Cuckoo Way. No reason for the name has turned up in my research. The canal was built to transport minerals out of Derbyshire and bring back consumables on the return journey. Stone for the construction of the British Houses of Parliament was quarried nearby and carried down the canal to larger barges on the river.

By 1849 a railway line was opened along much of the route and the canal began to fall into disuse, with the stretch from Chesterfield to Worksop being abandoned by 1908, when mine subsidence closed a long tunnel. Parts of this section have been filled in and redeveloped creating problems for those who are restoring the canal. However, restoration does continue apace and we’ve been invited to take a short trip on the Chesterfield Canal Trust’s new narrowboat, Hugh Henshall, and see one of the restored locks.

Skipper Dave Morris has his son Daniel along as crew, with some other volunteers, and we join the boat at the appropriately named Lock Keeper pub on the fringes of Worksop. As he edges the cuckoo into the lock, one can see that the craft is even narrower that a traditional canal boat. The lock is seven feet wide, he tells me, and the boat has a beam of six feet eight inches, leaving a gap of only two inches on each side. Not much room for error there.

Skipper Dave squeezes the narrow boat through the lock

The passengers board and while two crew members work the lock, Dave steers the boat from the stern. The water drops and the dripping green stones of the lock wall rise up above us. Then we are out of the narrow cut, under a bridge low enough for us to have to duck and into a long quiet reach. The skipper hands the tiller to one of the party who seems to be enjoying the experience, until another narrow boat approaches coming upstream. Dave sees the concern in her face and kindly takes back the helm. But the canal is wider here and the two cuckoos pass easily. The other boat is one of two hire boats on the canal. Moored along the towpath side of the canal, the other bank left in a natural state, is the occasional narrow boat, privately owned, restored and looking very clean and handsome this early in the season, before inevitable scrapes with the locks take their toll. 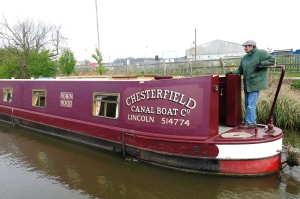 Another narrow boat passing by

Some of our route is bucolic, with fields spreading out on each side of us, but other stretches are reminders of the original industrial use of the canal. Old and disused works line the bank. On Cuckoo Way anglers run their long new-fangled rods out across the water. If they’re Eastern European it’s catch and eat, says one of the crew, but it’s supposed to be catch and release. Signs in several Cyrillic languages remind that eating the fish is not allowed, but the recent immigrants ignore the notices in favour of a good fry up. After a short toot from our horn, the rods are pulled in just in time.

The next lock we enter has been well restored and widened by six inches, though it’s hard to see evidence of the work. That’s because they took down the original wall, dug out behind it and put the old stones back, says my guide. Regardless, it’s an easier lock to enter, slightly. Dave’s son has run ahead of us and opened the lock gates to make our entry smoother, and after they are closed behind us and the leading sluices opened so the lock can drain down to the lower level, he sprints off again with the energy of a teenager, to the next spot.

The skipper asks me if I’d like to steer and of course I take up the challenge. ‘Steer small,’ he says, and as a sailor, I understand what he means. The boat responds well under my hand and apparently I’m doing well as he hardly has to correct me after the first few moments. A lock looms around the corner. ‘Care to take her in?’ he asks. ‘Sure,’ I reply, sounding more confident than I feel. Fortunately, most of the passengers, including Diane, are below listening to a talk on the history of the canal. ‘Watch out for the wash from the overflow,’ the skipper warns, ‘Line up the side of the hull with the wall.’ Then we are in the lock, the walls towering over us, and the two inch clearance seeming very tight. Amazingly, I put the forty-foot boat into the slot without touching. ‘That was very, very well done,’ says Dave. I’ll treasure that second ‘very’ for a long time.

When next we come back to England, I’m going to join the trust and learn how to pilot one of these narrow boats. It might drive Diane cuckoo, but at least I’ll be able to get a cuckoo in and out of a lock without scraping the paint.

This article was originally published on May 3, 2014