Diary: We visit Chatsworth, Derbyshire’s largest stately home, which has had all its scaffolding removed since we were last here and is now looking much better for the face lift, and discover a surprising jewel of a stone, unique to the county.

Touring the rooms we turn up an interesting item. On display in the formal dining room case is a beautiful and intriguing purple bowl, flanked by two vases, yellow with purple stripes. They are carved out of what I would call some type of quartz, but reading the descriptive label it turns out to be fluorite, of a particular type known as Blue John. So Blue John is not blue and when I enquire about the name, I’m told no one really knows where it came from but the most popular explanation is that it is a derivation of the French bleu-jaune, meaning blue-yellow.

Diane, who used to scoot around the Derbyshire Peak District in her first sports car, a bug-eyed Austin Healey Sprite, and knows the area like the back of her hand, remarks that we can take a side trip to the mine on our way back to the cottage. The only Blue John mine in the world is in Castleton, just 15 miles away.

Tiny bowls on display at the mine

Off to Castleton we go and, after first stopping to fortify ourselves in one of the many pubs lining the main street, we ask about the caves and the famous local mine. The closest cave to our pub is Peak Cave, which seems as good a place an any to start. Climbing up the steep path behind the pub and then into a narrow, dark gorge, we find ourselves in a gigantic open cavern. Our guide is chatty. Prior to Queen Victoria’s visit the cave was known as the Devil’s Arse, on account of the flatulent noise made by retreating waters when the stream running through it drains after a big storm. She tells the assembled tour group about the former inhabitants of the cave, who operated a rope walk within. Being cave dwellers, they were known as troglodytes, among the last in Britain. We crouch low and duck-walk through a very low-ceilinged passage beside an underground stream, into another huge cave. This is the only man-dug element of the cave system and at one time the only way to get through here was by lying on one’s back in a wooden punt and being pulled through. Fortunately this claustrophobic experience is no longer necessary.

But there’s no Blue John here, so after the tour we go back to the village and visit a friendly little shop, one of many selling jewellery made from the stone. I buy a pair of charming oval silver cuff links, made right on the premises. They advise me that the best place to see Blue John is in the Treak Cliff Cavern.

A £1 million pillar of Blue John holds up the roof

Treak Cliff is a Site of Special Scientific Interest (SSSI) and by agreement the semi-precious stones in the public areas of the cavern are no longer mined. The half-ton a year they do take out is from areas closed to our view, including a rich vein hidden for 68 years and only re-discovered last year. All the stone stays in the Castleton area to be made into jewellery, and in the case of the larger chunks, crafted into bowls and vases, such as I’ve seen on display at Chatsworth and around the village. We’re already out of puff climbing up the steep path from the parking lot to the mine entrance, by now buffeted by blustery winds and a thin drizzle that make the steps particularly slippery. Fat sheep and their newly born lambs cling to the precipitous grassy slope. There’s only a wait of a few minutes before the next tour of the mine sets off, but it allows us time to get our breath back. 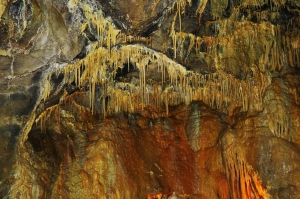 We are led inside a gloomy low tunnel by Jack, our friendly young guide. This is the original passageway dug by the mine’s discoverer in about 1745, where he was probably looking for lead deposits known to abound locally. Unfortunately he found no lead, but he did discover Blue John which quickly became a fashionable decorative stone used, for instance, in tiles around fireplaces. By the time of the World War I, the mineral was a vital element in steel making and much wonderful jewellery quality stone was destroyed in the furnaces of nearby Sheffield. Other natural caverns with spectacular deposits of flowstone, stalactites and stalagmites were discovered in 1926 and the mine was closed until re-opened to the public in 1935. The passageways open up into a combination of worked out mines and natural caverns. In one we see clear evidence of the Blue John veins in the wall. One spectacular column, worth about £1 million, Jack says, can’t be extracted because it’s holding the ceiling up. 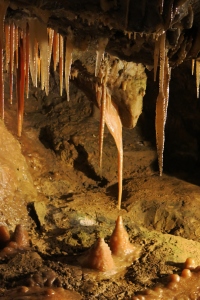 The Stork stalagmite and stalactite formation

We also admire rocks with strange fossils embedded in them, creatures from more than 300 million years ago, when all this area was sea bed. We climb more damp, slippery steps, the roof is almost continuously dripping water on us, and finally we come into the first of several caves with amazing examples of the strange limestone shapes which run down the cave walls, drip from the ceilings and rise from the floors. The most famous formation sort of looks like a stork, the stalactite growing down from the ceiling seems ready to touch the stalagmite coming up from the cave floor, but apparently it will be a thousand years before they touch, Jack says. No sense in hanging around waiting for something to happen then.

The tour spits us out much higher up the hill than the entrance. It has seemed a big climb inside, but the reality is even greater. We’re almost at the crest. We stand overlooking the wild and rocky Derbyshire moors, the bucolic green farm lands nestling in the valley below. The sun has finally peeked through. The Bull’s Head pub beckons.

This article was originally published on April 26, 2014.