DODGING THE BIG ONE

Last week the light of my life nearly went out. In just a blink her life could have been extinguished. It came so close to being the end that it makes one realise how fragile life really is.

Diane’s father died of a massive heart attack when he was about the age she is now. So we should have been more prepared. We should have taken notice when we were rushing around the tourist spots in Amsterdam, or visiting family in England, and she was much more tired than usual, that something might be wrong. Back home in Toronto from our trip to Europe, Diane didn’t seem her usual cheerful self. I was going to the island to get my boat ready for the sailing season and she had planned to drive me down early and join me later in the afternoon when all the chores had been done. As it turned out she was too tired to get up early and came down later on the bus. While walking along Queen’s Quay, she had to stop several times to rest and actually clung onto a construction fence to hold herself up. Perhaps it was just as well she missed the hourly tender ride to the island and had to wait for the next one, as it meant she had time to rest. 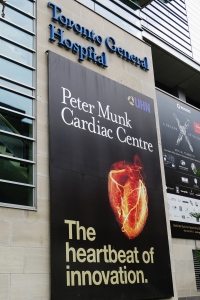 I wish we had listened to her body trying to tell us she was sick and had taken her to emergency right then. She sat quietly in the bar, the English cure-all cup of tea to hand, until it was time for the tender to go back to the mainland. “I’m tough. I’m from Yorkshire, you know,” she said. I wish she hadn’t been so tough. In fact, she went early to bed with pains in her chest which she convinced herself were just an anxiety attack. Sunday morning, it was clear she was not well and I drove her to emergency at Toronto General Hospital. I wish I had called an ambulance, but we were still in the denial stage.

By mid-afternoon tests made it clear she had had a ‘fairly severe’ heart attack (probably 24 hours before when she was struggling along Queen’s Quay). Later in the afternoon a bed became available in the Coronary Intensive Care Unit and she was moved from emergency up to the Peter Munk Cardiac Centre. I knew she was in good hands. 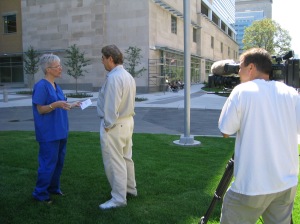 Years ago, when I was making videos for a living, I was asked by the University Health Network Chairman Tony Fell, if I would make some videos about various things going on at the Toronto General Hospital, Princess Margaret Hospital and Toronto Western Hospital. Chairman Fell, whose family name is all over various parts of the hospitals, is such a well known philanthropist that I felt obliged to offer my services pro bono as a small contribution. It was a fascinating, once in a lifetime assignment. As it turned out, the SARS epidemic was in full force and we ended up documenting some of the stories around the various hospitals’ heroic efforts to conquer the virus. One late afternoon, just as we’d finished shooting a brain operation at Toronto Western, the lights in the city all went out at once. Half the north eastern US and most of Ontario was affected by the blackout. As we were there, we covered how the hospitals rose to the challenges on that occasion too.

The most interesting part of the project was being invited to shoot during heart surgery. After an intense briefing by the PR people on what we could and could not do in the operating theatre, we were introduced to the surgeon. “If you feel sick,” he said, not entirely joking, “Don’t throw up on the patient.” In OR we were scrubbed within an inch of our lives and the cameraman, soundman and I dressed in full surgical greens. “Don’t touch anything blue,” warned the senior nurse. “That’s sterile.” We hung back as the operation got underway, but as he was delicately stitching a replacement valve into the patient’s heart, the surgeon asked the cameraman if he could see what he was doing. “Get this man a ladder,” he commanded. And the cameraman spent the rest of the procedure looking right over the surgeon’s shoulder as he worked miracles. The footage was brilliant and the patient, I later learned, went on to full recovery with a replacement valve pumping away in their heart. 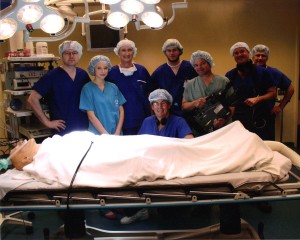 So having seen true miracles at first hand on these very premises, I was confident Diane would get outstanding treatment. And she did. An angioplasty was performed the next morning and a stent inserted to open a 90 per cent blocked artery. Within hours she was feeling better and within two days she was so much improved she came home. Now the trick will be to get her to actually stay still and take some rest while she recovers.

Our thanks to all those at Toronto General Hospital Emergency, Peter Munk Cardiac Centre and Coronary Intensive Care Unit, who worked tirelessly and with such good humour, to help Diane through her heart attack and recovery, especially Dr. Peter Seidelin and Dr. Sharma Divyesh and all those in CICU.