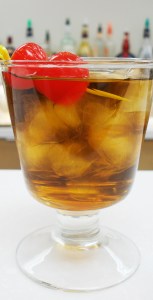 RECIPES: Mojito and Aperol spritz discovered during our travels.

DIARY: Memories of Africa and ‘sundowners’ on the verandah.

Sweet-tinis are out and complex cocktails are in according a recent story out of New York. I don’t know – last week in a bar off Bay Street, in Toronto’s financial centre, I heard a young trader type order a Manhattan, that mixture of sweet vermouth, bourbon and bitters with a Maraschino cherry to top it off. Never tried one myself although I do know how to make it. I’m a Scotch on the rocks chap. But I did pay $16 for something called a Gentleman’s Portion the other day in a cocktail establishment in Toronto. It was the bartender’s take on my own (and my dad’s) nickname for a generous pouring of any type of booze, tarted up into a complex mess with smoke and pine flavoured bitters. Ugh. What a waste of good Scotch. 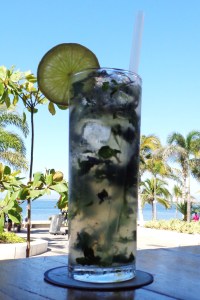 Mojito – escape from the winter in Puerto Vallarta

When I was a young man living with my family just south of the Equator in East Africa, the cocktail ceremony was identical every evening. Just before the sun set at pretty much the same time every night of the year, about six o’clock, our house boy would wheel the drinks cart out onto the verandah of our Out of Africa home. (On an etymological note, ‘verandah’ derives from a Hindi word for porch, and the whole ceremony reeks of the old Raj in India. Even calling the aged servant ‘boy’ sounds strange in this post-Colonial era, but that’s what they were all called back then.) ‘Sundowners’ were served to the guests and family as we watched the sun set over the Great Rift Valley from our hill-top aerie, and the vast soda Lake Nakuru, home to millions of flamingoes. As the setting sun turned the waters of the lake to burnished gold, and the roosting flamingoes tucked their heads under their wings, showing their scarlet feathers to the sky and making the enormous flocks seem to flick the colour switch from white to intense pink in an instant, the adults quaffed their cocktails.

My own introduction to cocktails was a weak ‘chota peg’ — again a Hindi word, this one meaning a very small drink, usually of whisky and soda. Where the water was undrinkable in the colonies, the drop or two of whisky was supposed to kill off the bugs. On safari as a teen, like my dad, I grew accustomed to cleaning my teeth in whisky, rather than a mug of water teeming with who knows what.

“Boy, lete whisky na barafu, pese pese,” my boss, the editor of the local paper where I landed my first job, would shout in Swahili at a servant waiting about three feet behind him, meaning “bring me another whisky with ice, and be bloody quick about it, before I die of thirst.” At the Kenya Weekly News, the sundowner ceremony took place in the editor’s large office shortly after the paper had been put to bed for the night (that is, sent to the presses for printing). It seems it was mandatory for the editorial staff to attend. My taste for Scotch came early. 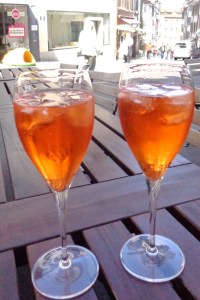 It would be years before I learned that there were drinks other than gin and tonic (G&T) and whisky and soda (Scotch was always whisky in the British Empire). The quinine in the tonic was thought to stave off malaria. Wine was intolerable in the heat, and beer was for the ‘other ranks’ as the officer class called them. Mum was a renegade and drank brandy and ginger ale, which was thought to be a bit French and sissified by the Brits. Later she switched to whisky, which at 97 she still enjoys.

My next two cocktails were vodka and orange juice (a screwdriver in North America), which girls in 60s London seemed to like, and Campari and soda, which I learned to enjoy on a BBC television junket to Milan. Then there was the bloody Mary, which was all the rage at Sunday brunch when I arrived in Canada. At the long defunct Forum of the Twelve Caesars restaurant in New York, I was introduced at 24 or so to the vodka martini, large, very dry, straight up, shaken not stirred, with a twist. Waiting for a table for a late lunch with a much older BBC colleague, I had two, and promptly fell off my bar stool. I was hooked. 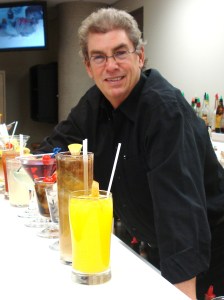 So that was my repertoire until much later in life, divorce papers fresh to hand, when I had in mind the idea that I would sail around the Caribbean in my small yacht, supporting myself by picking up occasional work for cash as a bartender. Someone had told me you could get work anywhere as an expert fixer of cocktails, and anyway I had seen Tom Cruise in the movie Cocktail and figured I could do just as well at a beach bar. I took myself off to a local bartending school and learned mixology. On exam day, each student was called out to make six random drinks from a list of over 100 we had studied. My fellow students were all many years younger, and I must have gotten lucky with the selection I was handed, but I passed top of the class with a 100 per cent grade.

Here’s a video link to a sailor who did make the trip south, and I envy him his freedom. For me, new love blossomed, so I didn’t go bartending in the Caribbean after all.

Don’t get me wrong. Fancy cocktails have their place, especially when one’s on holiday. Hard to beat a delicious mojito in Cuba or the new Italian rage, Aperol spritz, after a hot day sightseeing in Europe. But the real point of booze at the cocktail hour is to take the edge off a murderous day earning one’s crust and, as Ogden Nash put it, liquor is quicker. So real men, and women, take note. Take your booze straight … and take a taxi home.

A Cuban original and a favourite in Mexico
Ingredients
Instructions

Photos taken by Nigel on location at George Brown College bartending class, Puerto Vallarta, Mexico, and Basle, Switzerland.
These recipes were originally published on February 13, 2014, based on a story written earlier.