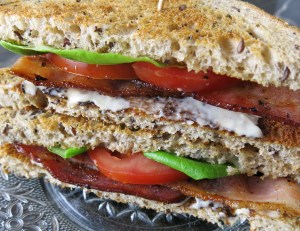 DIARY: The pros and cons of ethical food.

In my farm-to-the-table (FTT) story I touched lightly on the subject of food grown within 100k of the consumer as being much more wholesome. I wrote about farmers’ markets and the benefits of farm-fresh food that hasn’t travelled thousands of miles in refrigerated trucks. I discussed chefs who believes in the quality of simple, local, fresh food, seasonally presented, and often grown in their own backyard. All this stirs up more thoughts.

When I was a boy, one of my godmothers had a pig farm. My best friend Mike and I would spend a week-long holiday down in the country. The big fat sows had large indoor pens with a little door for their piglets to escape through if she turned over and threatened to squish one of them. As kids we were forbidden to go near the sows, but climbing into the piglets’ pen, with the litters of eight or more squealing wriggling little ones, kept us out of the farm hands’ way for hours on end. They were even more fun than puppies or kittens or even baby ducks, and there were all those around too. The ducks lived in the apple orchard beside the stream and we were encouraged to go out every morning and collect the big green duck eggs from the nesting boxes. These were idyllic childhood moments.

Now about suckling pig: every once in a while one would appear on the dinner table at some auspicious occasion. Roasted whole, the skin all crisped up and crunchy, the white flesh so tender it just fell off the bone, carved into thin slices by my godmother’s farmer husband at the end of the table, the best treat of all being the crackling, so delicious and fatty. For post-war kids still living in an era of rationing this was beyond luxury and who would miss one little piggy diverted from the farm’s quota? Even better was the bacon served crisp every breakfast along with a single, simply huge, fried duck egg and best of all, bread fried in bacon fat.

Was it hard to reconcile the little piggy playmates of yesterday with the suckling pig for dinner today, or the market-ready pigs rooting for apples in the orchard, with the crisp rashers of bacon? Not at all. It was the way of the world and we never gave it a second thought. 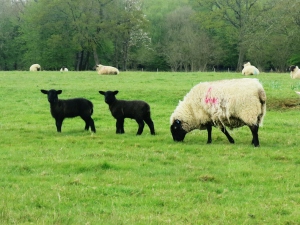 Diane however, growing up in sheep country on the borders of Derbyshire and Yorkshire, saw it differently. Down the winding lanes would be fields full of ewes and lambs, gambolling in the spring grass. Then one day the lambs would be separated from the ewes and put in a field across the lane. The bleating of the lambs and the cries of their mothers were heart rending to a little girl, who couldn’t understand why the lambs couldn’t be with their mummies.  But the next day all would be quiet. The lambs would be gone to market to be turned into lamb chops. The silence of the lambs. To this day Diane hasn’t touched lamb.

In the kitchen, at the dinner table and out at restaurants, we debate ethical food a lot. Ethical foodies rightly complain about shark’s fin soup. We were appalled to find, when staying in Costa Rica a couple of years ago, a country which touts eco-tourism, that authorities condone the completely illegal trade in shark fins. Celebrity chef Gordon Ramsay was attacked by armed bullies while we were there. He was filming for a documentary exposing the horrible excesses of shark finning. New York City has just banned shark’s fin soup. Toronto council refused to pass a similar proposal under pressure from the Chinese community, which saw the ban as an attack on their right to traditional food. Shame on them.

We had feisty arguments with our late friend, the restaurant critic Gina Mallet, who was an avowed carnivore, over the ethics of foie gras.

At a neighbourhood restaurant we discuss Provimi veal, which sounds exotic and sort of Italian, offered on their otherwise excellent menu. Actually it stands for proteins, vitamins and minerals in an animal feed. The formula, invented by the Dutch in 1927 and now made by America’s largest privately owned company, Cargill, replaces cows’ milk, getting the mums back into the milking herd faster and consigning all the little male calves to a short brutal existence. While most of the civilized world has banned calf crates — the UK in 1990, the EU by 2007 — only six US states have banned them and in Canada use is governed by “voluntary” regulations. In crates, and the now preferred hutches and stalls, the objective is to allow as little movement, and hence muscle development , as possible to create the tender meat diners desire. The designation “milk-fed” is guaranteed to make them completely anaemic, with constant diarrhea, just so we can eat white veal cutlet. If you must have veal, at least eat “grain-fed.”

On a weekend expedition we drive past a farm just outside Toronto, where there’s a field of small plastic hutches, used to pen calves in isolation. It reminds me of the Victorian prison in Lincoln Castle where prisoners went mad in isolation. The hutches seem no better than crates and we are appalled at the indifference of this farmer so callously showing his cruelty at the side of the road. Thinking farmers now keep their veal calves in open pens, where they can at least socialize, and lead some sort of life.

On any drive out into the countryside one can see poultry factory farms, where chickens are stacked in tiny cages laying identically sized white eggs before being shipped off to become hot wings, or deep fried breast and thighs. At the supermarket we could buy “free-run” eggs, which isn’t the same as free-range, but is better than nothing. We prefer to take our business elsewhere.

My personal ethic is governed by an edibles list where I think raising the food animal is cruel. Those I just won’t eat any more. And I also go along with herself, whose word is law (she who must be obeyed, in the words of Rumpole) and in the interests of a happy marriage. At the moment, having just joined PETA, she’s trying to convince me to try more vegan meals. We’ll see.

Years ago, in the distant 70s, I had a girl friend who was vegan, and so I lived on lentils and veggies for a while. But then, during an epic attempt to drive across Canada in my old VW bus (without the GF) we broke down and had to put into a camping ground while the damage was fixed. This was in White River, Ontario, quite properly described as the a**hole of the province, where we only admitted to passing through. After our first night under the stars, we awakened the next morning to the delicious smell of bacon frying at the next campsite. My co-travellers – three hippies: a Buddhist, a Muslim and a nice Thai girl – all turned their noses up at the assault on their various senses, but I was drawn to the neighbours like a man in a dream. OMG, I might have said, is that real bacon? Come on over and join us, said the neighbours. And I did.

Nowadays, we shop for ethical food at The Big Carrot where we buy free-range eggs and organic bacon.

You see, for all the arguments and all the debates, just because it’s the hardest meat to give up, and because I’m a pragmatist at heart, bacon is still on my ethical food list.