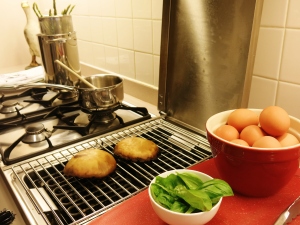 Portobello mushrooms on the built-in grill

DIARY: A feudal jewel of an island in the English Channel.

As an adult, and a confirmed city dweller, I’ve never dared venture out into the country to pick fresh mushrooms. It’s too easy to pick something poisonous and it’s too easy to get fresh ones at the supermarket. But the field mushrooms remembered from childhood seem to have had a flavour all their own.

On the tiny island of Sark, in the English Channel Islands, I spent idyllic Easter and summer holidays. The first time we went there as a family was one of the most wonderful summers in memory. It was 1956, and my mother, sister and I had been evacuated from Cairo, where there was some unpleasantness going on over the Suez Canal. How we quite ended up in Sark I don’t recall, but I think my folks knew someone there. Anyway, Mum phoned the Dame of Sark and asked for a recommendation for a hotel and the Dame (she was the last feudal ruler left in the British Isles) suggested Stocks Hotel, so that’s where we went. The owners became friends and on subsequent holidays, they kindly took me in and I stayed at Stocks alone. Later as a young adult I went to the island on camping trips.

In the kitchen at Stocks there was always a welcome for a hungry lad, and indeed that’s probably where my love of cooking started. Old Granny Falle was the cook and would beckon me over to the stove to taste whatever she was making. Her daughter Sheila ran front of house, dad Charles ran the pub and their daughter Rosemary and I and a bunch of other teens ran wild. As I grew older, I started to help out in the hotel. First, washing up (a horrible chore which I despise to this day), then bussing big trays of plated breakfasts, lunches and dinners to the guests in the dining room, and bussing back the dirty dishes, and finally helping in the bar.

Occasionally, there were farm duties, for the hotel had cows for fresh milk, cream and butter, pigs for fresh chops, bacon and roasts, fields for potatoes and root veggies and a kitchen garden for greens and herbs. My duties usually involved shovelling manure. Fishermen brought in the fresh catch of the day, lobsters in season and the delicious ormers (abalone) for which the islands are noted. These could only be harvested at very low tides and even then were a rare delicacy. Now, due to overharvesting, they are almost all gone and the catch highly restricted. On calm days the fishermen would take a few of us out to haul in the lobster pots with side trips to explore Sark’s many caves.

In the early mornings after an overnight rain, Gran would pass the preparation of breakfast over to a helper and invite me to join her in a hunt for field mushrooms. She knew the secret spots where they grew, and which ones were safe to eat. The reward for helping to pick and carry the treasures back to the kitchen was a full English breakfast, with a whole fried mushroom as the special treat. The cap had a distinct flavour, earthy perhaps, and a texture not unlike a very fine steak. Heaven for a hungry teenager.

We missed the Queen’s visit in 1957, but Charlie the coachman was still getting free beers for retelling the story of her riding in his coach years later. Horse drawn coach, tractor or bicycle are still the only way to get around on the blissfully car-less island. I last visited Sark in the mid sixties, before washing up on North American shores, and have never returned, but as soon as I start cooking a big Portobello, I’m transported back to the Stocks Hotel kitchen.

So get the grill heated up and let’s cook these guys. We’ll serve up a new take on the traditional full English breakfast. Scrambled eggs go exceptionally well with mushrooms, bacon is optional if your religion or diet prohibits, but stacking it up high allows one to leave out the fried bread, muffin or toast and cut back on the calories. In any event, the end results are delicious.