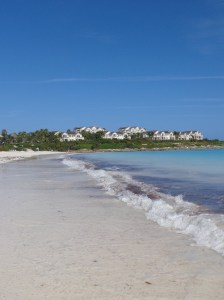 Perfect beach for strolling … or weddings

There’s nothing more romantic than a beach wedding, especially in the Caribbean.

The young couple walking towards us from the beach at Grand Isle Resort in Great Exuma, look really cute. They’re friendly too. We stop to talk and they immediately tell us their names, Alex and Lisa, in the American style, but their accents say England. “English too?” Alex asks. To people fresh from over home, we seem to have mid-Atlantic accents. “North or south?” he continues. We laugh, as this is a continuing joke with us, Diane coming from Yorkshire and myself from London.

Turns out they’re from Manchester, but they’ve been travelling for a couple of years throughout Canada, the US, Central and Latin America and now here in The Bahamas.We meet later over cocktails and they tell us about their boat trip and swimming with pigs, which we are going to do the next day. 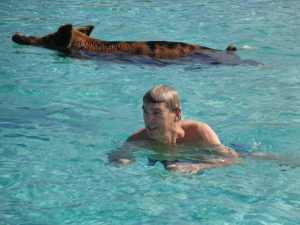 Nigel and a pig enjoying a dip

Then we hear about their great adventure. You can read all about Alex and Lisa and our encounter in the Exumas on their own blog at 2people1life, but here’s the short version.

Everywhere interesting they go, they have a wedding ceremony, and Lisa writes a lovely story about it. Wedding photographers and videographers record the highlights and they are talking to an American television production company about the possibility of a reality series. When they’ve travelled round the world, they’ll pick their favourite wedding destination and return for one last real wedding. I hope the real thing isn’t a let-down after all their exciting, different and unusual ceremonies. The next day they are planning wedding number 34 at Chat ‘N Chill, a resort and wedding destination on Stocking Island, at the other end of Great Exuma. They are going to tie the knot Junkanoo style and Lisa is bubbling with excitement about the day ahead. We promise to catch up with them afterwards, but by the time they get back it’s really late, so we just agree to have breakfast together before they leave for the airport.

While Alex and Lisa were off having another special day of their own, we found ourselves witnesses to a case of bridal panic in Emerald Bay. Everything was ready, the beach setting was gorgeous, the floral arch spectacular, the sun was getting low on the horizon, so why was the bride upset? Apparently the wedding planner had left the specially chosen music in her car and had lost her keys. The guests waited while a runner was sent off in a hotel golf cart to the bride’s quarters to retrieve a duplicate and eventually the proceedings went on. Diane stayed to watch, but I tired of the waiting and repaired to the bar for a “gentleman’s portion” of rum punch.

This got me thinking about beach weddings and their popularity. Lisa tells me that they’ve been married on many beaches — a First Nation’s ceremony on Vancouver Island; in Quintana Roo, Mexico, an ancient Mayan ceremony, with a little bit of dressing up for the tourists; in El Salvador, a sunset ceremony on Valentine’s Day, who could resist; in Chile, at a typical fishing village, Horcon, among the brightly coloured fishing boats; Myrtle Beach, the grand finale of a James Bond themed wedding day; and now Exuma. I’m sure there’ll be lots more to come. When we help Alex and Lisa into the taxi with all their bright Junkanoo souvenirs, we tear up. It’s almost like saying goodbye to our own kids. Diane is justifiably proud of these two young Northerners who had the gumption to pack up and follow their dreams. 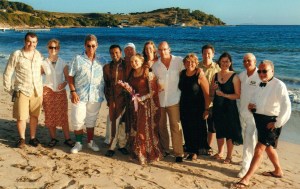 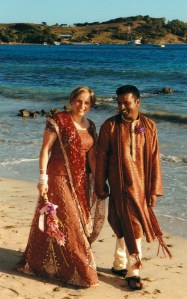 A few years ago a gang of us sailors chartered several yachts out of St. Vincent, cruised around the Grenadines for a few days working on our tans and ruining our livers, and ended up anchored in Bequia, where two of our company were getting hitched. Today, happily, they are the parents of rug rats but, sadly, have sold their boat. Their wedding ceremony was held on a beach on the beautiful east coast of the island. The guests had gathered from around the world and sat under the palms while the celebrant read the couple their vows and pronounced them man and wife. Then we were off to the resort for a splendid evening of feasting. Several sailors had to endure the boat ride of shame the next morning, returning to their yachts by water taxi, still wearing gear from the night before.

It was very cool and beyond romantic. It combined all the wonderful and lovely emotions a wedding brings on. And as a bonus, we all got to dip our toes in the warm Caribbean waters.

One day, I thought, if I ever get married again, I shall do so on a beach.

Wedded bliss on the terrace at Cobblers Cove, Barbados

In December 2009, I had just such an opportunity, marrying Diane on a beach in Barbados. More accurately we were married near a beach, as the tide had come in and reduced the width of available sand somewhat. Our ceremony took place on the terrace of Cobbler’s Cove. We had not invited anyone to fly down for the occasion, relying on the good nature of my Bajan friend Ian, and his beautiful wife Marguerite, to act as witnesses, best man, matron of honour and so forth. They performed all these functions with their usual grace and charm.

A local musician played “Here comes the bride” on his steel pans, which made a colourful background before the ceremony, conducted by a charming lady magistrate.

Because we had relocated from the beach rather late in the day, there was a slight conflict with the manager’s weekly cocktail party. As it turned out we had a modest crowd when we said our vows, who responded with cheers, applause, good wishes, and a few tears. Our champagne wedding reception was thus a freebie, but we did go on to a special dinner in a candle-lit gazebo with just the four of us.

The wonderful Yvette at Cobbler’s Cove took care of all the details, sending us around town with a driver to get the licenses issued and approved. We had a good laugh when we had to note on one form that Diane was a “spinster of St. Peter’s Parish.” When we had to put down our father’s occupations her dad was declared to be a “cutlery factory owner” and she was peeved she couldn’t come up with a posher sounding title. I pointed out on this island that would probably rank with plantation owner, a lot posher than my dad’s bland “business executive” title.  At a local florist Diane picked out white anthuriums and tiny white orchids for her green and white bouquet.

The morning of our wedding, we had early morning tea on our lanai overlooking the lush tropical gardens, and fed crumbs to tiny honey creepers and Lesser Antillean bull finches. (OK, there was a bird book in the room and I looked them up.) Then we went for a swim on the little reef  off the beach and for a while I floated in a school of round bright blue tangs, more than 50 of them. An enchanting moment and one of the very many happy memories I carry of that magical day of our own beach wedding. 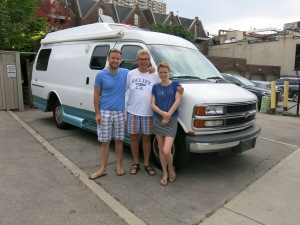 With Alex and Lisa – and Boris – in our Toronto driveway

Update: After their faithful van Peggy died horribly in Pakistan – her axle broke, but they thought they’d run over an IED – Alex and Lisa came back to North America to buy a new van and we had the pleasure of their company for a few weeks in the summer of 2014. Their new van, later named Boris, got stripped of horrible 70s pink and turquoise graphics in our driveway. And then they were off again, shipping Boris to Australia and finally back to Asia. You can read about all their exploits and their many more weddings on their super new website, still at 2people1life.

Another update: Alex and Lisa finally settled down in Maine and are running a B&B in Bedford. They never did get officially hitched. But if they did, I’m sure it would be on a beach!

Featured image – A millionaire’s private island estate in The Exumas