VOYAGE TO THE LAND OF FIRE AND ICE

Cruising around the Horn of South America from Chile to Argentina.

The colourful clapboard houses and weathered Victorian mansions of Valparaiso faded into the darkness as the Radiance of the Seas slipped her mooring and sailed into the steely-blue waters of the Pacific Ocean off the coast of northern Chile.

Valparaiso had been our home for the past two days, and we had enjoyed exploring her eclectic hill-side neighborhoods and riding the rickety wooden elevators to the city’s commercial center below. But we had come to South America to make a-once-in-a-lifetime voyage around Cape Horn. So as our ship headed south to begin its 14-day journey to Buenos Aires, all we could think about was the adventure that lay ahead.

A few days later, the snow-capped volcanoes and emerald forests of Chile’s gorgeous Lake District appeared on our port side as our ship dropped anchor in Puerto Montt’s Reloncavi Sound. Nestled between the ocean and the majestic Andes Mountains just north of Patagonia, the Lake District sits on two tectonic plates with more than 1,000 volcanoes. The geographical result is so awesome that Jules Verne referred to the region as “the land of fire and ice.”

The Lake District was settled by German immigrants who built Puerto Montt and several picturesque villages along the coast of Lake Llanquihue near the snow-capped volcanoes of Cabulco and Osorno. One of the villages, Fruitillar, is home to a museum of traditional wooden houses, a mill and a blacksmith’s shop that show what life was like for the first settlers. Just outside the museum, there are several bakeries that serve traditional German “Kuchen” cakes which are made of pastry and local fruit.

A Magellanic penguin at the Otway Pecket Reserve in Punta Arenas

After leaving Puerto Montt, we made our way south along the majestic fjords of Patagonia and into the historic Strait of Magellan on our way to Punta Arenas. We were now sailing in the path of Ferdinand Magellan, the great Portuguese navigator who discovered this narrow path between the Atlantic and Pacific oceans in 1520.

On the wind-swept pampas outside Punta Arenas, we found plenty of wildlife including giant condors, grey foxes, falcons, and an ostrich-like bird called a “Nandu.” We also found two colonies of Magellanic penguins in the area, including one in nearby Otway Sound.

The Otway Pecket Harbor Reserve has a small viewing porch on the beach where we watched penguins slide into the Sound in search of food for their off-spring. There’s also a pathway with resting points where we were able to see penguins waddle to their burrows just a few feet away. While timid if people get too close, these beguiling penguins are not shy about poking their heads out of burrows, stretching their wings and squawking a few arias just to let you know who’s in charge.

After a delightful day in Punta Arenas, we sailed south along the Beagle Channel towards the remote Argentine city of Ushuaia. The 150-mile channel is named after the HMS Beagle, which carried naturalist Charles Darwin through these waters on her second voyage of discovery in 1832. 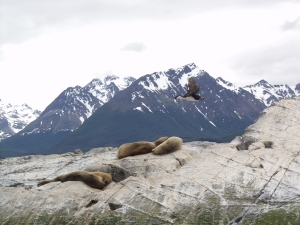 Sea lions in the Beagle Channel

The first European to visit Isla Grande de Tierra del Fuego was Ferdinand Magellan. As he sailed into the strait that separates mainland Chile from the island, he was amazed by the many fires the indigenous Indians had lit along the southern shore and named the place “Tierra del Fuego” (Land of Fire).

In order to see this rugged beauty close up, we took the “End of the World” train to the nearby Tierra del Fuego National Park, which is filled with soaring peaks, pristine rivers, and beautiful hiking paths that wind through emerald forests and the rocky inlets of the Beagle Channel. It’s a naturalist’s delight, and we were thrilled by the spectacular scenery, fauna and wildlife.

The next morning the winds began to howl as we sailed south of Ushuaia and into the furious seas of Drake Passage near Cape Horn, the infamous landmark just 400 miles north of Antarctica. The winds were getting near hurricane force, our bow was crashing through 15-foot seas, and piercing rain was needling down.

Outside on the deck, we were beginning to brace ourselves when a strong gust ripped a glass panel off the roof of the Solarium Pool and sent it crashing onto the promenade deck some 20 feet below. At this point, a smaller cruise ship that had been following behind us turned tail and headed for protected waters north of the Cape. But we pressed on, eventually rounded Cape Horn, and almost instantly sailed into calmer seas as we headed north along the coast.

After several tranquil days at sea, we dropped anchor off the coast of Punta del Este in southern Uruguay and awoke to find ourselves surrounded by sand dunes, beautiful beaches and expensive-looking condominiums. We rented a car and drove west along the coast to the sea-side resort of Casapueblo, which dramatically clings to the edge of a cliff overlooking the Atlantic Ocean. The hotel’s “modernista” style of design by Uruguayan artist Carlos Paez Vilaro features a white-washed façade of terraced apartments, gothic-looking spires, a rabbit-warren of hallways and staircases, and varying shapes of balconies and windows. 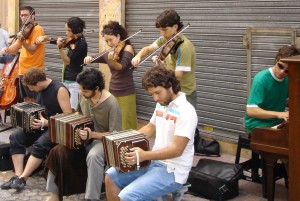 By now, it was time to board our ship for the voyage up the Rio de la Plata to our final destination in Buenos Aires, Argentina. Located on the southern banks of the Rio de la Plata, the Ciudad de Nuestra Señora Santa María del Buen Ayre was founded in 1536, and expanded through waves of immigration from Europe. As a result, Buenos Aires was built with European-style grand plazas, broad boulevards and grand buildings, which is why the city is often called “the Paris of South America.”

While Buenos Aires is a huge city filled with 3 million residents called “portenos” (people of the port), the main tourist areas are concentrated in seven small barrios including Monserrat, where we found the 19th-century Casa Rosada (pink house) in Plaza de Mayo. The Casa Rosada has been home to many Argentine leaders including Juan Peron and his charismatic wife, Eva, who famously addressed her adoring public from the palace’s left balcony in1951.

After visiting the palace, we took a taxi to the Caminito pedestrian walkway in the Bohemian neighborhood of La Boca, which is surrounded by colorful houses, pretty cafes, and street vendors selling their handmade crafts. The street is lined with sculptures, murals, engravings, street musicians  and tango dancers who perform and pose for pictures with tourists for a few pesos.

Since it was our last day in Buenos Aires, we decided to watch a tango show and dine on some delicious Argentine grilled meats in the barrio of Puerto Madero. After two weeks of trekking through some of the most spectacular scenery in the world, it seemed like a fitting way to conclude our Radiant rounding of this magnificent continent. 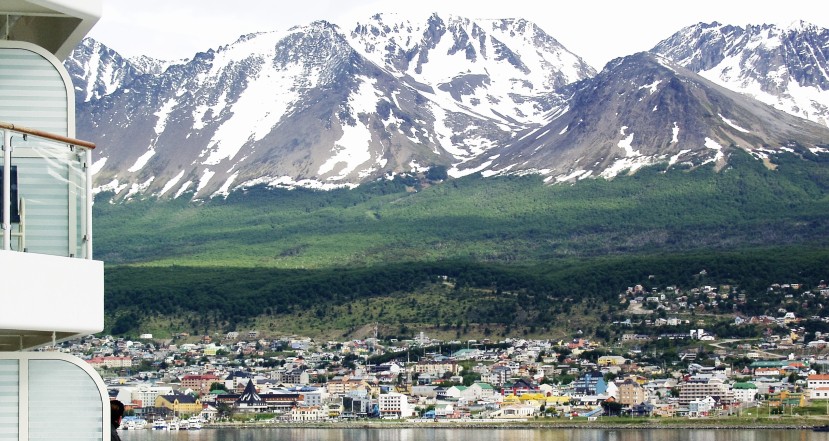