Fall farmers’ markets dot the city and bring the country to town, so we can buy really, really fresh food.

We’re shooting one of the first episodes of my new Bell Fibe TV1 series, Market to Table. Part one starts with me in a Toronto marketplace checking out the food. Part two sees me in a kitchen with a chef, cooking up a feast. Part three sees the meal beautifully plated and accompanied by a fine wine. Afterwards and off-camera the crew devours the grub. Come to think of it, that would make a fine ending to the show, proving that the food is actually edible. However it works out, the episode we taped in the Evergreen Brick Works Farmers Market is in the can. 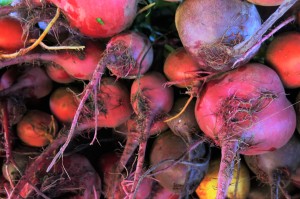 For almost a hundred years, until 1984, this site was an eyesore in the Don Valley as industry triumphed over nature. Here, the Don Valley Brick Works produced bricks for many of Toronto and indeed Canada’s most important buildings. Then the factory was abandoned and the area fell into ruin. Since 1998, much of the 40-acre site has been preserved as a natural area, with parkland, wetlands and wild flower meadows, ravine forests and trails. Recently thousands of square feet of former industrial space has been renovated and restored. The Farmers’ Market started in 2007 with 25 local farmers and producers and has grown to become one of the largest farmers’ market in Toronto.

We met a fine bunch of people there and I’ll introduce them to you over the next few weeks, but our first interview was with a gnarly old farmer, skin wrinkled by the sun, hands worn from years of handling the soil. Well, if that’s your image of an organic farmer, forget it. Brianna turns out to be a lovely young woman who is learning the craft from the roots up at Everdale Farms.

Chioggia beets are striped inside like a candy cane

Everdale is a farm-based organization that provides a hands-on farming education in a very worthwhile effort to build healthy local communities. She tells me that not only did she get up very, very early to come to market, she was in the fields personally picking the crop they have on sale at their stall today. Furthermore, she has lived with these veggies since they were seedlings, planting them out and assiduously weeding them until they were ready for harvest. There’re a lot of beets and other root veggies on display today, as you’d expect at a Fall market, and I buy some bunches of Chioggia beets from her. She cuts one of them in half for the camera and people gather around to see the candy cane stripes inside the root. It will be interesting to see if the stripes survive cooking. They taste exactly the same as traditional red or golden beets, Brianna says. 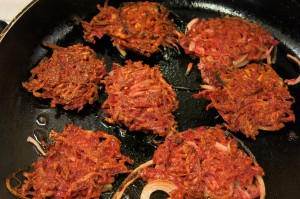 Frying up the fritters

Whether beets end up in the show, time will tell, but for now I’ve supper to cook and I’ve been thinking of a novel way to present beets for a few days. If you have only ever served beets well boiled for an hour, you’re in for a treat as this quick frying method preserves the inherent sweetness of the root. On top of that Chioggia beets are sweeter than red or golden varieties.

I got this idea from Nigel Slater’s Kitchen Diaries II, where he offers beet and onion fritters as a starter accompanied by a topping of gravad lax or smoked salmon. He adds a tasty sauce made from dill and Dijon, although I buy a sweet mustard from Ikea that is outstanding with gravad lax. However, the fritters are great as a side for many main dishes or as a replacement for potatoes or other starches.

Beet and onion fritters as side to pan fried salmon

Update: Market to Table launches on May 16, 2016, on Bell Fibe TV1. The video on demand series will be available to viewers 24/7 for about three years.

If you enjoyed reading this article and don’t already subscribe, please scroll down to the end of the home page and add your email address to receive notification of all our stories. We’ve over 4,000 folks following now (thank you each and every one) and you can help push the numbers up by subscribing.