GREYHOUNDS OF THE SEA

The Star Clipper under sail in the Caribbean

Clipper ships once raced across oceans to deliver precious cargoes; now they sail the Caribbean and decant passengers onto idyllic islands.

Like snow-white clouds, the billowing sails of our clipper ship began filling the sky as we glided through the deep blue waters of the Caribbean Sea off the coast of Barbados.

“Heave away,” commanded Captain Bruno Borowka as his deckhands strained to unfurl the Star Clipper’s 36,000 square feet of sail onto its towering skeleton of four giant masts.

As the crew pulled up the sails, the stirring musical theme from the movie “Conquest of Paradise” came blaring across the public address system, reminding us that tall ships were once the primary mode of transportation in these idyllic islands. And for much of the 19th century, clipper ships were the sleekest and fastest of them all, racing from one continent to another with their precious cargoes of passengers, tea and opium. 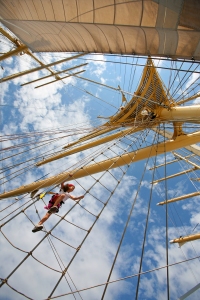 A passenger climbs up the rigging to the crows nest

We were less than a mile out to sea, but we were ready to write our names on the wind like those legendary “greyhounds of the sea” had done more than a century before us. “If we want to reach top speed, we need some volunteers to hoist our biggest sail,” said Captain Borowka, who learned his trade in the Polish naval academy.

A dozen passengers grabbed a rope and began hoisting the main fisherman sail some 226 feet aloft the deck, putting the last of the ship’s 16 sails in place. The sails, with strange-sounding names like spankers, jiggers and gallants, were now pushing the Star Clipper’s raked bow through gentle seas at a brisk nine knots per hour. But there wasn’t a green-faced passenger to be found thanks to the ship’s ballasted keel, which kept her upright with only the slightest list to leeward.

After a leisurely morning at sea, we made our first landfall at Martinique some 130 nautical miles northwest of Barbados, and tied up at the pier in the bustling capital city of Fort-de-France. Known as the “Island of Flowers,” this French overseas department is a dream-like landscape of volcanic mountains, lush rainforests, and sprawling banana plantations.

Later that evening, a group of local singers performed aboard ship as we sipped pastis under the stars. Singing a variety of Creole and French ballads, the group strummed away on their guitars until we unfurled our sails at midnight and continued our seven-day voyage through the Windward Islands of the French and British West Indies.

Guests enjoy a refreshing dip in the ship’s pool

Built in 1992, the 360-foot long Star Clipper carries 170 passengers in one of the largest and most comfortable sailing vessels afloat. The vessel also comes with its own parrot, Fleur, who can usually be found squawking by the outdoor Tropical Bar, one of two cozy lounges on the ship. Other facilities include a couple of small saltwater pools, an intimate library with fireplace and brass fittings, a handsome dining room large enough to serve all passengers in a single seating, and two sunning areas.

As dawn broke the next morning, the lush coast of St. Lucia appeared over our port bow as we anchored in Marigot Bay, a tiny anchorage surrounded by swaying palms and steep mountains. After a morning at the beach sailing dinghies and riding banana boats, we set off for the mud baths near the twin Pitons that soar like pyramids some 2,500 feet above the small village of Soufrière.

Petit Piton at Soufriere on the island of St. Lucia

The volcanic Pitons overlook a sulphur spring that feeds hot, salty water to a nearby bathing pool and mud flat, purported to contain many cleansing and purifying minerals. With much merriment, we applied the black goop to our face and limbs, wanting desperately to believe our guide’s claim that it would remove fat cells and restore our youthful complexions. We were sure the magical mud had worked, but after rinsing it off in the spring’s excruciatingly hot water, we looked too much like cooked lobsters for anyone to tell.

We rejoined the Star Clipper in Soufrière, where we watched the sun sink into the Caribbean Sea as Ivan the one-man orchestra played gentle melodies on his keyboard.

The serenity was short lived as Captain Borowka came walking along the Sun Deck looking for volunteers. “Does anyone want to take the helm?” he asked with a smile.

Captain Borowka at the helm

Jack Langhorne Jr., a Floridian with a passion for Hawaiian shirts jumped up and was soon behind the wheel guiding the Star Clipper out to sea. “Watch your compass setting,” the Captain advised as we strayed a bit too far to port. “Keep to your heading.”

Later that evening in the ship’s main dining room, we feasted on pesto linguini, grilled swordfish and a wonderful crème brûlée, washed down with a bottle of French chardonnay.

The next day we woke to find our porthole filled with palm-fringed beaches and colourful wooden boats basking in the early morning sunlight of the Grenadine Islands. Locally built boats are still a familiar site in the Grenadines, whose 32-islands and cays provide a sailor’s paradise of secluded bays, sandy beaches and clear turquoise waters. 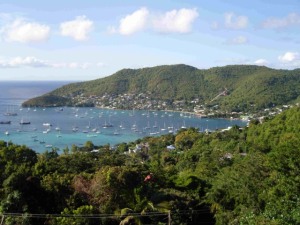 Admiralty Bay, Bequia in the Grenadines

Our first stop through the Grenadines was Bequia, a tranquil island of fisherman and boat builders whose laid-back capital of Port Elizabeth has several hotels and bars along the beach with alluring names like Frangipani and Gingerbread. From Port Elizabeth, it’s a lovely stroll to Spring Bay where a 200-year-old working plantation and the ruins of an old sugar mill overlook the ocean.

The next morning our ship sailed 25 nautical miles south to Tobago Cays, a national park of small, deserted islands and reefs known as the “crown jewels of the Grenadines.” After anchoring, we boarded a small boat that took us past pristine reefs and sleepy cays, including the exclusive Palm Island resort, before disgorging us on a powdery-white beach for swimming and snorkelling. 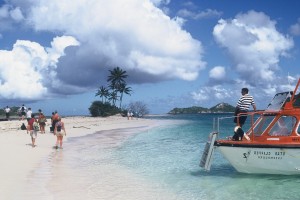 A tender decants guests on a beach in the Grenadines

Back on board later that afternoon, the crew gave lessons on mast climbing and invited passengers to crawl up a rope ladder to the first crow’s nest some 70 feet above the deck. A handful of us accepted, and one by one we were strapped to the ladder with a safety harness and made our way up the mast to the tiny steel gondola high above us. The view was spectacular, but as the ship swayed in the wind, we were grateful we didn’t have to climb the next two levels.

The “spice island” of Grenada was our final port of call, and as we sailed into pretty St. George’s harbour the next morning, we could smell nutmeg, cloves and cinnamon rising from her steamy shores. “In this Eden, Nature has been wildly prodigal with its gifts,” Hugh O’Shaughnessy wrote of Grenada in his book Around the Spanish Main.

Ladies at work in the nutmeg factory in Grenada

In order to see the lush rainforests, green hillsides and exotic flowers of this tropical paradise, we took a tour bus into the mountains of the Grand Étang National Park some 1,700 feet above sea level. Before heading back to St. George’s, our tour bus stopped at an old factory in Gouyave where we were shown how local workers extract and process nutmeg. The bushy nutmeg tree produces a yellow fruit like an apricot, and yields two main spices – nutmeg and mace. But every part of the fruit is used to produce some kind of flavouring or preserve, which has led to popular folklore that an entire family could live from the proceeds of a single nutmeg tree.

As we raised our sails the next day and began our long voyage back to Barbados some 150 nautical miles to the northeast, we were reminded of another “saying” that the Captain had told us over dinner.

“Do you know what Honoré de Balzac said were the three most beautiful sights in the world?” he asked. “A sailing ship under full sail, a dancing lady, and a racing horse.”

After a week under canvas in the Caribbean, he wasn’t going to get an argument from us!

HISTORY OF THE GREAT CLIPPER SHIPS

The great clipper ships evolved from the late 18th-century push for greater speed in carrying goods and people across vast oceans.

To outrun traditional sailing ships of the day, Americans began designing faster vessels in the early 1800s with sleek hulls, low sterns and large sail areas. They were called Yankee clippers because their bows clipped over the waves rather than ploughing through them the way that windjammers did. 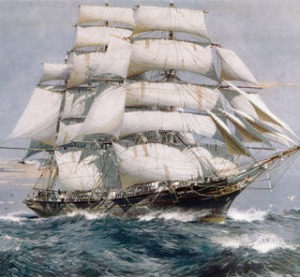 An artist’s rendition of the Cutty Sark

Clipper ships were usually given names like Flying Cloud, White Squall and Stag Hound to reflect their superior speed, which averaged 10 knots, but could reach as high as 20. In addition to passengers, they carried cargo like tea, wool, furs, opium and grain from continent to continent, often racing from one port to another in the hopes of setting new speed records and earning higher profits.

By the mid-1800s boat builders had perfected the clipper ship design and were constructing some of the fastest sailing ships ever put to sea. Clippers like the Ariel, Sea Witch and the British-built Cutty Sark became legendary not only for their speed, but for their beautiful profiles and classic designs. These are the ships that inspired the moniker “Greyhounds of the Sea” from maritime historian Carl Cutler.

When trans-Atlantic passenger service under sail ended in 1870, most clipper ships gave way to steamships, which took over the race for speed records. But the Cutty Sark survived and is preserved in permanent dry dock as a national monument in Greenwich, England.

Today, a number of tall ships are still used as naval training vessels, and a handful sail commercially for cruise lines like Windjammer. But only three clipper ships have been launched in the last 100 years – the Star Clipper, Star Flyer and Royal Clipper, which sail under the Star Clipper cruise line flag.

Mikael Krafft, the Swedish businessman who risked more than US$135 million building these clippers, came up with the idea in 1987 while vacationing on his own 125-foot schooner in the Caribbean.

“We were talking about what it would have been like to be a passenger on one of those old clipper ships,” he recalls. “I decided I wanted to give other people the chance to have this type of experience at a reasonable cost. So I decided then and there to build a clipper ship for passenger cruising.”

As a result, there are once again three greyhounds of the sea flying across the oceans.