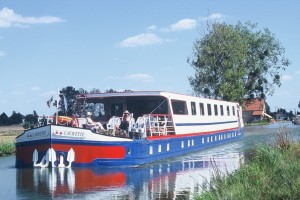 The Lafayette on the Canal de Bourgogne

From water to wine along the beautiful canals of the French Burgundian countryside.

After a two-hour train ride from Paris, we boarded a brightly colored barge in Dijon where we were welcomed with flutes of Kir Royale by our tour guide, Patrice. A charming Frenchman with a thick gallic accent, Patrice introduced the seven other members of our crew (including Pierre, our private chef) and gave us a brief history of canal cruising.

When the Canal de Bourgogne opened in 1832, rural canals were the backbone of Western Europe’s transportation system. For more than a century, horses plodding along a narrow tow- path beside the canals slowly pulled barges of commercial cargo, including wine, through some of the prettiest scenery in Europe. 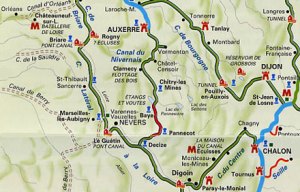 Map of the Burgundy canal system

Today, dozens of engine-powered hotel barges leisurely cruise the waterways of Europe, including 800 miles of man-made canals in the Burgundy region. The Canal de Bourgogne (145 miles and 189 locks, or écluses), and the Canal du Centre (67 miles and 61 locks) are the main pleasure-boating canals, while the Saône and Yonne are the primary connecting rivers.

After Patrice’s introductions, our 22-passenger barge, the Lafayette, left Dijon and meandered downstream to the village of Ouges, where we moored for the night. The next morning we boarded our private tour bus (which was parked in a farmer’s field beside the canal), and embarked on “la route des grands crus” to the nearby vineyards of the Côte de Nuits.

Our first stop was the world-renowned Château du Clos de Vougeot, established in the 12th century by the monks of Cîteaux, who over many centuries elevated wine making to an art form and Burgundian wine to an elite status. The château boasts a fermenting room with four huge wine presses made of oak, a 13th-century wine cellar and the headquarters of the Brotherhood of the Knights of the Tastevin who gather here regularly to taste some of the world’s best wines. 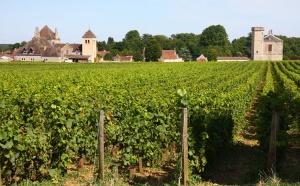 Just down the road, we got our chance to taste some of the local vintage during our visit to the Château de Marsannay, which has been making wine since the seventh century. Our host presented each of us with a sommelier’s tasting cup, and took us below to the cool, candle-lit wine cellars where we paused at various points to sample some of the château’s best growths, including Gevrey-Chambertin Premier Cru chardonnay.

Souvenir tasting cups in hand, we returned to the barge for lunch and some more wine, which like all liquor and meals on board the Lafayette, are included in the cruise fare. Our main course was a delicious Quiche Lorraine, with a tangy salade de concombre à la grain de moutarde, choufleur aux herbes, and carottes râpé au citron. This was followed by a sumptuous plat de fromages Français (the afternoon selection being Comté, Eppoisses, and Ste. Maure) and a panier des fruits for dessert.

Cycling along the canal’s tow-path

As our barge ambled down the canal and we finished our coffee on the sundeck, the less somnolent among us decided to liberate some of the boat’s bicycles at the next lock. Passengers can easily step off or on the barge at each lock, and walk or cycle along the tow-path to the next lock faster than the slow-moving barges (average speed about three miles per hour).

We cycled several miles along the path, stopping occasionally to admire the rolling countryside and its fields of grapes, sunflowers, corn, and wheat, some of which crept right down to the edge of the canal. At locks where there was a nearby village, we also cycled through the winding streets looking for an old church, château or mairie that might give us some sense of local history.

The Lafayette exits a lock

Eventually, we reboarded the barge at one of the canal’s many écluses, most of which still use lock-keepers to hand-crank the lock’s huge gates open and shut. Like many hotel barges, the Lafayette is roughly the same size (128-feet long, 16 ½-feet wide) as the average lock, which makes for a tight fit and requires unerring judgement from the pilot.

The Lafayette tied up in Longecourt in time for a post-prandial evening stroll to the village square, where we sipped digestifs at a local café. The next morning we cruised to Saint-Jean-de Losne, not far from where the Canal de Bourgogne meets the Saône River, and boarded our bus for a 45-minute drive to the town of Beaune and its famous “palace for the poor.”

The Hospices de Beaune Hôtel-Dieu was built in 1443 by the Duke of Burgundy’s chancellor, Nicholas Rolin, to care for the many local citizens suffering from poverty and famine following the Hundred Years’ War. With its gothic façades and multi-coloured varnished roof tiles, the hospice is considered a jewel of medieval architecture. The multi-coloured tiles proved so popular, they gradually spread throughout Burgundy and have become symbolic of the region.

We returned to our boat for late-afternoon apéritifs, followed by another of our chef’s gourmet creations for dinner — warm goat cheese salad, white fish in potato crust with sauce vierge, and mille-feuilles of apple and pear with caramel sauce. The evening’s wine selection included Chablis and Santenay, while our cheese plate featured Pont l’Évêque and Fourme d’Ambert.

After dinner, we had coffee and cognac in the bar-salon, one of three public areas on the main deck which includes the dining room and a partially covered sundeck. Below deck, the air-conditioned Lafayette has 12 modest, but comfortable cabins (four doubles, six twins and two singles) with porthole-style windows and small en suite bathrooms.

We cruised the river as far south as Châlon-sur-Saône the next day, before entering the Canal du Centre Wednesday morning on our way to Chagny. After passing through the tallest lock of our cruise — at 50 feet, about four times higher than anything we had experienced in the Canal de Bourgogne — we moored at Chagny for lunch and our next shore excursion.

We spent the afternoon visiting one of the oldest châteaux in Burgundy, where the late Comtesse d’Aviau de Ternay gave us a private tour of her home. Still family owned, the Château de Rully has been occupied continuously for the last 700 years by ancestors of the original owner, Robert de Rully.

In exquisite French, which was translated into adorable “franglais” by Patrice, the Comtesse pointed out artifacts dating back several centuries as she led us through two rooms of her historic home. She then took us on a tour of the inner courtyard and the four corner towers and walls which surround it, explaining the evolution of her home from a fortress used to defend the Village of Rully, to a château with sweeping vineyards now used by local vintner Antonin Rodet to produce some of the area’s finest wines. 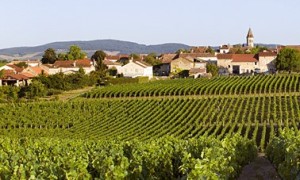 The vineyards of Santenay

The next morning, we lingered over breakfast and the wonderful view of Santenay’s vineyards as the Lafayette slowly made its way 12 miles up the canal to Saint-Léger-sur-Dheune. Breakfasts are self-serve aboard the Lafayette, with cereals, yogurts, fruits, juice and a variety of croissants and breads set out on a table from 7:00 to 9:30 a.m. Eggs to order are prepared on request, and coffee is made available all day at the bar, as are unlimited soft drinks and alcoholic beverages.

After docking, we proceeded to the Château de Couches, a wonderfully picturesque medieval castle built by the powerful lords of the Duchy of Burgundy in the 12th and 13th centuries. We were shown around the grounds and the interior apartments by the owners’s wife, and then taken to the cellars for a tasting of the best local growths, which were impressive enough to warrant the purchase of several bottles.

Our fun-loving family of oenophiles

As we returned to the Lafayette for our final dinner, we realized that our normal table groupings of four had been reorganized into a single banquet-style table for 22 people. In six days, our group of nine couples and four singles had bonded into a fun-loving family, despite hailing from three countries and two continents, and ranging in age from 35 to 72 years. Sure, we all spoke English, but it was our adventurous spirits and our love for water and wine that had brought us together.

Well, at least the wine. As we walked down the gangplank of the Lafayette for the final time the next morning, our young British bartender, Peter sighed in relief. We had broken a 30-year record for wine consumption during a six-day voyage, and Peter was looking forward to a quieter week.