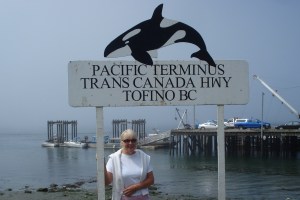 In one day, we’ve driven right across Vancouver Island, from the waters of Georgia Straight to the Pacific Ocean, stopping only to admire Cathedral Grove and Kennedy Lake. Before we reach our destination in Tofino, there’s time for a quick visit to the fishing port of Uclulet. It’s at the other end of the long arm of the sea which reaches right up to Port Alberni, where we stopped only at Tim Hortons. We need to stretch our legs, so we pull in near Amphitrite Point Lighthouse and walk for 20 minutes or so along the beginning of the Wild Pacific Trail, down to the lighthouse and back. At this end the trail is not very wild, with manicured and well laid out paths, perfect for a breather after a long ride. The turbulent Pacific crashes on the rocks below the light house, an achingly beautiful scene in the bright sunlight.

Much refreshed we drive around the town and check out the Uclulet Government Dock, usually home to dozens of boats. Today, it is almost deserted, so the fish must be running somewhere out on the ocean.

My watercolour sketch with the missing boat

Years ago, I sat nearby and painted the moored fishing boats, while a thick mist almost obscured the view. It wasn’t actually raining, but the moisture in the air made it hard to paint with watercolours. I gave the painting to my friend Katherine, whose dad had a series of fishing boats. It was a hard life and once as a teenager crewing for her father, loaded with salmon, they were caught in a storm, lost the boat and were rescued by Coast Guard helicopter.

The last time her dad tied his boat to this dock, a newly refurbished 100 foot tuna troller named Western Viking, tragedy ensued. It was the first year Katherine had not gone fishing with her dad. Captain Keith had left the boat, but as he walked up the dock, fire alarms sounded. Rushing back to the boat, smoke and flames starting to pour out of her hull. As he bravely went below to check all the crew were safe, he was overcome by thick smoke and died. Even sadder was the fact that the deck hands were already ashore. Captain Keith’s heroism, thinking of his crew more than his own life, is commemorated in a marker at the end of the dock.

Inexplicably, the painting shows no boat moored in the middle of the dock. It’s almost exactly where Western Viking would have been tied up. Katherine has the painting hanging in her Vancouver office and thinks of her missing dad every day.

As we drive the length of Long Beach, the surfers are out in the sunshine, the long rollers giving them a perfect ride. The tsunami warning signs along the road remind us of the power of the ocean when she’s in a bad mood. We’re hoping for a nice, restful visit.

We receive a warm welcome at the Wikaninnish Inn. The doorman is from Australia and greets us in an accent that is pure Oz. We head to the bar, as our room is not quite ready, and a drink would be welcome. The bartender is from Germany. Before I can say much, he comments that it’s quite a United Nations in the staff quarters.

Our room overlooking the Pacific Ocean is really nice, with a whirlpool bath tub. I relax into it, with my drink beside me and a view over the now gentle waves. The Pointe Restaurant has the same view over the rocks and waves and is billed as a gourmet spot, but we thought the food at dinner overpriced and pretentiously presented and served. I particularly hated the server pointing to all the goodies on the plate, his finger almost touching the food. Please, just let me enjoy. I’ve read the menu so I know what I’ve ordered.

Sun peeks through a sea mist on Long Beach, Tofino

The Driftwood Café is hidden away in the basement of a different building. I just wanted a coffee and something simple for breakfast, but the wait, first for a seat and then service was interminable. Turns out the food came from the kitchen in another building, so it was both cold and overpriced.

The beach is wonderful, but July fog rolls in and blanks out the view. We paddle in the water, which is freezing and admire the guts of a class of wet suited surfers heading out into the invisible waves. In a silly moment Diane and I start writing luvvy messages to each other in the sand. I’m reminded that my friend David had a beach wedding here, in full Scottish regalia (see HOT BEACHES, COOL WEDDINGS).  Drafty kilt indeed.

After our disappointment with the meal offerings at the hotel, and the fog, we head into Tofino seeking food and refreshment. In the village there is bright sunshine, and an entrancing view into the mountains. We find some great spots, including one where the happy hour features $1 oysters served any way. We gorge on oysters Rockefeller, cheesy morsels baked in a bed of spinach. Another day we sit in a diner with a view over the harbour, watching the seaplanes come and go, and the whale watching tours leaving the dock. We decide we’ll chase whales on another trip in warmer waters.

The waves and the sea mist roll in

If we’d thought our itinerary out a bit more carefully, we’d have been better off breaking our journey back to Victoria into two stages. But we didn’t and we had to suffer the route back through the mountains, and the interminable camper trailer traffic. It takes more than five hours and we only make a couple of stops, relying on the healthy snacks we’ve brought in the car to sustain us.

However, we can’t pass by Goldstream Provincial Park without having a look. There’s a boardwalk along the stream running through this old-growth temperate rain forest, and even though the salmon are not running, there’s still plenty of wildlife and flora to see.

I’ve been here before, in November, at the height of the run. Thousands of mostly Chum salmon return to this world-class spawning stream between October and December. The salmon’s mating ritual is timeless: the males growing ferocious barbed lower jaws to battle competitors, the females digging nests in gravel. She lays her eggs, or roe, and he adds a shower of white milt. Then, weak and exhausted, the salmon slowly die. In the gravel a new generation lives to carry on the cycle of life. 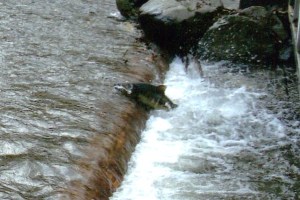 While the spectators observe the salmon struggle upstream in the shallow waters or jump up weirs with the last of their energy, others watch too from the other side of the stream. Hundreds of eagles perch on the coniferous trees, waiting their chance at a meal. I see a couple of bears, oblivious to the humans watching them less than 50 yards away, as if there’s some predetermined territorial divide down the middle of the river: folks this side, bears that side, neither bothering the other. There’s nothing majestic about the gulls. They dive right in, screaming and fighting, pecking at the living flesh of fish trapped in shallow pools.

One little bird — I learn later it is a dipper — rests on the rocks in between underwater forays. Then it ducks underwater and actually runs along the bottom, feasting on salmon roe.

At last we pull into The Fairmont Empress. This is a grand old lady of a hotel and we are looked after right from the doorman’s friendly greeting to the front desk. Because we are members of the President’s Club, we are given an unexpected treat and comped up to the Gold Floor, which is a very pleasant surprise. The concierge greets us by name, having been alerted by the ground floor team. Our room is as fine as you’d expect and well renovated in recent years. In the lounge there’s an honour bar and oodles of evening canapés, though the guests make an undignified rush at each new tray as it is brought out. One would have expected a little more couth from fellow golds.

Both Diane and I have stayed here before. The last time she visited, she was in the company of her Hollywood actress friend Cloris Leachman, on tour with Showboat and having a night off from the theatre in Vancouver. They were put up in a big two bedroom suite, Cloris’s two small dogs accommodated and gift towelling dressing gowns provided to take away. Diane still has hers. For their return ferry journey the hotel provided a luxury packed lunch from the Bengal Lounge, with real linen napkins and hotel silver plate cutlery. That’s why we have a set of CP Hotel knives and forks to this day.

On past visits over we have both enjoyed the famous curry dinner offered in The Bengal Lounge, and after our long drive did not want to venture out for dinner. We were really looking forward to our visit. But how a room can change. Now it’s just a noisy bar and lounge with less emphasis on the dining aspects. The once magnificent à la carte spicy food menu is reduced to a very disappointing tired and stale curry buffet cart. This used to be a dress up spot and now, in keeping with the rest of society I suppose, its patrons seem to be uniformly scruffy. So much for the jacket I had been carrying across the island for just this night.

Before we leave for the airport, we take a stroll around the grounds. The rose garden is still there and as entrancing and as scented as ever. In the front of the hotel are two massive and weird trees that look like giant shaggy dogs. The strangest topiary I have ever seen. We’re still smiling when we get on the plane.

Featured image – the view from the Wikaninnish Inn, Tofino

If you enjoyed reading this article and don’t already subscribe, please scroll down to the end of the home page and add your email address to receive notification of all our stories. We’ve over 4,000 folks following now (thank you each and every one) and you can help push the numbers up by subscribing.