THREE WHISKIES WALK INTO A BAR 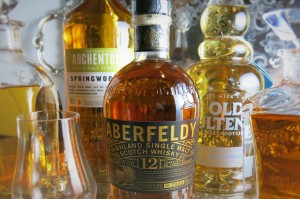 WARNING: The over consumption of whisky may cause you to think you’re funny. (Proposed Health Canada warning label.)

All joking aside, a huge affront has been visited on the world of whisky. The world’s leading whisky expert, Jim Murray, has issued his annual whisky bible and there’s not a single Scotch in the top five. Leaving aside the details of the list for a moment, Brit Murray has mixed up whisky from all over the world and put it in one bag. I fundamentally disagree. Single malt Scotch simply cannot be judged in the same breath as Canadian rye, Kentucky bourbon and all the other whisky varieties made in other countries. So let’s have a look at Murray’s list and see if any of it makes sense.

Number one is a Canadian rye whisky. Did you know Canadian rye whisky doesn’t, by law, have to contain any rye? Winner Crown Royal Northern Harvest Rye, made in Gimli, Manitoba, at the old Seagram distillery and now owned by Diageo, comes from a mash of corn, rye and barley. Canadian whisky doesn’t have to declare colourings. By the way, this has flown off the shelves at the LCBO here in Toronto, since the announcement and is currently almost unavailable.

Number two is an American rye: Pikesville Straight Rye. It’s made from a mash that, by law, must contain at least 51 per cent rye and boasts a six year maturation. Murray has a home in Kentucky, as well as England, which may account for his affinity for this brew.

Number three is an Irish whisky, which at £180 a bottle is too expensive to compare.

Number four is another American whisky, this time a bourbon: William Larue Weller Bourbon. American whiskies, by law, may not contain any colouring or flavouring and bourbon must contain at least 51 per cent corn. The company states they’ve replaced the usual rye with wheat in their blend. No age statement is given, but the winning sample was bottled in 2014.

Number five is a Japanese whisky. I’m not going to comment (and I’m never going to drink it), so that’s that.

The three that are left, after extracting my personal prejudices, are two ryes and a bourbon. Any whisky drinker will tell you rye and bourbon are utterly dissimilar to Scotch. It’s like comparing apples and oranges, or gin and vodka.

The writer Charles MacLean, whose World Whisky book is my own personal bible, expressed similar scepticism. Interviewed by The Times, he said: ‘It’s a marketing ploy. You should compare like with like. The whiskies from around the world are all made to be different. Canadian whisky allows for all sorts of additives. This is forbidden in Scotch, which has strictly defined terms of how it can be made. It must have the flavour derived only from the raw materials: barley, water and yeast. Nothing may be added.’

I was travelling the day I read the story of Jim Murray’s lapse, under the headline ‘Scots left reeling as Canadian whisky named world’s best,’ in the morning Telegraph. After the driver picked us up at our Yorkshire cottage, we stopped at the co-op shop in the next village to pick up the paper and I had the long run over the Pennines to Manchester airport to stew on the news.

Offered a wee dram in the World of Whiskey shop in duty free, I felt obliged to partake a sip or three of Old Pultney, even though it’s not yet 10 am. That perks up my mood and I buy a bottle, only available at airports. It’s distilled in Wick, about as far north as one can go in Scotland and aged in bourbon casks, which give it a woody sweetness. It’s light and not at all peaty and perfect as a breakfast single malt.

On the shelves, I spot another favourite. Its Auchentoshan, the Springwood expression, which is also matured in bourbon casks. This is one of my favourite single malts and I know the Scotch bucket is getting empty so there’s no further argument.

Just before Christmas I receive a very pleasant surprise in the form of a gift of Aberfeldy, a single malt quite unknown to me. By coincidence, later in the afternoon a whisky connoisseur friend drops by and it seems like a good moment to break the seal. Out come the Glencairn glasses, perfect for capturing the aromas and flavours of single malt. In the spirit of drinking my whisky any way I want, I add two ice cubes, which my drinking companion distains. 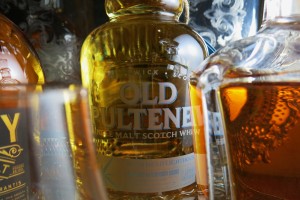 We immediately like the Aberfeldy. It’s a 12 year old, rich and amber in colour and looks good in the glass. The first impression is syrupy and very fruity. There’s a hint of peatiness in the finish, quite pleasant. The reading notes reveal the water for this Highland malt comes from a burn (stream) which is cold, pure and rich with deposits of real gold. The John Dewar distillery in Perthshire has a long history and this single malt is mainly used in blending their White Label brand. Now Aberfeldy, and a few other rare single malts, are being released under the Last Great Single Malts of Scotland banner.

Later in the evening, actually much later, we try the airport offerings. First, Old Pultney, which comes in a stylish bottle. When I asked a designer friend earlier in the year if there was any way to re-use all the beautiful bottles of Scotch from the bucket – we were redesigning the garden at the time, and I told him I hated to send some of the really pretty one off to the recycling – he replied that whatever we tried would be a cliché. Well, this bottle is only just opened so it won’t be ready for recycling for a while.

It’s a brisk taste with a lot of citrus notes. Usually, I’ve enjoyed this whisky, but I would rank it far behind the Aberfeldy. One’s tastes do change.

We end with a splash of Auchentoshan Springwood. This, by complete contrast, is a Lowland single malt. The distillery sits in the midst of barley fields outside Glasgow on the banks of the River Clyde. Once the Luftwaffe almost destroyed the centuries old site during the 1940s unpleasantness, the water for the cooling towers has been held in a giant bomb crater. The water for the whisky is piped in from pure Loch Katrine in the Highlands, which is cheating a bit, but saves us sippers from the pollution of Clydebank. Another feature of the malt is that it is triple-distilled, a trick usually found only in Irish whisky.

The whisky is light with a hint of sweetness from the bourbon casks. There’s no age statement, but it feels mature on the tongue and not rough like a young whisky. Like Old Pultney, the citrus flavour comes through strongly and pleasantly. Sadly, the Suntory group have taken control of this fine Scotch.