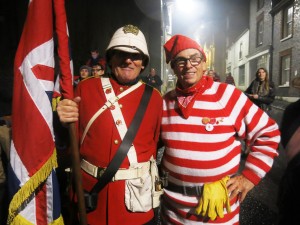 Remember, remember, the fifth of November … and the best night of 2015.

The day started well enough, with low scudding clouds whipping across the Sussex downs and the promise of rain holding off. I was in the market town of Lewes in East Sussex, which is renowned for the extravagance of its Bonfire Night celebrations, selling wristbands for the fireworks show later in the evening. By noon our money buckets were doing well and others took over for their shift, raising funds for the Waterloo Bonfire Society’s big show after dark. Later in the day it began to rain again and it looked as though we would be in for a wet parade through the town, but magically the drizzle quit just in time. Well fortified for a long evening, authentic smuggler’s costume donned, I set out from mum’s little townhouse for The Lamb, where our bonfire boys (and girls) gather between processions and activities, tingling with anticipation of the fun ahead.

It’s a strange coincidence that mum has returned to this ancient Sussex castle town after a lifetime spent abroad, as my dad’s ancestors were farmers on the magnificent Downs that surround the town. Their gravestones lie in a little churchyard nearby, but we’ve never been able to identify the farm’s actual location. However, mum’s residence and our ancestral roots, make me an authentic enough ‘local’ to qualify for membership in the Waterloo Bonfire Society, one of half a dozen in the town, which compete each year for the biggest and best bonfire and fireworks display.

It all commemorates Guy Fawkes’ Gunpowder Plot and the Protestant Martyrs of Lewes in 1555. I’ve written about it before in Fireworks over Sussex.

The day before, I volunteered to help douse about 5,000 torches with kerosene, to light the marchers’ way tonight. Sworn to secrecy, I also peeked into the barn where the main display in the procession was receiving a few finishing touches. Last year, word of the display’s identity got out and the no-sense-of-humour bunch who attend Nicola Sturgeon, tried to wreck the event when word got out that the group were going to take the piss out of her. Let’s hope the Prime Minister’s bunch have a better sense of humour, for it is he indeed who is being skewered this night. Once the story of David Cameron’s university initiation activities with a pig’s head got out, the construction crew and chief sculptor got building a massive almost naked Cameron with a piggy in his lap. The artist and a bunch of tough blokes will haul the effigy around the parade route for thousands of gathered townies and tourists to admire and then down to the fire site to be blown up … and blown up good.

WBS smugglers on the march

First the processions, and there are many. Burning brands in hand, we march uptown and back, hither and thither. Hauling our displays of political commentary and big carts of fireworks followed by burning barrels. It’s an exciting sight and thousands come to watch, perched in the windows above shops, or on the walls around the churchyards. Every now and then, the whole procession comes to a halt and a massive explosion of bangers is set off. Of course, no fireworks are allowed in the ranks (ha, ha), a rule more honoured in the breach than in the observance. One quickly gets used to massive and unexpected bangs beneath one’s boots, and learns to turn one’s head away to avoid the worst of the shrapnel. Thank goodness for spectacles.

Apart from the non-period glasses, I’m dressed as a smuggler, in the society’s official red and white striped Jersey. The idea being that when the forces of law and order try to identify any trouble makers, we will all look alike. The other societies adopt the same strategy, but with different coloured stripes. More magnificent are those in full costume, whether they are Mongols, Greeks and Romans or Tudor lords and ladies, or Victorian military in all their redcoat finery. Putting some order into our marching are bands, bands and more bands, lead at the head by our own pipe and drum band, with our very own pipe major, Hayden. When the pipes skirl away it brings a tear to my eye, or is that a bit of grit from the bangers?

In between many refills at The Lamb, I chat with old friends and new. One young couple are in the procession for the first time. He has been given responsibility for carrying a banner lit by burning torches on each side. He confesses that on the march up town the brands burnt out long before they arrived, so on the way back down I promised to back him up with a supply of extra kerosene soaked torches. My woolly cap got a bit singed re-loading the burning brands, but we got back to The Lamb unscathed and torches still aflame. 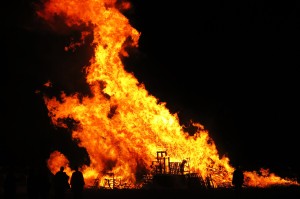 Finally it’s time to march down to the fire site, where throngs of the public, all wearing their fund-raising wrist bands, have gathered in their thousands. Well-fed by the dozens of chip and other food wagons and well lubricated by illegal supplies of bottled beer or hip-flasked liquor, they are ready for the big show to start. The bonfire is lit and in spite of the afternoon rain, cannot withstand the gallons of kerosene the captain of the bonfire has added to the mix. The flames are soon roaring 60 feet into the air.

Now’s the time for the truly non-PC part of the evening. The fake Bishop tries to preach from his stand and is immediately bombarded with hundreds of bangers until he is driven from his lectern. Next, the head of a Gunpowder Plot co-conspirator is blown up, followed in short order by the naked Prime Minister. Then the fireworks begin. As privileged members, we are inside the barricade that holds back the throng. I’m stupidly close and am soon engulfed in thick smoke and covered in burning embers from the assault on the sky. But my word, there’s no better spot to see a fireworks display from. Truly a thrilling evening in spite of the knee-deep mud.

As I proudly march back in one last procession to The Lamb, another burning brand flaming, I can’t imagine I’ll have a finer experience … until next year.