We’re at farmers’ markets checking out folks who might like to appear on my new television series “Market to Table.”

The St. Lawrence Farmers’ Market has moved from the ugly utilitarian North Building to a big white tent on a parking lot south of The Esplanade while the old market gets torn down and rebuilt.  This isn’t going to happen any day soon apparently, as there isn’t even a sign of a construction hording around the site, so I guess the tent is there for a while.

Our old friend Doug Webb has retired to Florida and his son Donald Webb has taken over Webb’s Farm and the family vegetable store. Donald’s pretty niece Emily has got a job at Tim Hortons and is much missed by the regulars. But even though they have less space than before, the family is holding on and the punters keep coming in spite of the location change. Donald agrees to appear on the show when we come back to tape at the market. One down and five to go. As a token of my gratitude for making my life easy, I buy a bunch of rainbow carrots, orange, red, gold, white and purple.

Wandering around the market we also meet Robert Taylor whose poster for The Potato Patch at Cedar Creek Farm claims he grows nearly 80 varieties of spuds and he personally grows all the potatoes he sells. He also agrees to appear on the show. I ask him for some spuds that will make great mashed potatoes and he recommends yellow Nicola, which offer really floury flesh when cooked.

With all my participants booked for this episode, and you’ll just have to watch the show to find out who else is participating, we made a quick stop in the main St. Lawrence Market, where we’d shot earlier for the series. At the Seafront Fish Market, Pina Amaral sold us some delicious wild Atlantic salmon filets. Pina features in another episode of the show, of course.

Sunday started with a surprise outing to the Indigo store on Bloor at Bay, where they have a marvellous black grand piano, miraculously in tune. Our young friend Petrina persuaded her mum Michelle to play. Michelle studied years ago at the Conservatory, but never realized her dream of becoming a concert pianist. At home, she plays for hours on her upright piano, or at night on her electronic keyboard with earphones, so as not to disturb the neighbours. 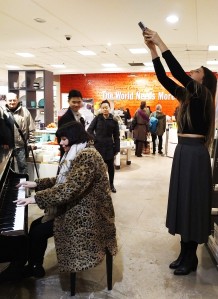 This day, she unselfconsciously perched herself on the piano stool in the midst of the busy bookstore, lifted the lid off the keyboard, and started to play. Within moments a crowd had gathered and whenever she paused between tunes, there was an enthusiastic round of applause. That wasn’t so surprising, given Michelle is really good, but what was amazing is the number of people who walked by glued to their cell phones, without glancing over to catch a slice of real life happening before their eyes.

To thank Indigo for their hospitality, I bought three books, including Sharpe’s Rifles, a missing edition from the Bernard Cornwell Napoleonic wars series.

Later Petrina joined us for supper and all the food I’d bought at the market on Saturday came into play, accompanied by a crisp bottle of Sancerre.

Tasty and so simple I’m not even going to publish a recipe!

It’s all about the picture

But here’s a few tips:

The downside of having dinner with me when I have a blog to write is that the photography comes first, so my apologies to guests if the food isn’t as hot as it might have been. But I did warm the plates first, so if I’d done the photography in the kitchen, as I often do, then no one would have been the wiser! 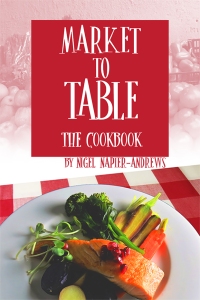