GIVING BACK TO THE COMMUNITY

“All that is necessary for the triumph of evil is for good men (and women) to do nothing.”

That’s how a good friend signs off his emails with the apocryphal quote by Edmund Burke. When we volunteer, even in a small way, it is the start of something. My good friend volunteers, and about 12.5 million other Canadians volunteered in 2011, up from 7.5 million in 1997. Estimates are that more than one-third of Canadians are involved in some sort of volunteer activity, which bodes well for our future. The sad part of the story is that volunteers are still desperately needed in areas that social welfare does not fully cover.

I’m reading an old copy of the now defunct Royal Bank Letter which was published between 1920 and 2008. In its latter years I was the RBC staffer responsible for its publication until budget cuts and the death of its principal essay writer sent it first online and then into dormancy. “In praise of volunteers” was first published in April 1982 and re-published in an edited form in June 2001.  It is still worth a read. Here’s the essayist’s key thought: “Money is a common measure of one’s success … much of the work that is done for money is worthless to anyone but those who profit by it. Voluntary service, on the other hand, is so valuable to its beneficiaries as to be literally priceless.”

We are in Puerto Vallarta, sitting round the pool with some new found friends. They are talking about their morning as volunteers at an orphanage. “We got more out of it than we put in,” Julie says. Her husband Steve agrees. Intrigued and touched, the next week we join them at Casa Hogar, a privately funded foster home for about 55 kids of all ages. It was founded 15 years ago by Senora Elisa Cornejo, a local resident who saw a need and took action. The single-storey building is in a semi-industrial area out by the airport (next to the Corona bottling plant, so it’s easy to find). It looks as though the compound might have been a former school. Our first impression is that these are happy, well cared for kids. The volunteer program reaches out to the visitor community through many links, including a Trip Advisor forum. 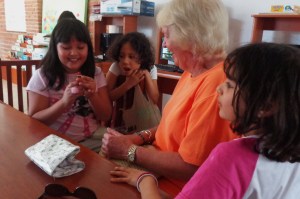 Getting joy out of lipstick

When we first arrive, we are taken around by another volunteer and shown the ropes. I notice a little boy, perhaps nine or 10 months old, not yet walking in any event, still lying in his crib. The staff haven’t got around to getting him back up after breakfast, so I jump in. Stinky little fellow. I change my first diaper in perhaps 30 years, more or less successfully. Another volunteer comes to the rescue as I’m finishing up. Outside we go and my new chum gets set up in a walker with a bottle of juice. He spills more of it down his front than he ingests, but soon he’s game for a push around the central courtyard, his little feet paddling away. Steve has two rambunctious boys attached to him in some game. I’m not sure if it is piggy back or steal his cap, but there are shrieks of mirth. Julie is well ensconced in the baby room where the youngest orphans get love, a cuddle and a bottle from the volunteer mums. Diane, who has never had kids, is a bit diffident and declines to join Julie in the baby room. But she quickly gets into the spirit of things hauling a lively little boy around in a cart. She tires of the game before he does and I take over for a while.

After an hour of the “hugs” program, we are off to teach English to a class of older girls. The three-mornings-a-week teacher is another long-time volunteer. He assigns each of us a couple of seven or eight year olds and without much structure we get to work. The girls show us where they are in their workbooks and we help them practice spelling, reading, writing and pronunciation using flash cards and our imagination. The best part of the morning was when Diane opens her purse and reveals a bright coloured lipstick. The four girls we are teaching pile onto her and she obliges with ‘lippy’ for all. When we leave they are getting ready for lunch and then change and off to school, where their uniforms help them blend in with all the regular kids. The next time we come we’ll bring treats for all to share. They have so little and everything we offer is well received.

Volunteer artist with the Inuit kids

This is not the first time I’ve volunteered to teach young kids. On a filming trip to Sanikiluaq, in Hudson Bay, two days of torrential mid-summer rain drove the entire Inuit population and our camera crew indoors. Grade 1 had assembled for some extra-curricular activity and I offered to teach a painting class. I’ve never seen a happier crowd of kids. The side benefit of the trip was that I brought half a dozen of the paintings back with me, got someone to sponsor the printing of posters (thanks RBC) , which were then sold through the Inuit art shop at Harbourfront. A dollar from each sale went back to the school.

Next up for me is a trip to St. Aidan’s Church in Toronto’s Beach area, where a fine group of people volunteer for Out of the Cold, as part of a wider program spanning 19 locations across the city and organized by Dixon Hall. I have been invited to help by a friend from our summer sailing community. Once a week during the cold season, about 30 homeless people sleep in the church hall, get a good supper, have showers and watch TV. At zero-dark-six the next morning half a dozen volunteers show up to cook and serve them a good healthy breakfast. As the newest member of the team, I’m junior assistant cook, but I enjoy my mornings peeling and chopping fruit, putting out cereal, toast and jam for cold breakfast and serving omelettes, sausages and hash browns to the hungry crowd as a hot breakfast.

On my latest visit a friend donates several dozen home made cookies, which disappear very quickly. There’s a zero tolerance policy for drinking, drugs and bad behaviour and a Dixon Hall health care worker is on duty all night to ensure all is well. The guests are quiet, by and large. They’ve had a good night sleep, a shower and as much coffee and tea as they want. Some are social and like to chat with us. Others sit in a corner alone, chowing down with a protective arm around their food. There are older people, though perhaps street life has made them look older than they are, and a young couple, and everyone in between. It breaks one’s heart to see them shuffle out into the cold after breakfast, but we’ve given them a good start to the day.

As with my other experiences, I get even more out of this than I put in. It’s not just the gratitude of those we help. Volunteers don’t expect any kind of reward or recognition. We do this because we want to, because we want to give back to the community that has given us so much. We volunteer according to our availability and ability. I’m told I give good meeting and know how to get things done, so I’ve been invited to sit on many volunteer boards, even chairing a couple of large not-for-profit enterprises. I enjoy teaching, so much of my volunteer work involves passing on some sort of knowledge to others. I enjoy writing, so some of my volunteer work has been helping with publicity and public relations for organizations which could not afford professional fees. I enjoy painting, so I’ve run watercolour classes for seniors (and Inuit children). I even spent my Friday nights for four years as a volunteer bartender at a social club for elderly performing artists.

There’s so much to do, and so much that can be done. Never give credence to the thought that one’s small contribution is irrelevant, or that the issue is so large that once can never make a dent in it, for every tiny bit helps. It may just be the one grain of sand that tips the scale and makes a child’s life better, a homeless person’s day bearable, or puts a smile on a senior’s face when they receive an unexpected visitor.

In Gilgil, Kenya, near Nakuru, where I spent my first working years as a journalist, a volunteer created the Restart Centre after the violence of local elections left thousands homeless. Mary Coulson, a long-time resident, noticed children living on the street, picking through the garbage for food. At the beginning she housed five children in a run-down shack and now cares for about 70. Her organization, the Sanata Charitable Trust, takes children, some just babies, right off the streets. She tells heart-warming stories of re-uniting siblings, boys and girls, under their roof. Ms. Coulson has acquired about 12 acres of land in the Rift Valley and hopes to build housing for up to 100 boys and 100 girls, thus breaking the cycle of poverty and crime which beset these abused children, and re-starting them on the road to a useful life.

Whether in Toronto, Canada’s Arctic, Mexico or Kenya, volunteers can make a difference. One act of kindness at a time. And if you can’t help in person, a monetary gift in the right hands is always welcome. I’ll leave the last word to that great comedienne Lily Tomlin: “I always wondered why somebody didn’t do something about that. Then I realized I was somebody.”

This article was originally published on March 20, 2013.