THE JOY OF FRESH 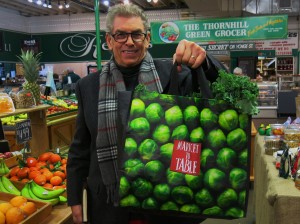 On location at the York Farmers’ Market

Diary: Shopping and shooting for my new TV series “Market to Table” in the farmers’ markets of Toronto has been a fresh food revelation.

As a Londoner, I’ve always loved street markets. I grew up near the Portobello Road market in Notting Hill, lived and worked near the Goldhawk Road market in Shepherd’s Bush and shopped at the historic Borough Market on the South Bank. Haggling over the price of fruit or listening to Cockney traders’ pitches was entertainment enough. There’s no doubt that the presence of markets enlivens cities and towns everywhere.

London has 99 markets, which create 3,000 jobs and serve eight million people. In Europe, markets abound. Barcelona, for instance, has 43 markets with 2,500 vendors, while Turin also has 43 open air markets plus six covered markets. Three hundred farmers commute into the city every day. I’ve enjoyed markets on my travels in Paris, Basle and Amsterdam. In Toronto there’s 33 farmers’ markets and its clear they revitalize communities and renew neighbourhoods. Cities all over the world are finding markets, particularly farmers’ markets, add value to the local economy and create active public spaces.

We love farmers’ markets and explore them at every opportunity. There’s something wholesome about the food, something honest about the farmers who bring produce they’ve actually grown themselves, something charming about the vendors who make and sell fresh foods. There’s usually a smell of fresh baked bread, buns or cookies, or the tantalizing odour of spices or herbs, or the earthy smell of root vegetables hauled just hours before from the field. The bright colour of greens just picked in the morning dew, or vibrant fruits fresh from the tree, fill the vendors’ tables. It’s all part of the magic.

Then add the benefit of local food that’s travelled less than a hundred klicks from the farm to the market or seasonal food that’s at its best at a certain time of year, where taste and nutrients haven’t faded on a long journey from far off lands, and farmers’ markets begin to make real sense to city dwellers. Farmers’ markets provide a connection for urbanites to rural communities and we are better off for it. 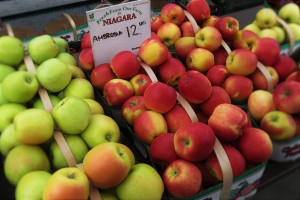 Even though we are still mired in the endless Canadian winter, half a dozen farmers’ markets in Toronto still run year round, which is a good thing for my new “Market to Table” television series, because we have to shoot six episodes and have them completed for Bell Fibe TV1 by the end of March. It would have been a much easier gig to wait until summer, when we would have had access to more than 30 venues, but the network wanted the shows for the spring and that’s that. With some diligent research, we found exactly six markets open in and around Toronto.

We’ve been to each market several times. The first time to discover what they were about, the second visit to convince them to let us shoot there, the third to confirm the dates with everyone and the last to shoot the episode. Some of the markets we’ve also visited with our guest chefs to select what they are going to present on the show and some of them are our favourites where we shop regularly anyway.

In the end, we got some very good interviews which went beyond the norm and delved into the world of local food, fresh produce and organic farming. When we finish taping the kitchen segments with our six guest chefs, we’ll start editing, so I’ll have to wait until then to find out if the shows work. Meanwhile, fingers crossed for a good outcome.

Each market offered something different. At one end of the scale was the massive and well establish Tuesday through Saturday St. Lawrence Market, named by National Geographic Magazine as the number one food market in the world. That’s a pretty serious accolade and the merchants at the market do their best to live up to their reputation. I have my favourites, such as Chris’ Cheese, and they’re all in the show.

The market’s little sister is the Saturday only St. Lawrence Farmers’ Market, currently housed in a huge temporary tent-like building, while their own building is demolished and re-built. That result is surely going to be some years away. Although the market moved into the tent last summer, there is still no sign of a construction hoarding going up around the old site. However, the farmers seem to like their temporary quarters and some say their business has improved since they moved. Farmer Robert Taylor grows and sells nearly 80 varieties of potatoes at Cedar Creek Farm and knows the benefits and cooking requirements of each one. Try getting that expertise in a supermarket.

At the other end of the scale is the tiny Thursday afternoon Dufferin Grove Organic Farmers’ Market, where the vendors who’ve survived from the big outdoor summer market have been squeezed into the skating rink house. In the summer there are perhaps 30 booths lined along the park’s tree lined paths. In winter less than a dozen huddle in the grim building. But the food is still fully organic, scrumptious and fresh and there’s always something different on offer. It’s here I first hear about Jaguar chocolate from Byron Koss at Chocosol, which blends three flavours of organically grown and ethically harvested Mexican chocolate, including albino cacao beans.

In the middle of our journey we visit the well-established Saturday Evergreen Brick Works Farmers Market. We catch up with them in the Fall, when the park is ablaze with colour and the market is huge, spreading out beneath the roof of one of the restored brick sheds. This one has become perhaps the largest market in Toronto, although it shrinks substantially in the winter months and moves indoors. When we visit the Brick Works, whether filming or not, we always enjoy a superb meal at Chef Brad Long’s Café Belong. We’re hoping the ultra-busy Brad will be one of our guest chefs on the show, but I fear he might be too much in demand elsewhere.

Also well established is the Saturday market at Artscape Wychwood Barns, organized by The Stop community food centre. Their café and greenhouse run all week and the market opens at eight o’clock sharp. No early shopping allowed here. We recognize several vendors from other venues here, and surprisingly they recognize us. More importantly, they’ve cleverly allowed knife sharpener Denzil Miao of Exact Edge to set up shop and he keeps my kitchen and chef’s knives razor sharp.

To find our sixth market, we had to travel north of Steeles to Thornhill’s York Farmers’ Market, a neighbourhood fixture since 1952, open Thursday through Sunday. It’s small but the vendors are permanent and when I say friendly, that’s an understatement. While we’re filming, we’re constantly offered fresh food and hot food, from tasty falafel to chocolate cup cakes. Everyone goes out of their way to be helpful and just plain nice. In the summer, a huge garden centre opens in the parking lot. We meet a brother and sister, Tom and Irene Batsas, who have adjoining butchers and greengrocers. 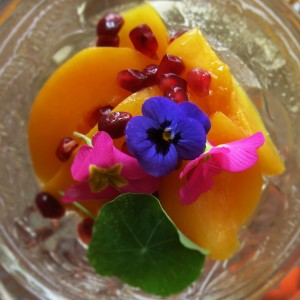 What we hope to get into with each chef is an interesting, thought provoking and informative dialogue about food. Where does it come from; are the animals raised in a natural environment; are they treated well when they go to the abattoir; what goes into the food we eat; what chemicals are used to control pests and weeds; does it matter and does it make a difference; are we eating too much; are we eating junk; are our children suffering because we’re setting bad examples; do kids and adults have to be obese; does local food matter; can we survive by eating seasonally; does food taste better when its in season; does fresh food make a difference; and many more questions.

PETALS AND SPROUTS ENHANCE MANY DISHES 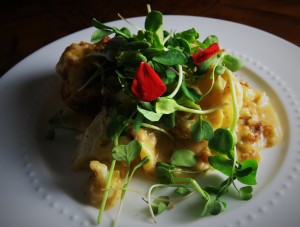 Fresh flower petals from Elizabeth Foers at the Wychwood Barns farmers’ market decorated my dessert last weekend and her sunflower sprouts topped my shakshuka tomato and egg dish prepared for a friendly Sunday brunch. I’m a new fan of edible flowers, nasturtiums, violas and some little purple blossoms, whose name I forget and that’s my recipe tip this week. Throw sprouts on everything that leaves the kitchen for an extra taste lift and crunch, and nutritional benefit, and flower petals for decoration on anything from peach dessert to cauliflower cheese.

We also got a good package of sprouts and petals from Sandra Dombi at Kind Organics, whom we met at both Wychwood and Dufferin Grove. Busy lady and super provider of sprouts and baby greens. One sprout, she tells me, can contain as many nutrients as the whole mature plant.