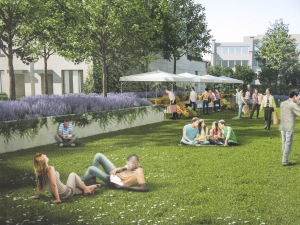 “A great neighbourhood isn’t only quantified by its amenities and walk score. More notably, it is defined by the people who choose to exist there, and the crowd at Avenue and Davenport is nothing short of first-class.”

That’s the opening of the latest marketing salvo from Freed Development promoting their new property on Davenport. It’s nice to know they want to move into our neighbourhood and that they think we are first-class folk, but I hope we do more than “exist” here. Perhaps when they’ve finished mucking up our triangular block with their faceless, ugly cookie cutter tower, we will just barely exist.

When I said at a recent residents’ association meeting that what was most appalling about Freed’s approach is that he is offering a 10 storey, 35-unit building in space currently occupied by three houses, zoned only for a four storey building, no one seemed very suprised. He hasn’t even got planning permission but still sends out glossy brochures, advertises in the local rag and bombards all who will listen with email updates.

Commented one neighbour: “The developer can say anything he wants to get as many pre-sales as he can. Buyers just sign an agreement that things may change. Pre-sales are needed to get financing. Nothing can be done about that.”

Well I disagree. Something can always be done when the system is clearly flawed. Just because it has become common practice for developers to promise the moon and open a sales office before they’ve even got permission to build, doesn’t mean it is right. It may not actually be against the law, but it certainly skirts the definition of unlawful very closely. Said another neighbour: “I wonder if pre-selling without a permit is legal? It’s like taking deposits on the Brooklyn bridge!”

Freed continues by announcing that “the campaign for Davenport follows five of the most vibrant personalities that exist nearby. We’ve asked these local celebrities what it is they love about this area of Toronto and why they chose to operate here, while finding out some incredible local insights to the broader world of fashion, dining, beauty, design, and art.” I’m so glad we have “vibrant personalities existing nearby.” It makes my little heart flutter with excitement. Even I am interested in why they “operate here.” I’m not sure it will help sell condos, but I’m sure these un-named celebrities will be earning their 30 pieces of silver to help drive another spike into the heart of our Annex.

An earlier promotional piece had us falling about laughing at the content. It tells us “Your inquisitive nature is about to be rewarded” before “the public sees the illustrious interior views of this spectacular address.” I’m watching them build a horrible great block of a sales office at the back of the three derelict houses that front on Davenport. All the work is going on in the very narrow lane between the development and our garden and trucks are coming and going with increasing frequency. I can’t imagine the aesthetic they will bring to the design if this is how they have started.

Let’s parse out the visuals, which they note in mice type at the bottom of the page are only artists’ concepts anyway. The horrible interior rendering tells us absolutely nothing about anything, and doesn’t even make an effort to match the architectural rendering or show a possible cityscape. The latter is just lazy as they have views from every floor already, as I noted in an earlier article about the blimp photographer.

Another in the group cracks: “To even send this out to potential buyers is stupid and insulting.” The good news is that if Freed insults enough potential buyers, perhaps he won’t meet the criteria for financing. The bad news is that eventually something bland and run of the mill will get built, will probably be 10 storeys high, and will be filled with people who believe, incomprehensively, that they are getting “luxury built for buyers.”

I’m not entirely sure which side of the fence our councillor sits, but at least he is trying to open up a dialogue in the neighbourhood, by sponsoring local meetings in church halls and local hotels. Our little triangle has suddenly become hot property with numerous developments planned along Davenport.

Five storeys of office infill hunkers down on our lane

On the corner, where we have a pleasant green space and big trees, although it is part of a social housing building, a new 28 storey tower and 56 town homes are proposed. A few yards down the street there’s a proposal for a 10 storey building with 84 dwelling units, ground floor commercial or retail and 48 parking spaces. Next there’s the Freed building: another 10 storeys planned with 35 units, ground floor commercial and 57 underground parking spaces.

Steps further along, a tiny house wedged between two existing buildings has been bought by another developer, who merely proposes an eight storey building and more parking. Finally, an infill building has already been approved with a nominal address on Dupont, but in reality lane access only. It’s designated as office space over five storeys, with yet more parking spaces on the ground floor. All these new cars will also exit onto the lane, causing further congestion, especially when delivery trucks block the lane completely.

Heaven help the neighbourhood when construction starts. Perhaps the local celebrities can give us some of their “incredible local insights.”

Featured image: The building on the left exists, and currently all to the right is a park, much shrunken in the proposal by the addition of a new tower and townhouses