A LIGHT AND FLUFFY DISH 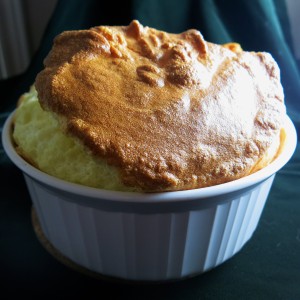 Put something light and fluffy on the table. (And I don’t mean the cat!) It’s much easier to make a cheese soufflé rising three inches out of the dish and a delicate golden brown on top, than it looks.

As I wrote in my 1974 cookbook: “The mystique surrounding the classic French soufflé au fromage is enough to deter the most daring beginner. But do not be deterred. It’s easier than it looks. And when you make it you will be acclaimed a hero.” Well, those were gushing times and soufflé seems to have gone out of fashion in our rushed society. But in fact, this is a very satisfying dish and a lovely light meal with a simple salad on the side.

In How To Eat Well and Stay Single, I went on: “A word of warning though. Occasionally, something will conspire against you (perhaps the wrong oven temperature or less than fresh eggs) and your soufflé won’t rise much, so for this reason don’t ballyhoo about your prowess in advance. Let the success speak for itself, and put the semi-failures down to experience.” Still true today.

Two things got me thinking about soufflé. The first was when we were dinner guests with new friends recently and they bravely served individual soufflés as an appetiser, and second when I was reviewing my promise to finish uploading all the recipes in my original cookbook to Gentleman’s Portion. I’m being a laggard in the latter effort, as so many new and exciting recipes pop up, but with this story, I’ve knocked yet one more off the list.

I can’t steal Steve and Anne’s appetizer trick, but I have another suggestion. If you are feeling more adventurous, try a chocolate soufflé as a dessert. While this works well in a large soufflé dish, it makes for an even better presentation in individual dishes. Large ramekins should do the trick.

Whipping up some egg whites about 2005

Since the timing of a soufflé is so crucial, it would be asking for trouble to serve anything that needed cooking along with it, in case it wasn’t ready at the same time. I suggest you serve it just as it is so nothing fights with the delicate flavour and serve a fresh green salad afterwards in the French manner. You can also serve cheese soufflé as an appetiser course.

TIP: Separating eggs
Start with the eggs at room temperature. Crack each egg in half gently over the bowl that is to contain the whites. Hold the halves of shell close together and tip the yolk, without breaking it, from one half to the other allowing the white to dribble into the bowl below. When all the white is separated tip the yolk into the other bowl. If any pieces of shell get in, remove them immediately or you might forget.

ROUX – Basic ingredient of French sauces
Melt 1 tbsp butter over a medium heat and when the butter is just beginning to foam, add 1 tbsp white flour and stir with a wooden spoon for about 3 min until the mixture is crumbly. Then slowly stir in 1 cup of the appropriate liquid to complete your roux, whisking briskly to ensure the sauce is smooth.

Roux as a basis for Bechamel sauce: to the butter and flour mixture, slowly add 3/4 cup of whole milk that has been heated to just before boiling, whisking continuously until very smooth. Season with about 1/4 tsp freshly grated nutmeg and salt to taste. This is the basic white sauce of French cooking. Some recipes also call for a clove and a bay leaf to be simmered in the milk while it is warming up to near boiling. These are discarded before the milk is used in the sauce. Great served over any white fish, with chopped parsley added for a PARSLEY SAUCE.

Roux as a basis for cheese sauce: to the butter and flour mixture slowly add 3/4 cup warmed whole milk, whisking continuously until very smooth. When the sauce has thickened, remove from the heat, add about 1/4 lb or 3/4 cup of grated strong cheddar cheese. Stir together off the heat or over very low heat until the cheese melts. This is the basic sauce Mornay of French cooking. Great served over veggies such as broccoli or cauliflower, or used to make CHEESE SOUFFLÉ, MACARONI AND CHEESE or SCALLOPED POTATOES.

Roux to thicken bœuf bourgignon: use 1 tbsp butter and 1 tbsp flour for each cup of beef stock. Add strained stock to the roux and stir gently. This is the basic brown sauce of French cooking, which us amateur cooks call gravy. When it thickens add the sauce back into the stew.