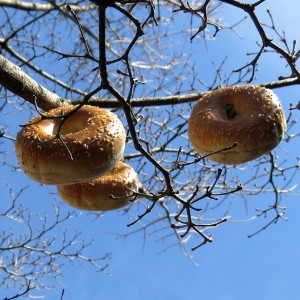 With a late ice storm forecast, the Slobbovian bagel harvest might be doomed.

It’s before dawn and my camera crew and I are crouched behind a hedge in the misty air, waiting for the peasant farmers to arrive. On the other side of the hedge trees just coming into leaf stretch away into the gloom. The trees are heavily laden with fresh bagels. Unlike apples and other similar crops which grow and are harvested after the trees blossom, bagels are left on the trees to mature through the winter and are harvested after the danger of frost has passed. No frozen bagels here. The location of the bagel orchard is a heavily guarded secret, somewhere in middle Europe, and we are on assignment from CBC Television to make a short documentary about the unique harvest.

A tractor appears and drops two hefty ladies off at the gate to the orchard. We film their arrival and then watch as they tackle a hearty breakfast before getting down to work. Wine skins come out and after a few swigs, they haul large baskets onto their backs. They work in companionable silence for a while, picking off the lowest hanging bagels first, moving from tree to tree until their baskets are full. Then they tip the bagels onto a large canvas sheet lying on the ground. As the crop begins to pile up, we notice they are swigging more and more from their wine skins.

We reveal ourselves to the two women. Peter Wenzel, our cameraman, is originally from Germany, and manages to find some common linguistic ground to explain what we want. We’ll call them Olga and Marsha and when they realize we mean no harm, they allow us to continue filming.

Now, it’s time for them to use different tools to harvest the bagels at tree-top level. Long poles ending with sharp cutting knives come into play. Olga slices while Marsha catches the crop in her basket. Sometimes Marsha has to hold a branch while Olga manoeuvres the cutting tool. Very few get dropped on the ground, but when they do, they shyly offer them to us, explaining that bruised bagels can’t go in their baskets. A bit of dirt brushed off and, excluding the damaged bits, the freshly picked bagels are delicious.

Marsha shows us some extra tricks, throwing a small grappling hook on the end of a long line up into the tree to pull bagels off. Olga catches these wild flying bagels with grace, turning and twisting her basket to land the really tricky ones. We get everything on film (this is in the days before video, remember) and I’m already planning how our story will edit together. I smell success. Well, actually, I smell fresh bagels, but the story has the feel of an award winner. If the Canadian Screen Awards had existed then, I am sure we would have been nominated. We’ll have to settle for an ACTRA Award “Nellie” instead. 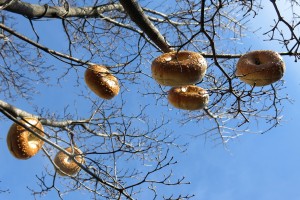 Under a tree laden with bagels, we join Olga and Marsha for a huge peasant lunch. They unwrap kerchiefs filled with succulent slices of garlic sausage, soft goat cheese, pickles and olives and invite us to help ourselves. We pick our own bagels, tear them open and slather on the offerings. In return, we offer them the packed lunches we have from our hotel. They have a good laugh at the peanut butter and jam sandwiches, cut into cute little triangles with the crusts removed. But they love the imported chocolate bars and we let them have them all. For the children, we gather, through Peter. At least, we think that’s what they say. Perhaps they were for the pigs.  The ladies pass the wine skins around. They contain over-proof slivovitz, home-made plum brandy. A few swigs and we’re wrecked.

Our filming ends when the two ladies stagger off for a good nap, to await the return of the tractor.

Our doc aired on CBC Television, with narration penned by that outstanding Canadian etymologist Bill Casselman and narrated by Bob McLean on his eponymous daily show, which I also produced. And yes, dear friends, it was broadcast on April the first. We got letters.

Curiously, while we were filming in a Mississauga apple orchard, cleverly disguised with props and costumed actors as a Slobbovian farm, a news crew from CTV came along and asked us what we were doing. We’re filming the bagel harvest, we explained. Could they film it too? Of course, I replied, straight faced, as long as they didn’t air it before us. They didn’t ask a single question but diligently set to work. And sure enough, it appeared on their local news later, with a completely straight-faced commentary.

The orchard no longer stands, now covered by yet another example of urban sprawl. But I will never forget the day when half a dozen CBC propsmen spent the whole night wiring 5,000 stale bagels to the trees.

Pranks are staple fare for the first day of April in many parts of Europe, a custom dating back to medieval times, and mentioned in Chaucer’s Canterbury Tales in 1392. I have not been a great prankster in my life, but I always enjoy a good bit of fun. Our bagel harvest was seen by most as a joke, but was taken seriously by a few poor unenlightened souls. 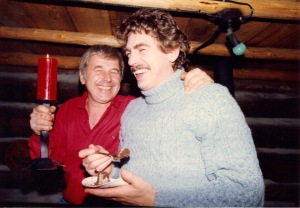 After the shoot cameraman Peter and Nigel get happy

UPDATE: Peter, our cameraman, who filmed many series with me, is sadly no longer with us. Jan, our senior propsman, died many years ago. Bill however, goes from strength to strength and has written a dozen books or more, mostly about words and amusingly written.

Evidence of other silly things Bill and I have done together can be found in this Peasant Shoot skit on YouTube. Check it out!

Slobbovia was created by cartoonist Al Capp for his comic strip Li’l Abner, and first appeared on April 4, 1946.

This article was originally published on April 1, 2013 with new location pictures courtesy of the Slobbovian Bureau of Agriculture April 1, 2016