WINE, WINE, EVERYWHERE, NOR ANY DROP TO DRINK

Common sense would tell you that you simply can’t drink 50 wines before lunch, but the 2002 vintage Château Robin stands out.

My vinous adventure in Cannes continues.

In my three previous posts, A long and winey road, On the road to Cannes and A spiffy gig, I related how the Alcohol and Gaming Commission of Ontario had ordained that we could import booze into Ontario and then for some unfathomable reason we had been invited to an all-expense paid wine tasting event in Cannes. It was our second day as we awoke in our splendid suite at the Carlton Hotel … somewhat worse for wear. The culprit was the open wine tasting and gala dinner the evening before. Oscar Wilde so aptly put it, “I can resist anything except temptation.” As we prepared for breakfast and the day of meeting vintners that lay ahead, I vowed to make full use of the spittoons along the way. But, who could foresee the temptations that lurked ahead?

Here’s how things worked. We were to meet a different winery representative every twenty minutes starting at 9:00 am. These good folks, who were sponsoring this boondoggle, were stationed randomly in rooms throughout the hotel. These were also their bedrooms and, due to the high cost, were often shared with another producer. We had scheduled breaks along the way, but the organizers had plugged these gaps with potential suppliers in which we were not very interested. But, fair enough.

Two things came to mind during breakfast. The first was to eschew any coffee. It would spoil our ability to effectively taste the wine. As to the second, I had read somewhere that professional wine tasters always tote a piece of bread along in their pockets and take a great sniff of same between slurps. Mind, I had never seen anyone actually do this, but I did recall learning in a science class somewhere that the sense of smell plays a large part in one’s ability to taste. It did seem plausible. And, I really wanted to look pro. I certainly couldn’t spit a mouthful of wine neatly into a cup placed at my feet like the super tasters. Truth be told, I was known to dribble down my chin when availing myself of a spittoon, which was why I tended to wear dark, patterned shirts and tweed jackets when tasting. So, I loaded up my jacket side pocket with fresh baguette. Oh sure, I looked even lumpier than usual, but that was a small price to pay for authenticity.

We arrived at our first tasting on the dot of nine, me armed with my Moleskine notebook and sporting a suspicious bulge in my left jacket pocket. It was a Spanish winery called Bodegas Protos from the Ribera del Duero wine region in the north of Spain and we were greeted by Carlos Villar (who 10 years later is now the Director General of the estate). After brief introductions, Hélène chatted with the most amiable Carlos while I set to work (slavishly, I might add) sampling his line of fine wines. I was particularly enchanted with the barrel fermented Protos Verdejo, a rich, fruity, spicy white. I have to admit that this one did not wind up in the spittoon, but instead, as our then two-year-old daughter Katie once said about the disappearance of her chewing gum, “It fell into my tummy!”

Hélène interrupted my reverie by announcing that Bodegas Protos was already happily represented in Ontario. Drat. So, I closed my Moleskine, thanked Carlos and then, noting we still had a few moments remaining, paid some attention to the other producer in the Carlton suite. They were a couple of young men offering candy-coloured Armagnac – lime green, canary yellow and azure blue! “They are dyed these colours to appeal to the youth market,” they proudly explained. “It’s not going to work,” I muttered to myself as we left for our next appointment. Obviously I was incapable of appreciating this developing trend in hard liquor marketing. For now, treasures such as ‘Crown Royal Regal Apple’ and ‘Crown Royal Maple Finished’ rye whiskies grace the LCBO shelves!

There was a swarm of folks waiting at the elevators trying desperately to get to their next sessions. It was going to take half of our allotted meeting time just to get to our second rendezvous. But then the ever resourceful Hélène suggested we use the stairs, which we did. Between the fifth and fourth floors we crossed paths with a very tall, handsome fellow who by his name tag we discovered was none other than Courtney Winte, Head of European Wines – General Listings for the LCBO. We quickly introduced ourselves and mentioned that we would love to meet with him during the next couple of days to find out more about becoming successful Ontario wine import agents. As we hurried away, we left him standing there looking like the deer that was caught in the headlights of a ‘Peterbilt.’ We wondered why? 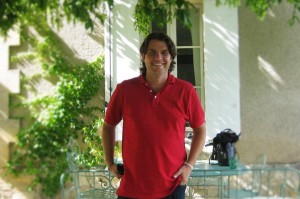 The morning progressed exhaustingly. Meeting new vintners and tasting six to ten wines every twenty minutes while dashing up or down flights of stairs between sessions is more onerous than it would seem. It was a blessed, albeit rare, occurrence when consecutive appointments were on the same floor. But we did encounter many a tasty little devil as we ploughed on. One such delectable dollop was presented to us by Jérôme Caillé, who also told us that he thought we were on the right track with the notion of a wine club. The wine was a 2002 Château Robin from the Côtes de Castillon (since renamed Castillon – Côtes de Bordeaux) wine region adjacent to the better known St-Émilion appellation on the right bank of the Dordogne river in Bordeaux. Permit me to tell you about it (I must confess that a bit fell into my tummy).

The 2002 vintage Château Robin was blended from 60 per cent Merlot, 30 per cent Cabernet Franc and 10 per cent Cabernet Sauvignon. It was aged in new French oak barrels (50 per cent), oak barrels that have been used once before (25 per cent) and the remainder in vats to maintain the fruitiness of the wine. It was a dark red, almost black wine that displayed dried plums and blackberries, almonds, smoke and vanilla on the nose. In the mouth there was an explosion of flavours that included blackberries, raspberries, toast and liquorice. It had great concentration, was full, dense and round and was exceptionally well-balanced. This wine had everything one would expect from a cru classé at a much higher price. It won a gold medal at the Concours Général Agricole de Paris, 2004 and was also included among the Top 100 Bordeaux by the Bordeaux Wine Bureau. A few months later we presented it to our wine club at $24 the bottle.

Finally it was time to break for lunch, and man did we need it. We had just sampled over 50 different wines (not to mention some candy-coloured Armagnac). After the first 20 or so they all became a blur. My entire mouth felt like an old tennis ball. For the life of me I can’t image how anyone’s palate can discern anything after the first dozen or so slurps –spittoons or no spittoons. There would be no wine at this meal.

As we entered the ballroom once again, we spied a table set for eight with only two people at it. And, guess what? One of them was Courtney Winte! The other was an attractive middle-aged blonde who commanded Mr. Winte’s undivided attention. How wonderful. Now we were going to learn all the secrets of being successful with our LCBO partners. “May we join you?” I politely asked. There it was again, the ‘Peterbilt headlights’ look! As I sat down beside him, Mr Winte turned his chair and back towards me and didn’t say a single word to us for the remainder of lunch! I did overhear him remark to his companion that he wished he knew how to taste wine. Such was our inauspicious introduction to the inner circle of the LCBO.

That afternoon went much like the morning with a seemingly endless succession of interesting wines to sample. My taste buds had long since conceded defeat and were bravely going through the motions as glass after glass of the fruit of the vine was proffered. But, I must tell you of something quite wonderful that occurred. By sheer luck we were in conversation with a very successful agent from Quebec when a distinguished looking gentleman in a dove-grey velvet suit approached him and asked if he would like to attend a special tasting of his wines after the day’s sessions were completed? I guess we had inadvertently (wink, wink) and successfully put on our best ‘can we come too’ looks and received the invitation as well. The gentleman turned out to be Jean-Noël Boidron, the owner of Château Corbin Michotte and Château Calon, the former a St-Émilion Grand Cru, the latter a Montagne St-Émilion. Here is what he bestowed upon us: from Château Corbin Michotte, the 1955, 1964 and 1966 vintages; from Château Calon, the 1951, 1953 and 1955 vintages! “Too bad Cousin Robert couldn’t be here,” I shamelessly chortled to myself. 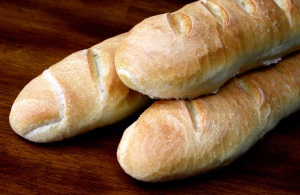 Baguette to the rescue

I desperately needed to resurrect my exhausted taste buds, so I hauled out the chunk of baguette from my jacket pocket and began to inhale deeply. M. Boidon cast me a worried glance and inquired if I were hungry? “I can find some crackers?” So much for authenticity. However, I can happily pronounce that his wines were sheer ambrosia.

I see that I have exceeded my allotted space, so will sign off till my next post when I will tell you about the remainder of our stay at the Carleton – the disheveled English ex-banker, the vintner who slept with her vines, the irresistible Italians and the gift of the forks! I do hope you can endure the wait.

PS: Click here to find out about our current wine club offerings; I assure you a sensory treat awaits!